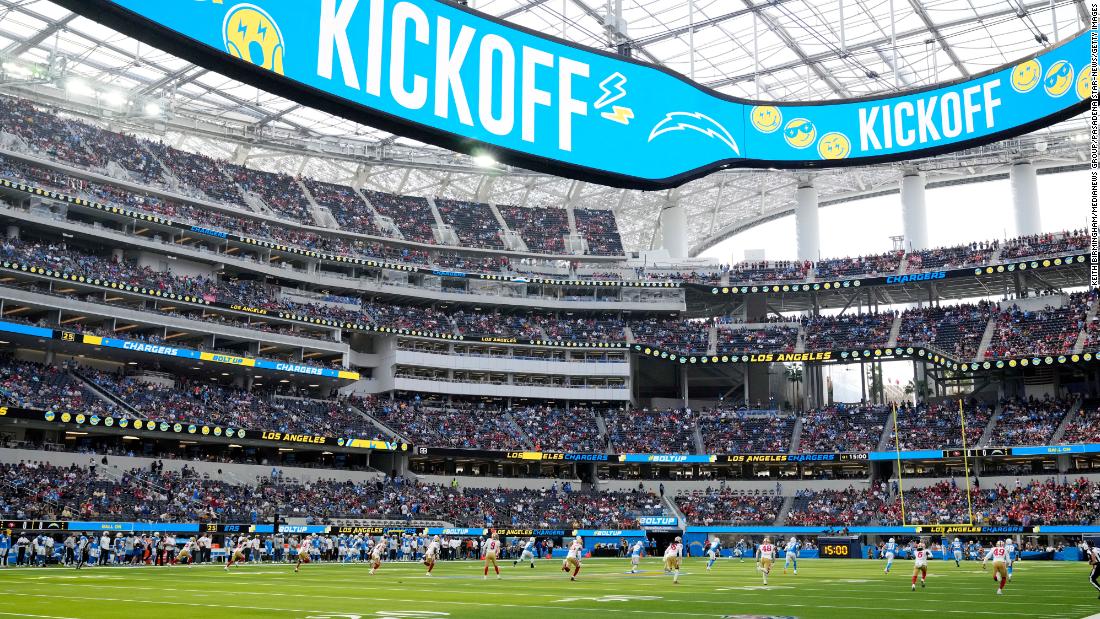 “Our challenge is right now — we are in a major surge,” said NFL Chief Medical Officer Allen Sills during a recent media call. “It is no secret. … what the impact of the Delta variant is having.”

It’s the league’s second season during the pandemic, but this time around, it looks different. For one, there’ve been preseason games, with fans in attendance cheering on the latest iteration of their squad.

This wasn’t the case in 2020 when the exhibition season was canceled. This summer featured just three weeks of preseason games with some teams requiring spectators to have either proof of vaccination or a negative Covid test for entrance.

Last season, the league did not cancel a single game over its 17-week season, despite a number of postponements. Building on that success, the 2021-2022 edition will feature the first-ever 18-week, 272-game regular-season.

However, should teams run into a Covid-19 outbreak during this historic year, a new policy implemented during the offseason means teams could risk a forfeit should a game need to be called off due to an outbreak among unvaccinated players.

While it remains to be seen how the pandemic will impact this season, the 32 teams have prepared as normally as possible to compete in their quest for the Vince Lombardi Trophy.

“Our job is to be ready to roll, physically and mentally, when the season rolls around,” says quarterback Baker Mayfield, whose Cleveland Browns snapped an 18-year postseason drought in 2020. “You just need to iron out all the little details, and we’re on pace to do that.”

While teams and players work on the small things, here are the big headlines to watch before the final two teams meet at SoFi Stadium in Los Angeles for Super Bowl LVI on February 13, 2022.

The league wants to require Covid-19 vaccinations for all players

While players are currently not required to get the vaccine, unvaccinated players must follow stricter protocols than their vaccinated counterparts.

As of late August, the league says that 93% of players are vaccinated, and teams like the Atlanta Falcons have reached a 100% vaccination rate. Citing the unpredictability of the Delta variant, the league would like to see the Falcons’ unanimous participation mirrored by every player in the NFL — calling for a league-wide vaccine mandate.

In August, NFL deputy general counsel Larry Ferazani said the NFL has been discussing with the NFL Players Association making the vaccine mandatory for players. “We’d still love to see that mandate go into effect tomorrow,” he said.

After his stunning departure from the New England Patriots, Tom Brady took his talents to Florida, switching conferences to play for the Tampa Bay Buccaneers.

After an up-and-down start to the season, the Bucs rolled off four victories to end the 2020 season to clinch a playoff spot. They kept the streak alive in the playoffs, culminating in a dominating 31-9 victory in Super Bowl LV over the Kansas City Chiefs.

It was Brady’s seventh Super Bowl title, the most ever by an NFL player, but the league’s oldest player has his eye on a history-extending eighth ring.

One thing the veteran has surprisingly had to work on is being vocal. When a reporter noted his raspy voice in a press conference, Brady laughed and said he was hoarse from barking out signals all day. “It’s good in the morning, but by the time practice ends… you have to get your voice in shape too, along with your legs and everything else,” Brady said.

“Other than that — feeling strong, feeling good.” In a juicy subplot to this season, Brady will return to New England in Week 4 to face his former team.

READ: Tom Brady signs new deal with the Tampa Bay Buccaneers
The five-time MVP leads a strong offense that features pass-catching threats Mike Evans, Chris Godwin and former New England teammate Rob Gronkowski, all of whom had over 600 receiving yards last year. Out of the backfield, Ronald Jones II ran for just shy of 1,000 yards and was complemented by Leonard Fournette, who accounted for six touchdowns.

But Tampa Bay won’t be a slouch on defense either, led by the fearsome linebacker trio of Jason Pierre-Paul, Devin White and Shaquil Barrett — who all had at least eight sacks last season.

Best of the Rest: Who can dethrone the Bucs?

The Kansas City Chiefs haven’t had a losing season since head coach Andy Reid joined the franchise in 2013. What was a solid offense under the direction of quarterback Alex Smith has exploded with the arrival of Patrick Mahomes, who has both the regular season and Super Bowl MVP awards to his name.

Mahomes has plenty of people to throw to, though Travis Kelce is his favorite target. Kelce’s 1,416 receiving yards were the most by any tight end in 2020 and the second most in the league overall. With running back Clyde Edwards-Helaire looking to build on a strong rookie year, the Chiefs potent offense should have them in contention again.

Mahomes and Reid have never won less than 12 games during the QB’s three years as a starter, and they’ll be looking to avenge their Super Bowl loss.

The Buffalo Bills have been slowly building a winning culture since hiring head coach Sean McDermott in 2017 and drafting quarterback Josh Allen the following year. Allen had a breakthrough season in 2020, throwing for over 4,000 yards and 37 touchdowns while running for over 400 yards.

On top of that, he even caught the first pass of his career, turning a trick play into a 12-yard touchdown against the Arizona Cardinals. But McDermott and Allen couldn’t get past Kansas City in the conference championship game, leaving them to regroup for this season. Luckily, Allen has Stefon Diggs, who caught a league-leading 1,535 yards last year.

The club will look to take another step towards becoming an elite-level team this year, and it could be a conference finals rematch in the works in the AFC.

READ: Steelers star JuJu Smith-Schuster on dealing with haters – ‘Use as fuel to build more fire to the flame’

Though the Green Bay Packers never led in the 2020 NFC Championship, they were just one score away from defeating the Bucs. It was the second-straight season losing in the conference finals for the Pack and another missed opportunity for the legacy of quarterback Aaron Rodgers.

The 17-year NFL veteran is searching for an elusive second title to add to his 2010 victory. Rodgers will again suit up for Green Bay after offseason rumors speculated that the star QB had requested a trade due to differences with club management.

Despite winning his third MVP last season, Rodgers is in the twilight of his career but says that techniques for positive thinking have maintained his longevity as much as physical fitness. “I had an old coach who used to encourage us, when I was a young basketball player, to visualize and think about the type of plays we want to make,” he says.

Fully comfortable in his game, he’s been utilizing training camp to both refine and experiment with his game: “It’s a fine line – I like testing things, making dicier throws than I would in the regular season but it’s also about finding the muscle memory to be able to repeat those throws or pocket movements.”

Rodgers and the Packers will look to finish atop the NFC North for a third straight year since head coach Matt LeFleur took over.

A trio of quarterbacks leads bookmaker odds for Offensive Rookie of the Year.

Jacksonville’s Trevor Lawrence is emerging from a storied career at Clemson University, where he was an All-American and won a national championship. The first overall pick of the 2021 Draft has a bit of a task on his hands to improve on the Jaguars’ dismal 1-15 record from last year.

After losing the first two games of the preseason, Jacksonville drubbed the Cowboys 34-14 in their final preseason tune-up, with Lawrence throwing two touchdowns. Lawrence said after the win, “It’s one step in the right direction. We have to keep getting better, because now they’re going to count for real … but it builds a lot of confidence going into the season.”

Meanwhile, the Chicago Bears have moved on from the second overall pick in the 2017 draft, Mitch Trubisky, by drafting a new signal-caller in Justin Fields. Fields, who played college football at Georgia and Ohio State, lost only two games in his entire college career and looks to bring stability to a franchise that has had an up-and-down decade.

Fields dazzled fans in the preseason, tossing 3 touchdowns with 0 interceptions.

Except for a singular Super Bowl appearance in 2019, the San Francisco 49ers have been inconsistent recently, and some of those issues have stemmed from the QB spot. But rookie Trey Lance looks to have bookmakers intrigued with a possible early success story.

Lance hopes to carry over his winning ways from college ball, as the Minnesota native won two national championships in the second-tier division of college football known as the FCS. He will battle for the starting spot with former 49ers starter Jimmy Garoppolo, who missed much of last season with injury.

In other positions, look out for the Atlanta Falcons’ Kyle Pitts and the Dallas Cowboys’ Micah Parsons. Pitts, a tight end from Florida, was the first non-quarterback offensive player drafted in this past April’s draft and will look to become an immediate receiving target for veteran QB Matt Ryan.

Now with “America’s Team,” Parsons opted not to play college football during the 2020 Covid-impacted season, but the linebacker out of Penn State University was impressive enough during his 2019 campaign that he is the betting favorite to win Defensive Rookie of the Year.

After a year away, the NFL returns to Europe

The NFL’s International Series is back after the pandemic suspended the European games in 2020. Hosted at Tottenham Hotspur Stadium, four teams will face off in two consecutive weeks in the middle of the season. First up is the New York Jets versus the Atlanta Falcons, followed by a Florida rivalry as the Miami Dolphins face the Jacksonville Jaguars.

While a YouGov poll ranks the Dolphins as the third-most popular team in the UK, the Jets, Falcons and Jaguars are less popular and well-known — though that’s likely to change after the games. With an average attendance of 72,260 at the 2019 games, the NFL will look to continue to build its fan base across the Atlantic.

And it doesn’t just stop at the UK with British reports suggesting seven German cities are interested in hosting the league in the future.

The 2020-2021 season features no less than 15 Super Bowl rematches. The 102nd season opener isn’t one of these but it could be the most talked about.

Thursday sees the Dallas Cowboys face the Tampa Bay Buccaneers on a night the Bucs will commemorate the franchise’s February championship — will Brady show early on that he has enough left in the tank for yet another title run?

There’s only one way to find out … let the games begin!