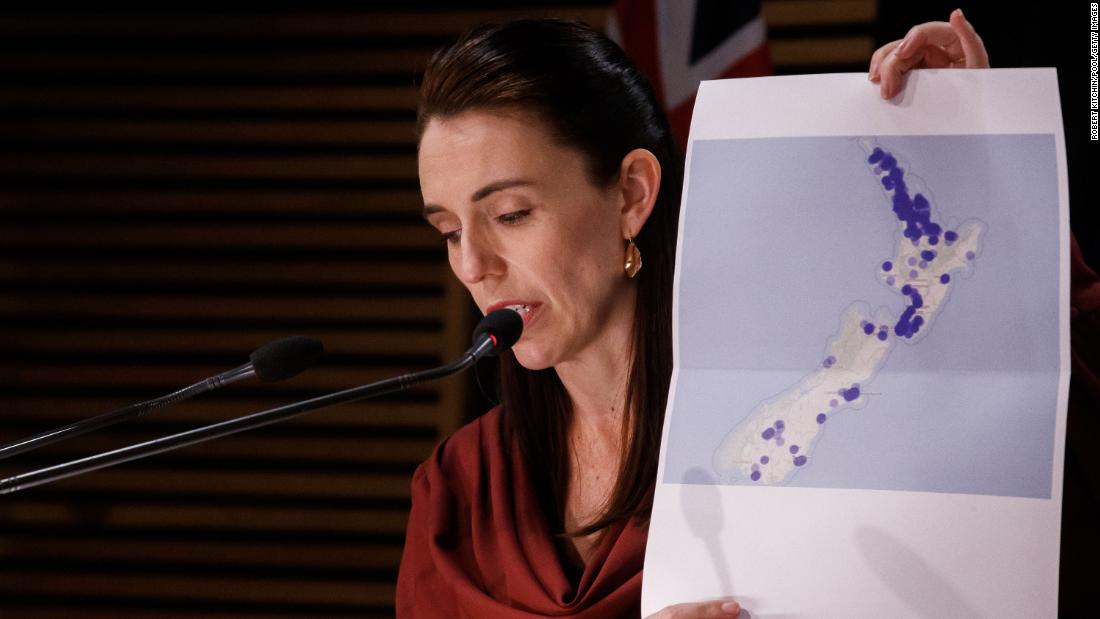 New Zealand, by contrast, is one of the few countries still committed to stamping Covid out.

Hours after confirming the country’s first Delta case in the community, Prime Minister Jacinda Ardern ordered the entire nation into lockdown, with the backing of a broad consensus across the political spectrum. Ten days later, the outbreak had spread to 347 cases, with one person in intensive care, as of Friday.

“Fortress New Zealand” — with some of the strictest border rules in the world — has been breached.

That’s prompted questions over whether attempting to eradicate community transmission — known as the zero Covid strategy — still makes sense in a world swamped with the highly contagious Delta variant.

For now, Ardern is doubling down on the strategy, even as neighboring Australia edges away from the approach. And for now, it seems the public remain on board — even if it means being a “hermit nation.”

But New Zealand’s own Covid-19 response minister has indicated the approach might not last forever. The big question for New Zealand will be what its new strategy might look like.

No urgency to reconnect

Until Delta arrived, New Zealand’s tough border rules had protected it from the turmoil seen in most other countries.

For most of the pandemic, the country has essentially operated as normal — sports games, music festivals, public gatherings and dining have all gone ahead in much the same way they would have before the pandemic.

But the comparatively low death toll has come at a cost. An estimated 1 million New Zealanders live overseas, with nearly 600,000 in Australia, and many of New Zealand’s 5 million residents likely have at least one friend or relative living overseas.

Some haven’t seen their loved ones in over a year.

In March 2020, New Zealand closed its borders to almost all foreigners, and later required almost all returning visitors to spend two weeks in a managed isolation facility — at their own cost. Spaces are limited to around 4,000 rooms a fortnight, and just over 167,000 people have passed through managed isolation facilities since March 2020.
The fortified borders have also contributed to another major casualty: tourism. Once the country’s largest export industry, overseas visitor arrivals slipped by more than 98% in January 2021 compared with a year before.

Despite that, New Zealand doesn’t seem to be in any rush to reconnect with the world. There’s even an us-versus-them mentality among some social media users who criticize overseas New Zealanders desperate to get home for not returning sooner.

That’s because many still believe the upsides are worth it.

A recent poll by public polling company Stickybeak found 84% of people surveyed supported the decision to move into lockdown last week. A separate Stickybeak poll showed only one in four wanted the travel bubble with Australia — which had allowed for quarantine free travel — to be reopened this year.

Charlotte Guigou, 28, a teacher in the capital Wellington, said going into lockdown was annoying, and it had taken a toll not being able to see her family in France. But she still thought the zero Covid approach was the right one.

“This lockdown was really tough, but before that we were just living life like normal, and it was all good, it was really chill,” she said. “It does seem like the pain of not having the borders open, for what we get in return, for the lifestyle we get in return, is still worth it.”

Anna Robinson, 32, spent much of the pandemic in Europe before moving back to New Zealand in April. Like Guigou, the strict border rules come at the cost of missing out on loved ones’ important moments, such as births and weddings. But she thinks New Zealand’s rules mean that vulnerable people or people with underlying health conditions are not being cast aside.

“Lockdown feels like a very small price to pay for the amount of freedom and safety for the community that will come after,” she said.

A different approach from Australia

New Zealand doesn’t need to look far to know what can happen if Delta takes hold.

Neighboring Australia — once a proponent of the zero Covid strategy — continues to battle a major Delta outbreak, recording another 882 locally transmitted cases in the state of New South Wales alone on Friday. One of Australia’s biggest cities Melbourne has now spent nearly seven of the past 20 months in lockdown, according to Australia Broadcasting Corporation’s calculations.
In the past few weeks, New South Wales’ Premier Gladys Berejiklian has conceded the state will need to learn to live with the virus. Last weekend, Australian Prime Minister Scott Morrison said the country needed to change its focus from cases to hospitalizations — mirroring Singapore’s tone in June when the city state said it would need to learn to live with the virus.
“Under our national plan, when we start hitting the 70% and 80% vaccination targets, we can start claiming back what Covid has been taking away from us. And when we do so, we must not be intimidated by the case numbers that will inevitably increase,” Morrison wrote in an op-ed distributed to local media.
But New Zealand is in a different situation from its neighbor. While New Zealand went into a nationwide lockdown within hours of its first Delta case, New South Wales took 10 days to impose a lockdown across greater Sydney — and even then, the rules were lax.

By then, the contagious variant had taken hold, leaving Australia with little choice but to recalibrate.

“Now they’re struggling to keep it under control,” University of New South Wales epidemiologist Professor Mary-Louise McLaws, an expert in infection prevention, said this week. “I can’t see them getting back to zero … I think it’s too late.”

That’s not the case in New Zealand — yet.

“Certainly with Delta, the idea that you can ratchet up your response to Delta as the outbreak grows, that just simply hasn’t been the case in New South Wales,” he said.

“If you’re able to pull it off, (elimination) was definitely the right approach,” said Hendy. “I don’t think it’s inevitable that we’ll have a Delta outbreak that gets out of control.”

Epidemiologist Michael Baker, who advises the government on its Covid strategy, told national broadcaster Radio New Zealand this week that elimination had been the “optimal strategy up to now by every indicator we can use.”

“(Elimination is) technically possible, it’s being achieved across the region. I’m confident it will be achieved again in New Zealand,” he said.

When to drop zero Covid?

“Covid is a new, different world. We need to get out there and live in it. We can’t stay in the cave, and we can get out of it safely,” he said this week.

“It does mean that all of our existing protections start to look less adequate and less robust,” he said. “As a result of that, we are looking very closely at what more we can do there. But it does raise some very big questions about the long-term future of our plans.”

Neither country is opening up right now — doing so could be deadly.

After struggling to get supply, New Zealand has one of the lowest Covid-19 vaccination rates in the OECD, with just over 20% of the population fully immunized.
Australia — which has had a vaccine rollout beset with problems — isn’t much further ahead, with 25% of the entire population immunized. Government figures put the number of fully vaccinated adults at 33% — and its opening up is contingent on that figure reaching 70% to 80%.

“We’re saying to everybody get vaccinated, get fully vaccinated, you still have time to make sure that when we start opening up, you have those options to live a more freer life,” Berejiklian said.

But while Australia has signaled how it could move away from zero Covid in the next few months, there’s little clarity about when or if New Zealand will do the same.

Across the world, experts have said Covid may be like the flu in future — something that can kill, but something we live with. Hendy has another comparison: once New Zealand has high rates of vaccination — perhaps between 70% and 80% — Covid could be treated like the measles.

“We don’t lock down for measles. But we also don’t tolerate it in the community — we mount a public health response to eliminate measles when we have an outbreak.”

On its website, the Ministry of Health explains that it will use a combination of border rules, vaccinations and public health measures to keep people safe from Covid. The country will still try to stamp out the virus — but it may mean it relies less on lockdowns.

“Our Elimination Strategy has proved its worth and remains an achievable goal even when current border restrictions are eased,” the Ministry of Health says on its website.

In short, New Zealand is not planning to live with Covid in the same way as other countries.

That may offer the potential for life to go on largely as it did before the pandemic — but it means an immediate future mostly closed to the world.

CNN’s Angus Watson contributed to this story from Sydney, Australia.