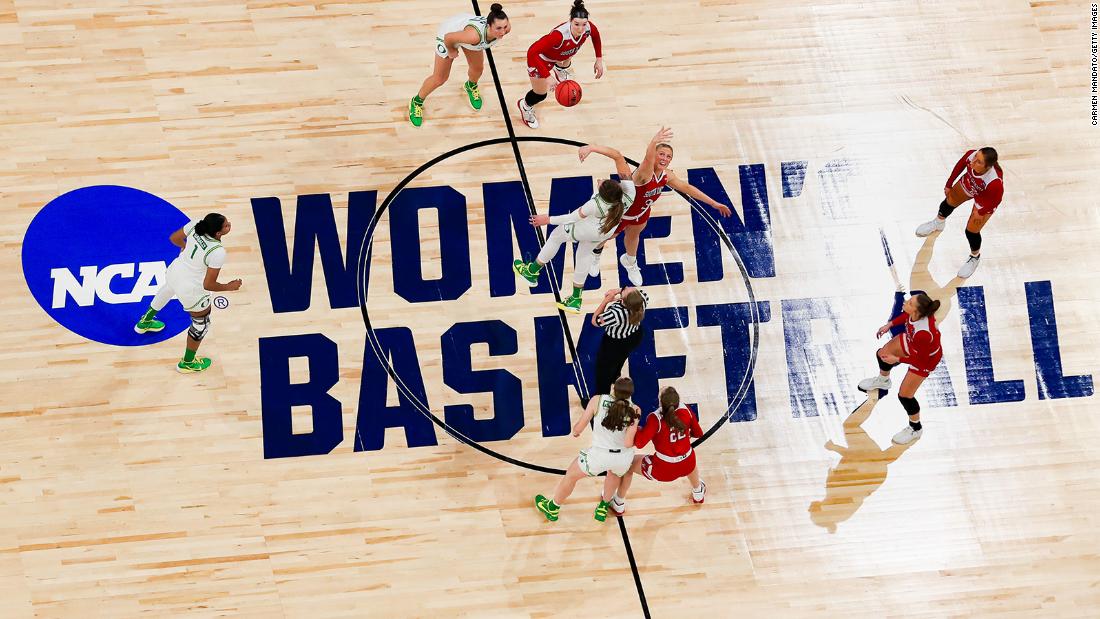 The study said gender inequities in the NCAA stem from the organization’s structure, which is “designed to maximize the value of and support to the Division I Men’s Basketball Championship as the primary source of funding for the NCAA and its membership,” while women’s basketball remains undervalued.

The video showed the men’s setup with a large room filled with benches and other types of weight equipment while the women’s setup had one set of free weights.

The law firm’s report found that was far from an isolated incident at the tournaments. In fact, the NCAA’s spending on the men’s basketball tournament in 2019 was nearly three times what it was for the women’s tournament.
Additionally, a substantial amount of revenue sharing with NCAA Division I schools is based on how well they perform in the men’s basketball tournament, which the organization has long branded as “March Madness.”

“There is no analogous financial reward for participation in or performance at the Division I Women’s Basketball Championship,” the study says. “This sends a very clear and loud message to student-athletes, conferences, and schools about which sports matter and which sports do not.”

Kaplan Hecker & Fink says the broadcasting rights fees, which provide the NCAA with most of its revenue, are out of date considering the rising popularity of women’s sports.

The men’s basketball tournament is currently televised by a joint venture of CBS and Turner Sports, which pays an average of $1.1 billion a year for the rights. (Turner Sports is a division of WarnerMedia, which also owns CNN.)

The law firm hired an independent media expert, who estimated that the annual broadcast rights for women’s basketball will be worth between $81 and $112 million in 2025. By comparison, ESPN pays just $34 million a year for the women’s basketball tournament and 28 other NCAA championships, a package that has not been competitively bid in 20 years.

The ways in which NCAA prioritizes Division I men’s basketball all “create, normalize and perpetuate gender inequities,” the report said, and the organization does not have any systems in place to prevent, identify or address those inequities.

“The results have been cumulative, not only fostering skepticism and distrust about the sincerity of the NCAA’s commitment to gender equity, but also limiting the growth of women’s basketball and perpetuating a mistaken narrative that women’s basketball is destined to be a ‘money loser’ year after year,” it adds.

The law firm offered multiple recommendations to help address inequities, including saying that by 2023, the women’s basketball championship be held jointly with the men’s tournament as a combined March Madness event in a single city, bringing a higher profile to the women players.

“We strive for March Madness. To have no affiliation with it is a bummer,” one student-athlete was quoted as saying in the report.

The firm also suggested giving advertisers more opportunities to associate themselves with women’s sports. Currently, any company that wants to advertise in the women’s tournament must also sign up for corporate partnerships that include the more-expensive men’s tournament.

The report recommended conducting “an external gender equity assessment” of the men’s and women’s basketball championships in five years to ensure that “gender equity is being achieved.”

In a statement following the report’s release, the NCAA Board of Governors said it is “wholly committed to an equitable experience among its championships.”

The board said it has directed the NCAA to “act urgently” to address organizational issues and begin work this week to “outline next steps, develop recommendations and effectuate change.”

“We will continue to review and process the recommendations in the gender equity report as we move forward to strengthen championships for all student-athletes,” the statement said.