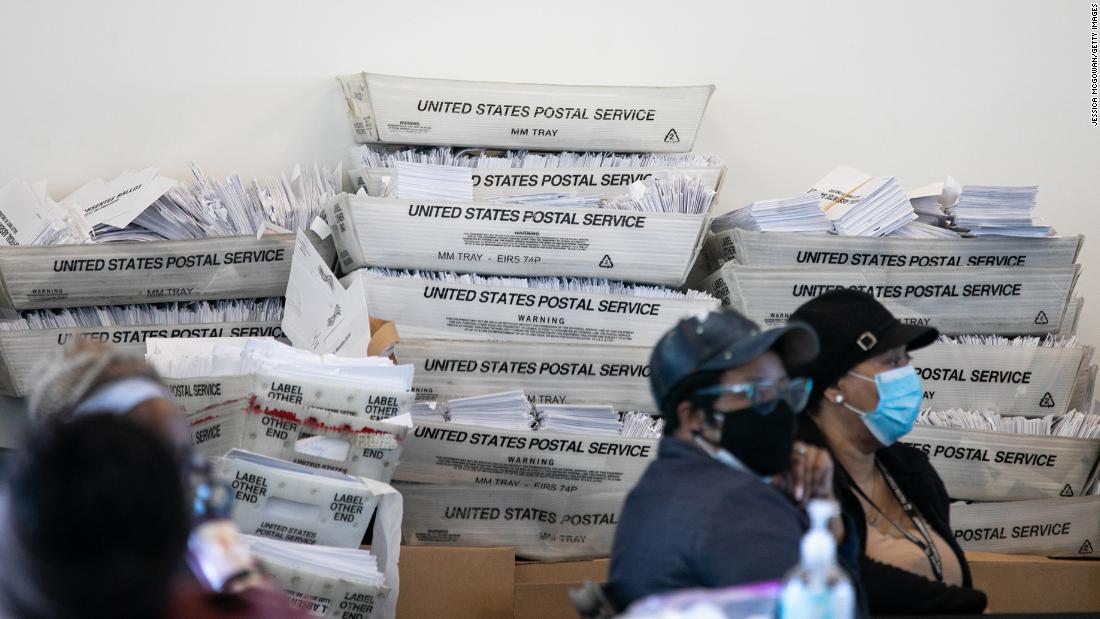 The group will help election officials with a range of issues — from protecting themselves and their families against threats to navigating partisan subpoenas and a raft of new state laws that impose criminal and civil penalties on election officials who fail to comply with their provisions.

The network will be managed by an existing non-profit group, the nonpartisan Center for Election Innovation & Research.

“We see now, still to this day, death threats and other threats being targeted at the professional election officials at the state and local level, and even their families now, even though we are almost a year past the election,” David Becker, the center’s director, told reporters Wednesday.

Ginsberg said the new network will send a message to election officials: “No. 1, you are not alone, and No. 2, we have your backs.”

During a virtual news conference, Brian Corley, a Republican who runs elections in Pasco County, Florida, said he and his staff had been threatened repeatedly last year after his office encouraged residents to consider voting by mail during the coronavirus pandemic.

Corley said the problems only escalated after he spoke up publicly against the threats last December — with angry protesters showing up at his former home, where his former wife and child still lived. He said he ended up seeking help from local law enforcement and the FBI.

Election watchers have expressed alarm for months about the threats that officials face and the potential for a mass exodus from the field. Nearly 1 in 3 local election officials included in a recent survey for the liberal-leaning Brennan Center for Justice say they feel unsafe because of their jobs. The problem is so serious that the US Justice Department earlier this year announced a task force to address the rise in threats against election officials.

Fulton County, Georgia, Elections Director Richard Barron said Wednesday on CNN that the continuous threats lodged against members of his staff and him had prompted a meeting with the FBI. He detailed some of the threats during an interview on “Erin Burnett OutFront.”

“A lot of the calls dealt with motorcycle gangs on their way to our offices, to shoot us all in our offices and seats. A couple members of my staff were visited at home by people at night at their doorway,” he said. “Another lady had her grandma visited because they thought she was there. They wanted to make a citizen’s arrest and tried to push their way into her grandmother’s house.”

Officials say they also worry about penalties in new election laws passed this year in Republican-controlled states. A new Florida law imposes a fine of up to $25,000 on election officials who leave ballot drop boxes unsupervised. And a Texas law signed this week by Republican Gov. Greg Abbott establishes criminal and civil penalties for election workers who run afoul of its provisions.
The Texas law, for example, grants new access and powers to partisan poll watchers and makes it a crime to knowingly obstruct a poll watcher’s view.

“We just passed another law that’s going to make things more contentious in the polling place,” Michael Winn, who served as elections director in Harris County, Texas, said of the new poll-watching provisions.

Winn and Corley are part of a bipartisan advisory board for the new network that also includes Georgia Secretary of State Brad Raffensperger, a Republican who rebuffed former President Donald Trump’s entreaty to “find” the votes needed to overturn his 2020 loss in the Peach State.

Becker said the group has just started its effort to recruit lawyers who will provide pro bono help to election officials.

This story has been updated with comments from Fulton County, Georgia, Elections Director Richard Barron.