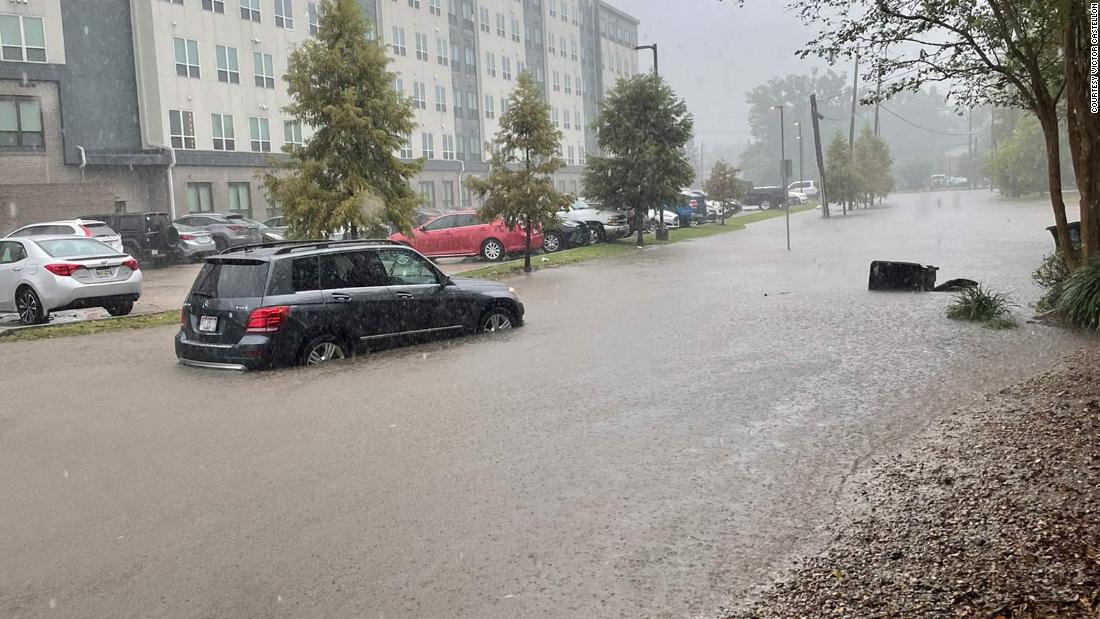 Nicholas initially made landfall as a Category 1 hurricane in southern Texas early Tuesday morning, packing 75 mph winds with higher gusts. The storm also soaked parts of Louisiana, Mississippi, Alabama and the Florida Panhandle as it weakened to a tropical depression.
Located near Marsh Island along the central Louisiana coast and with winds of 25 mph, Nicholas became a post-tropical cyclone Thursday morning, the National Weather Service Weather Prediction Center said.

But even after its downgrade, it still brings the possible risk of flash flooding to roughly five million people in parts of southeast Louisiana, southern Mississippi and Alabama as well as the Florida Panhandle.

An additional 2 to 4 inches of rain may fall in the region through Friday, with some areas at risk of seeing 12 inches, the Weather Prediction Center said. Minor but widespread river flooding is expected, and scattered moderate river flooding is possible.
Flash flood watches are in effect when weather conditions are conducive to flash flooding, but it doesn’t necessarily mean that flash flooding will occur, according to NWS.

Nicholas is expected to move north slowly in the upcoming days, the prediction center said.

“There is a mass of dry air to the north that is moving in from the west, which will help suppress some of the rainfall in northern Louisiana over into portions of northwest Mississippi and west Tennessee,” CNN meteorologist Michael Guy said. “However, central and southern Louisiana could still see rain and storms through Friday, some of which could cause heavy downpours.”

“Considerable flash flooding impacts, especially in urban areas, are possible across these regions,” the NWS said.

Georgia and the Carolinas are also set for heavy rain Thursday.

“Some of this rain will be heavy at times so there is still the flash flood threat,” Guy said.

Nicholas will slowly drift to the north over the next 48 hours into southern Arkansas, where it will dissipate by Saturday morning, Guy said.

The Category 4 storm and the conditions that followed claimed the lives of least 29 people in Louisiana, with the latest fatality announced Tuesday by Gov. John Bel Edwards. Excessive heat is responsible for 13 deaths, while six people died from carbon monoxide poisoning, he said.

Edwards said that only a few of the hundred oil spills that were reported required action.

Louisiana Oil Spill Coordinator’s Office is working with the US Coast Guard, Edwards said during his monthly statewide call-in radio show, and the teams have narrowed the spills down to “a few dozen” issues that necessitate further attention.

“None of which have a spill on par with things that we’ve seen in the past, with big hurricanes like Katrina, for example,” Edwards said.

He noted that one incident involved an abandoned pipeline that became dislodged, which still had some product in it.

“I don’t know that we know yet who the responsible party would have been, but that pipeline has been capped with the opportunity to go back and cap it in a way that we can go back and vacuum it out and get any remaining product out of it,” the governor said. “But all of that went out towards the sea, and I don’t believe that there’s any additional work that has to be done there.”