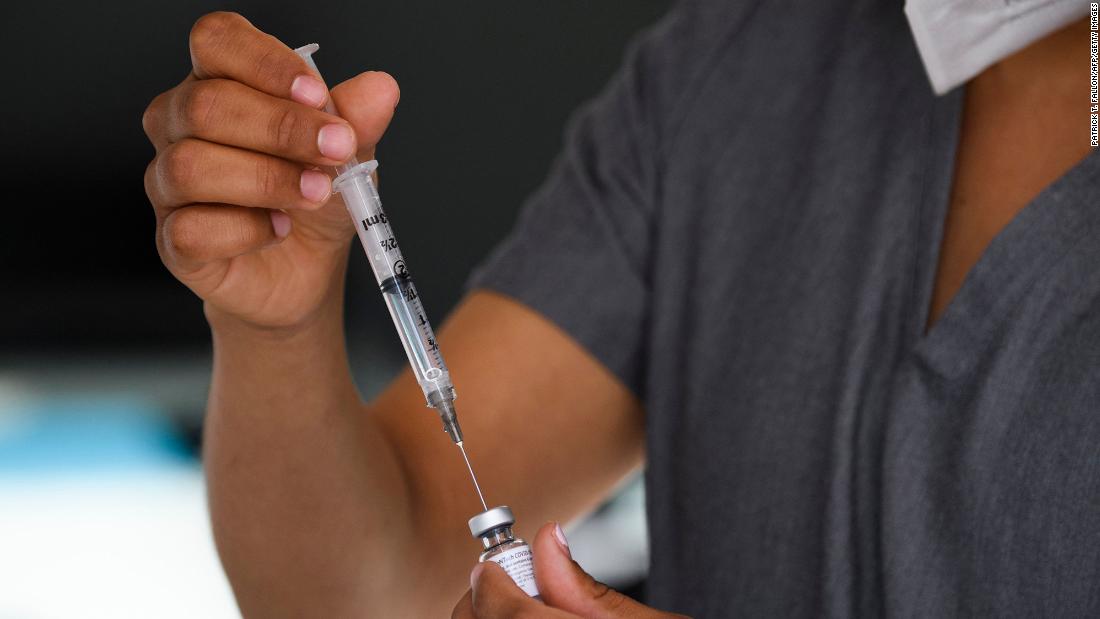 Talks between employers and labor leaders are taking place in a variety of industries. Meat producer Tyson Foods (TSN) said Tuesday that it will require all of its more than 120,000 workers to be vaccinated by November 1. But the mandate is subject to discussions with unions representing around one-third of Tyson’s hourly workers. Meanwhile, Disney (DIS) has said it has started discussing vaccine mandates with the unions representing its workers.
Negotiations aren’t expected to be limited to the private sector. President Joe Biden last week said federal employees needed to show proof of vaccination or face additional testing and mask requirements. “We expect that the particulars of any changes to working conditions, including those related to Covid-19 vaccines and associated protocols, will be properly negotiated with our bargaining units prior to implementation,” said Everett Kelley, president of the American Federation of Government Workers, the largest federal employee union representing 700,000 federal and D.C. government workers.
New York Governor Andrew Cuomo on Tuesday said he was considering mandating vaccines for teachers in the state if Covid-19 cases rise. The New York State United Teachers, which represents 600,000 workers in the state, has pushed back.

“We have advocated since the beginning of the year that any educator who wants a vaccine should have easy access to one. We would support local efforts to encourage more vaccinations,” the union said. “What we have not supported is a vaccine mandate.”

There’s a reason labor leaders have a seat at the table. When a union is a collective bargaining representative for private-sector workers, businesses are prohibited from making unilateral changes to wages, hours or terms and conditions of employment under labor laws governing the private sector. That means employers must negotiate a vaccine requirement with unions representing workers. Implementing such a change as condition of employment would violate the law, said Mark Rothestein, a University of Louisville law professor who specializes in public health and employment law.

Unions aren’t entering each negotiation with the same amount of power. Public sector employees are covered by different labor laws than private sector workers, and there are specific laws in each state covering state and local government employees. That means some states may have power that private businesses do not have to mandate vaccinations for unionized state and local government employees. And the federal government has even broader authority to establish employment conditions for federal employees than states do, Rothestein said.

Around 6% of private sector workers in the United States were union members in 2020, while 35% of public-sector workers were unionized, according to the latest data from the Bureau of Labor Statistics.

While some unions have said they support vaccines to protect workers and curb the virus’s spread, they have so far expressed reluctance to mandate the shots.

Why some unions are pushing back against mandates

One sticking point in negotiations could be that much of the unionized workforce in blue-collar industries aren’t necessarily afforded the paid leave that may be available to corporate employees, both to get the vaccine and to use if they feel ill after receiving it.

Stuart Applebaum, president of the Retail, Wholesale and Department Store Union, which represents 100,000 workers across department stores and food processing industries, said in an email that “employers need to provide adequate paid sick time so that workers aren’t forced to come in when they are ill.” He did not specify how much time he considered to be adequate.

The United Food and Commercial Workers’ Union, which represents 24,000 Tyson employees and hundreds of thousands of workers at grocery chains such as Kroger (KR), Albertsons and Stop & Shop, said it supported and encouraged Covid-19 shots, but expressed concerns with a mandate because the US Food and Drug Administration has not fully approved vaccines, leaving some workers uneasy about getting it. Pfizer, Moderna and Johnson & Johnson’s Covid-19 vaccines were authorized under emergency use conditions, and Biden said he expects full FDA approval as early as later this month.

“It is concerning that [Tyson] is implementing this mandate before the FDA has fully approved the vaccine,” UFCW president Marc Perrone said in a statement Tuesday. “We believe the FDA must provide full approval of the vaccines and help address some of the questions and concerns that workers have.”

Perrone said mandates such as Tyson’s should be negotiated with employees to ensure they have a voice in the policies and that employers must provide workers with paid time off to receive the vaccine and recover from any side effects.

Tyson did not respond to a request for comment on Perrone’s statements.

One health expert expressed concern at the prospect of full FDA approval slowing down the rollout of employer vaccine mandates.

Dr. William Schaffner, a professor at Vanderbilt University School of Medicine and medical director of the National Foundation for Infectious Diseases, said full FDA authorization of the vaccine was a “formality” and should not stop unions or other groups from accepting vaccine mandates, especially as the more contagious Delta variant surges around the country.

“We have so much experience with this vaccine already,” he said. “Why would you withhold the prevention of serious disease from your membership?”

He encouraged more companies and localities to mandate the vaccine to protect public health. “By not mandating vaccines, we are going to have much of this contagious variant spread in our population,” Schaffner said.

In the public sector, American Postal Workers Union, which represents more than 200,000 postal workers, had a different reason for its opposition to a vaccine mandate for federal workers.

“While the APWU leadership continues to encourage postal workers to voluntarily get vaccinated, it is not the role of the federal government to mandate vaccinations for the employees we represent,” the union said.

To be sure, not all negotiations between employers and unions appear poised to hit a snag.

Still, Rothestein, the University of Louisville law professor, said there may be an unsaid reason some unions don’t support vaccine mandates.

“The union needs to represent everybody and they don’t want to antagonize workers who are unhappy about mandates,” he said. “Sometimes unions are oversolicitous of their minority members.”