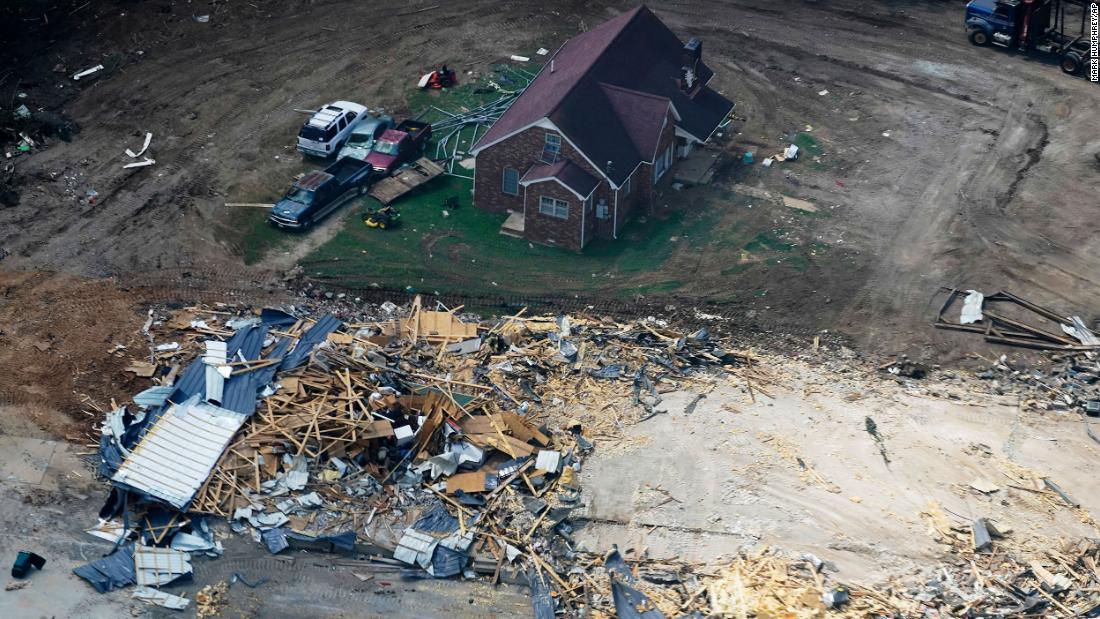 Ida, now a tropical storm, is forecast to move through central Mississippi on Monday afternoon before picking up speed Monday night as it tracks across northeastern Mississippi and into the Tennessee Valley.

“Hurricane Ida’s remnants may reach the west and middle portions of Tennessee on Monday evening through Tuesday with heavy rain and flash flooding possible over the same areas as last weekend’s flood emergency,” the Tennessee Emergency Management Agency warned.

Residents should already be making preparations: weighing the flood risk in their area, creating an evacuation plan and ensuring they have multiple means of receiving weather information, such as the ReadyTN app or a weather radio.

In Waverly, one of the hardest-hit Tennessee cities in the recent flooding, the Humphreys County Emergency Management Agency was simultaneously offering grief counseling and barbecue for those impacted last week, while offering tarps and bottled water to those bracing for the next deluge.

If there’s any silver lining to the storm presently headed toward the heart of Tennessee, it’s that this week’s rainwaters may be more forgiving than the last.

“According to the National Weather Service localized flooding will be possible but is not expected to be the magnitude of last week’s flooding,” Humphreys County Emergency Management Agency spokeswoman Grey Collier said in a news release.

Just four days ago, the agency announced it was suspending search efforts after identifying 20 people killed as a result of water topping the banks of area waterways and inundating the county. Among them were 7-month-old twins swept out of their father’s arms by floodwaters and a 55-year-old woman who livestreamed the flooding on her Facebook page.

“We’re sad that our count is now at 20, but we’re glad that our families now have the closure that they need to move on,” Waverly Police and Fire Chief Grant Gillespie said. “We no longer expect them to find any more victims, but we are still on standby if somebody is reported missing.”

“We were getting rainfall rates of 3 inches per hour for three hours straight,” she said. “It’s an unheard of, astronomical, type of statistic to see after the fact.”

Now, with no time to dry out, the ground remains wet as the storms spinning off Ida’s core threaten to bring 3 to 6 more inches of rain to the Tennessee Valley, Ohio Valley, Central/Southern Appalachians and the Mid-Atlantic.

For Middle Tennessee, which is facing a National Weather Service warning of possible “considerable flash flooding, the rain will continue into Wednesday, forecasters say.

That includes Hickman, Houston and Dickson counties, which were also hammered with high water last week. Like McEwen, Centerville also saw more than 17 inches of rain in one day, and an area outside the city of Dickson registered almost 14 inches.

National Guardsmen equipped with a Blackhawk helicopter an tactical vehicles were activated to assist in rescue efforts. The flooding pulled houses off their foundations and carried away automobiles and other belongings. Almost 300 homes were destroyed. Electricity and cell service were knocked out. Schools were rendered unusable.
Residents described fast-rising waters that left them no time to collect themselves or their belongings. Casey Hipshire likened it to “a tidal wave that just came over the road and into my yard.”

She, her husband and her 8-year-old son escaped the chest-high water rushing into their McEwen home, leaving them with “a lot of heartache,” she said.

“My house fell off the foundation while were still in it, so we had to break the window in the kitchen and crawl out of it and get up on the roof as fast as we could,” Hipshire said.