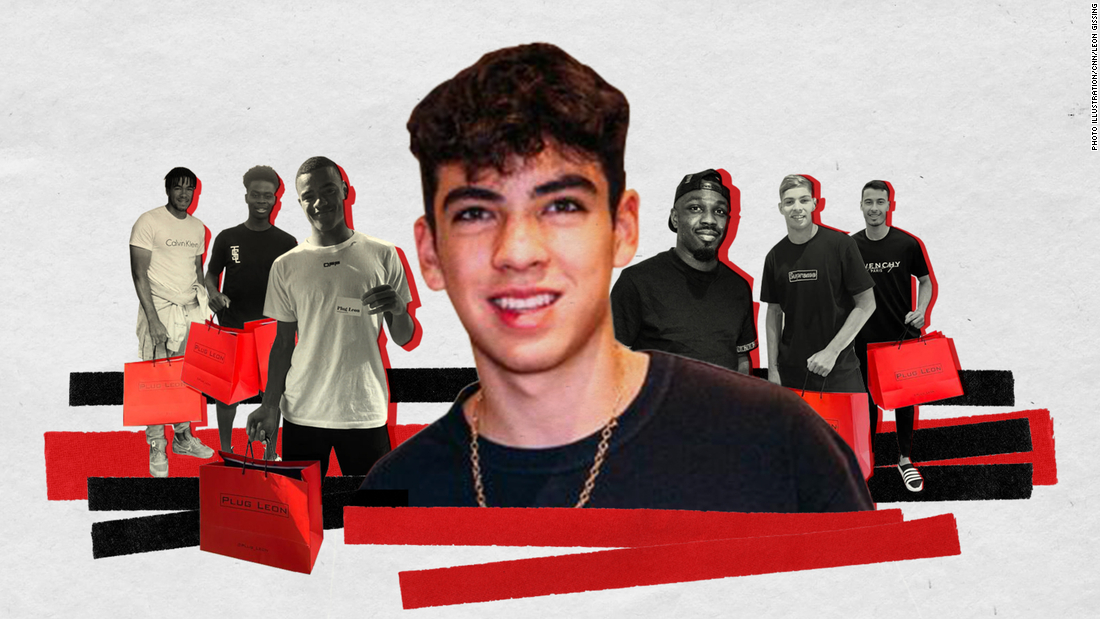 But he wasn’t looking for a selfie or an autograph. Instead, the then 13-year-old was there to give out his business cards.

Now 16, the London-based entrepreneur is a self-confessed sneaker obsessive and decided from an early age that he wanted to combine his two passions: trainers and football.

And he’s made quite a business of his passion.

In the last three years, he has become one of the most foremost suppliers of rare sneakers and clothing to football stars all across Europe, sourcing exclusive items and then selling them on for profit.

While most kids’ biggest concern is perhaps which video game they want to buy, Gissing was busy starting his business.

“I was obsessed,” Gissing tells CNN Sport. “I wanted to have all of the latest shoes and all of the latest designer or Hyped or new models, and it was a case of obviously my parents weren’t going to spoil me and buy me whatever I wanted, so I just needed to get a bit of extra capital, a bit of extra cash to be able to afford my own pairs of shoes.

“I realized I could do that by reselling trainers. So what I started doing was queuing up outside sneaker stores in London and buying shoes and flipping them for £20, £50 pounds on top.

“I’d queue up for hours outside, waiting for Yeezys, Jordans, whatever the new high release would be, and I flip it on eBay and Depop, one of these small interfaces where reseller meets reseller.”

The teenager isn’t the only one making a name for himself by trading on the desire for exclusivity. There are a number of other personal shoppers, including the likes of Sam Morgan and Joe Franklin, whose expertise are employed by high-profile footballers and musicians.

Those hours Gissing spent waiting in line for new releases and making new contacts paid off thanks to a chance encounter with US tennis star Jack Sock at Queen’s Club, which stages a Wimbledon warm-up event in west London.

After asking Sock for a photo, the former world No. 8 noticed that Gissing was sporting a pair of rare shoes. “Nice sneakers, kid,” he told the teenager.

At the time, Gissing hadn’t yet created his official business Instagram page ‘Plug Leon’ — a “plug” is somebody who is able to source rare and exclusive items — so Sock put in his shopping request via Gissing’s personal account.

“He placed the order for I think it was three or four pairs of really rare off-white Nike trainers,” he says. “I went to his house where he was staying before Wimbledon — he actually won the Wimbledon doubles that year — and I delivered him the shoes.”

Now, Gissing’s business was up and running.

“He was very happy and that’s when I started the ‘Plug Leon’ Instagram because he wanted to shout me out on Instagram,” says the 16-year-old.

‘Some sort of joke’

Despite handing out numerous business cards to different players, the football industry initially proved a tougher nut to crack.

In the end, “the spark that lit the fire,” as Gissing describes it, was a post on Snapchat from another of his clients which caught the eye of Arsenal player Reiss Nelson, who was on loan at Bundesliga club Hoffenheim at the time.

“He added me on Snapchat and I thought it was some sort of joke,” Gissing laughs. “I was like: ‘Okay, it’s a fake account that’s added me. What the hell?’ Reiss Nelson, a super good, young player, there’s no way.

“I send him a message regardless — you’ve got to try — and I said: ‘Look, if you’re ever in London and you need a couple of pairs of trainers or some some new clothes, hit me up and I can sort you out. At this point, I’m kind of thinking: ‘Okay, maybe it is Reiss Nelson.'”

Around two months later, Nelson was back in London and wanted two pairs of rare trainers delivered on his return.

Gissing sourced the sneakers and was waiting with them at Nelson’s house on his arrival from the airport.

“He was very happy and that was essentially what I needed to kick start the business and to really get things going, in the football world at least, because from Reiss, I got Joe [Willock], Bukayo [Saka] and Emile [Smith Rowe],” Gissing explains.

“All of these young kids at a time who are playing academy, fringe first team, potentially getting on in cup games or getting sent on loan, to now being the superstars that they are today.

“So through word of mouth from Reiss, essentially, I started to develop a client base in the football world and then one thing led to another and things really snowballed from there.”

The entrepreneur now counts the likes of Chelsea’s Reece James, Manchester United’s Mason Greenwood — who Gissing says might be the biggest “sneakerhead” of the lot — and Arsenal striker Gabriel Martinelli among his clients in the UK, as well as stars like Barcelona forward Ansu Fati, Juventus midfielder Weston McKennie and Paris Saint-Germain defender Thilo Kehrer across Europe.

While growing his business, Gissing also had to balance his school studies.

Completing an education was always something he has been determined to do well, and earlier this month, he found out he’d passed his GCSEs with flying colors.

“I’m ensuring that I spend adequate time on school and also focus on my business and keep it growing,” he says.

“It’s obviously slightly difficult, but having the employees helps and, you know, I’ve learned to be able to multitask and manage the two things and keep the two things going and putting maximum effort into both.”