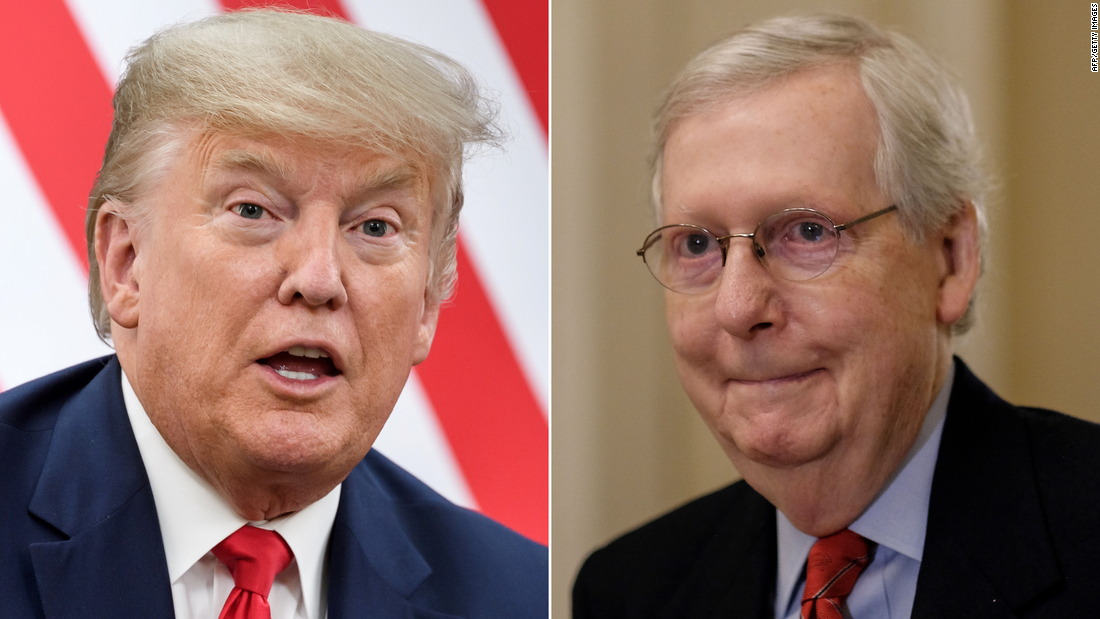 But with control of the Senate on the line, McConnell is very carefully choosing his battles with Trump — still the head of the party and clearly its most dominant voice.

Walker’s ascendance shows the limits of McConnell’s ability to shape the party’s crop of nominees long before Republicans vote in primaries.

“There’s an old saying in politics: Sometimes you’ve got to be for what’s going to happen,” said Scott Jennings, an adviser to McConnell and CNN contributor.

Beyond Georgia, this war for influence in the GOP’s nominating contests has settled into a temporary détente.

Unlike in the House, where Trump is backing primary challengers to several of the Republicans who voted to impeach him in January, the former president has endorsed nearly every incumbent Republican senator running for reelection. His only GOP Senate target is Alaska’s Lisa Murkowski, who voted to convict Trump and who is facing the Trump-backed Kelly Tshibaka in the state’s blanket nonpartisan primary.

McConnell’s political team has greeted other Trump endorsements in open primaries with cautious accommodation — including Sean Parnell in Pennsylvania, Mo Brooks in Alabama, and Ted Budd in North Carolina. None could be described as McConnell’s ideal candidates, said one Republican consultant, but none would significantly diminish the GOP’s chances of winning next November.

And in the case of Nevada’s Adam Laxalt, Trump has thrown his support behind a candidate McConnell worked to recruit himself.

“Except, arguably, in Georgia, Trump hasn’t picked anybody who can’t win, and there aren’t any competitive races where an establishment alternative would be a slam dunk,” said Liam Donovan, a Republican strategist. “You don’t wade into a primary proxy battle against Trump for sport — there has to be something to gain.”

But establishment Republicans still fear there are other Senate primaries — in Arizona, Ohio and Missouri, for instance — where Trump’s influence could hinder the GOP nominee and endanger McConnell’s goal of taking back the majority.

“The types of folks Trump endorses don’t tend to be winners in a general election,” said one Republican fundraiser, pointing to the Georgia Senate race as a prime example.

A cold relationship since December

Both House Minority Leader Kevin McCarthy and Sen. Rick Scott, the National Republican Senatorial Committee chairman, have maintained working and even friendly relationships with Trump. Since he left office, McCarthy and Scott have made treks to Mar-a-Lago and have embraced Trump as an integral part of their midterm strategies.

But despite the accommodations McConnell is making to Trump, relations between the two top national Republicans remain frosty.

According to people close to both men, McConnell and Trump have not spoken since December 15, when the then-President was focused on changing the outcome of the 2020 election.

McConnell by then had long moved on, turning his attention to the Georgia runoff election that would determine control of the Senate. Republicans ultimately lost those Senate races, something Republicans in Georgia attribute in part to Trump’s false claims that the 2020 election was stolen.

Just a day after the runoffs, the mob of Trump supporters stormed the US Capitol to try to prevent the counting of electoral votes. McConnell condemned the insurrection and Trump for his role in fomenting it — though he ended up voting against convicting Trump at his second impeachment trial in the Senate.

“Former President Trump’s actions that preceded the riot were a disgraceful, disgraceful dereliction of duty,” said McConnell in remarks following Trump’s acquittal in February. “Trump is practically and morally responsible for provoking the events of the day.”

Since then, Trump has been relentless. So far this year, he has insulted the Kentucky senator as an “old crow,” a “dour, sullen and unsmiling political hack” and “the most overrated man in politics.”

In an April interview with Fox Business host Maria Bartiromo, Trump called on Senate Republicans to replace McConnell with a new leader.

McConnell, in typical fashion, has taken the mockery in stride.

In his limited remarks on Trump and the primaries, McConnell has reiterated that his priority is victory.

“Well, he has his own agenda,” McConnell said when asked on Fox News in June if he welcomed Trump’s involvement in picking GOP nominees. “And my view is, we’re going to focus on this administration and the future, what they’re trying to do to the country and make it a referendum in the fall of ’22 on how people feel about this new government they narrowly elected while they continue the 50-50 Senate and a close score over in the House.”

The icy feelings between Trump and McConnell also stem from their polar opposite approaches to politics.

“(For McConnell), there really is no emotional attachment to people, there’s no, you know, ego, you know it’s not visceral for him. It is a raw question of strategy and tactics and how do we get from where we are today to having an outright majority,” said Jennings. “I think for President Trump, it’s obviously different. You know, there’s ego, there’s emotion, there’s visceral reaction to people and, and he just doesn’t look at the world the same.”

While McConnell is deliberate and calculating, Trump is impulsive. His recent endorsement of Parnell in Pennsylvania stunned Republicans there and was seen as a snub to another Senate candidate: Carla Sands, a major Trump fundraiser who also served as his ambassador to Denmark.

And his announcement at the North Carolina GOP convention in June that he was backing Budd caught much of the crowd, which was full of supporters of two other candidates (Pat McCrory and Mark Walker), off guard.

That clash of styles remains evident in Georgia, where Trump promoted Walker months before Walker declared his candidacy to challenge Raphael Warnock, the Democratic incumbent who won in one of January’s two runoff elections in Georgia.

“He would be unstoppable, just like he was when he played for the Georgia Bulldogs, and in the NFL,” Trump said in a March statement. “He is also a GREAT person. Run, Herschel, run!”

Their friendship dates back to the mid-1980s, when Trump bought the New Jersey Generals, a United States Football League team on which Walker was the star running back. The USFL would fold shortly after a Trump-led effort to merge the league with the well-established National Football League.

After signing with the NFL’s Dallas Cowboys, Walker remained close with Trump. He appeared on NBC’s “The Celebrity Apprentice” and later supported Trump’s 2016 and 2020 presidential bids. And in December, Walker tweeted a video supporting Trump’s effort to overturn his loss and subvert the will of the electorate. Trump responded, “Herschel is speaking the truth!”

But where Trump sees a loyal friend and supporter, McConnell and plenty of other Republicans see a major liability.

The Senate minority leader tried to recruit the two GOP senators who lost the January runoffs, David Perdue and Kelly Loeffler, to run in the primary. And his allies sent a clear message in the press that McConnell viewed Walker as a dangerous gamble for Republicans.

But even after a string of negative stories about the former football star, including accusations he threatened and abused women, Walker got in the race in late August. Days later, Trump endorsed him. As a result, McConnell is having to recalibrate his strategy to take back a crucial seat in his quest for a majority.

Republican strategists say there’s still a possibility McConnell could champion an alternative in the Georgia primary. Most likely that would be Latham Saddler, a young former Navy SEAL who surprised plenty of Peach State Republicans when he reported raising more than $1.4 million in his first several weeks as a candidate.

But Republicans in Washington acknowledge the options for McConnell in Georgia have narrowed considerably. If Trump-endorsed candidates drag down the party’s chances, the Republican leader has already said he’s preparing to pull them back up.

“There’s no question that in order to win, you have to, in most states that are going to determine who’s in the majority next time, you have to appeal to a general election audience. And some of the candidates who filed in these primaries clearly aren’t. I’ll be keeping an eye on that,” McConnell told conservative radio talk show host Hugh Hewitt in June. “Hopefully, we won’t have to intervene. But if we do, we will.”