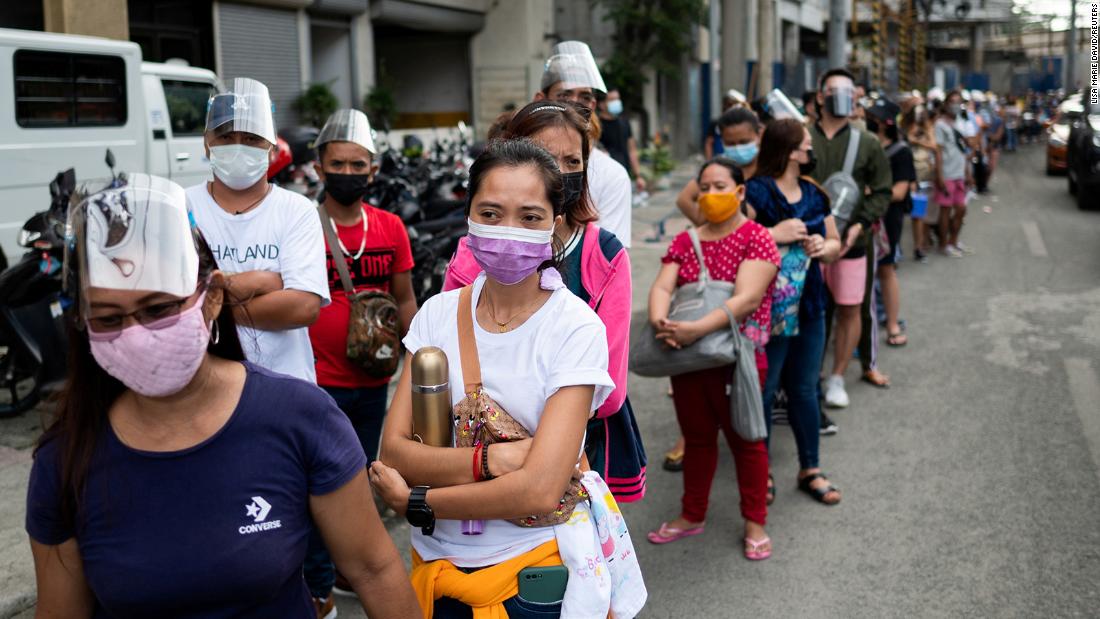 Restrictions will be imposed across greater Manila, an urban sprawl of 16 cities that is home to 13 million people. The nearby province of Laguna, and the cities of Iloilo and Cagayan de Oro, will also be placed under lockdown.

The lockdown, which is expected to cost the economy $4 billion, will mean people cannot leave their homes, except for essential shopping, while indoor and al fresco dining is banned.

Coronavirus cases have been rising in the Philippines since July, driven by the highly infectious Delta variant that the US Centers for Disease Control and Prevention warned could spread as easily as chickenpox. The Delta strain has caused similar severe outbreaks across Southeast Asia, especially among countries with low vaccination rates.

So far, the Philippines has fully vaccinated about 9.51% of its 108 million population, according to data from Johns Hopkins University.

But thousands clamored for a shot on Thursday — in large part due to confusion over mixed messaging from authorities.

Philippine President Rodrigo Duterte said in a July 28 news conference that if unvaccinated people left their house, they would be escorted back by police. But the next day, the presidential palace clarified this would not be enforced.

A spokesperson from the Philippine National Police also told CNN on Friday that the force was never instructed to apprehend unvaccinated people outside their homes.

In June, Duterte threatened to jail people who refuse to be vaccinated — contradicting his own health officials, who have said that while people are urged to receive the vaccine, it was voluntary.

Adding to the confusion were false rumors claiming that people’s vaccination status would affect their employment or ability to receive financial aid.

The Department of Health refuted these rumors on Thursday, urging the public not to believe in “fake news,” according to the official Philippine News Agency (PNA). The department also reassured people that vaccinations will continue even under the hard lockdown in Metro Manila, the PNA reported.

On Thursday, the Philippines reported 8,127 new infections and 196 new deaths, bringing the country’s total to more than 1.6 million cases and 28,000 fatalities since the pandemic began, according to the Department of Health. Only Indonesia has reported a worse outbreak in Southeast Asia.