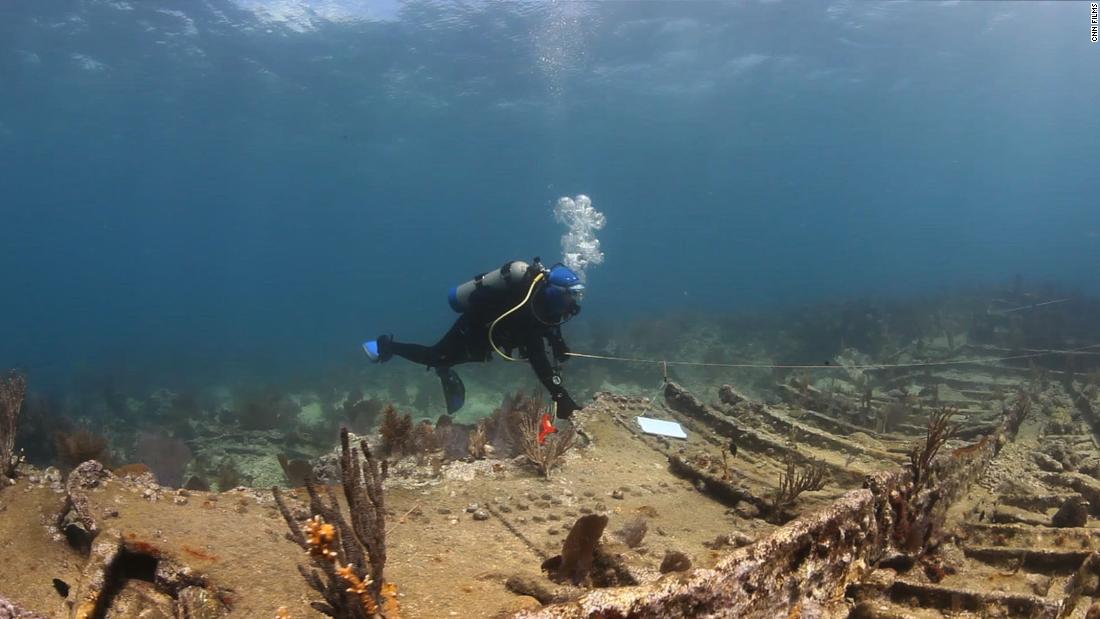 Try to hold on to it, and it slips between your fingers. Pour it into a tall glass, and suddenly the formless liquid has shape. Heat it long enough, and it will eagerly disappear.

Just as fluidly as water can transform, so too can our relationship with it — even when that relationship is steeped in pain.

“The African American relationship to water itself, I think, is such a layered, complex, complicated history,” says Charles Todd, the director of CNN Films’ documentary short, “Lessons from the Water: Diving with a Purpose.”

Yet another part of that complexity, Todd continues, is the healing that can be found in those same waves.

Take, for example, the three Black scuba divers Todd introduces in “Lessons from the Water”: Ayana Flewellen, Riane Tyler and Kramer Wimberley, who all use their skills for diving and maritime archaeology to reclaim Black history buried in the ocean’s depths.

The trio is part of the non-profit Diving with a Purpose, an organization that specializes in the documentation, protection and interpretation of African slave trade shipwrecks. As the film notes, more than 12,000 ships traveled from Africa to the Americas during that era, and it’s estimated that there are 1,000 wrecks still to be identified. The effort isn’t only to restore the vessels to the historical record, but also to honor and give voice to the nearly 2 million kidnapped Africans whose lives were lost on the voyages.
Read more: Diving into the past: The Black divers searching for slave shipwrecks

With Todd’s cameras capturing their deep-sea work, Ayana, Riane and Kramer show what it means to not shrink from the traumatic realities of the trans-Atlantic slave trade but to swim toward a deeper understanding of them, emerging on the other side with an empowered perspective on Black identity.

“For me, going on this journey of hearing Kramer, Ayana and Riane tell their story of diving deeper into the history of my ancestry … became one of the most rewarding aspects that I’ve had as a filmmaker to date,” Todd says. “Diving with a Purpose is a non-profit organization; this is not something where everyone is salaried and making a ton of money. They are doing this because the work needs to be done. And they are sacrificing a lot of their own personal comfort to do it. I think that sacrifice is everything. It’s a lesson in and of itself.”

Below is a lightly edited and condensed interview with Todd on the making of “Lessons from the Water,” which was produced in partnership with the studio Scheme Engine, where Todd is creative director.

CNN: Tell me about the genesis of this project. How did you come to this idea?

In the wake of 2020, we were very interested in telling stories that centered around Black or BIPOC empowerment. We were initially hesitant to do anything revolving around Black trauma because we had a sense that there was so much Black trauma already being presented across the internet, TV (and) various publications.

When (CNN Films Executive Producer) Alex (Hannibal) brought this up to us, it was kind of conflicting, because on one hand, “Diving with a Purpose” is a story that is rooted in the trans-Atlantic slave trade. But I think what resonated was the idea that this would have a reclaiming (effect) for our history.

And what was maybe most interesting for me was that Diving with a Purpose is a group actually doing something to provide answers. Most stories surrounding Black trauma highlight it and then that’s the end of the film. You’re left with feeling loss. I liked what Diving with a Purpose is doing because they’re exploring our history but then actually doing the work to resolve, to heal, and to progress forward from those experiences.

CNN: ‘Lessons from the Water’ is a complex narrative. How did you go about shaping the story?

What I was most interested in from the beginning was the healing component of Diving with a Purpose. It was, “How do you take something from the past and actively transmute fear? How do you actively transmute anger? How do you actively transmute confusion into something that’s actionable and that makes you more whole?” Yes, archaeology is a study of the past, but can you call it a study of the past if these experiences are still ever-present today, whether it’s through PTSD, or through legislation limiting the teachings of critical race theory in classrooms? Then you start to think about archaeology, not as past-exclusive but really as a study of how the past informs the present. And in the work that we’re doing in the present, how will that shape the future?

CNN: The film’s opening montage reflects both the trauma that has come from water for Black Americans, like the fire hoses used on Civil Rights marchers, but also the joy that has been found in a lake baptism or swimming pool. How did you approach balancing that dichotomy throughout the film?

From the beginning, I wanted to show the totality of Black identity; what Black identity looks like with water, and what our relationship is to the water. I didn’t want to tell a story that was solely focused on presenting Black trauma on the screen. So once we opened it up and looked at the idea of Black identity and water, that’s what led to our opening montage — the idea being that yes, there is a stereotype that’s rooted in our fear of the water, but that’s only one relationship that’s been presented.

It was important to see the first female Black Olympian (swimmer to win) a gold medal. It was important to see kids playing with sprinklers. It’s important to see a baptism, especially with the roots of the church within the Black community. Showing the totality of our experience from the beginning signals that this is not going to be a truncated story of just “fear in water,” because our history is not one-note.

CNN: One quote from the film that really stood out to me was, “the process of locating these vessels comes down to who is in the water.” What stood out to you when you heard Ayana explain it in that way?

So much of maritime archaeology, as it relates to anything surrounding sunken ships, is rooted in technological advancements. It’s centered around, “Well, how was the ship constructed? How big was the ship? What was the technology they were using to make the ship more stable, more nimble in the water?”

No one’s paying attention to the very humanity of who was on board these ships.

And I think when she says it all comes down to who is in the water, you know, an African American individual — an African diasporic individual — by nature of wanting to understand their lineage (and) their place in this world, is going to have a much more vested interest in telling the human-driven story of the people on board.

CNN: I’m curious if, as a filmmaker and a storyteller, watching their process of relating to the water taught you anything about learning to swim in your own predominantly White industry.

Like, you’re aware of the situation, but you are so focused on your own growth and development and betterment as a person that you use any sort of exclusion from an industry as motivation to work that much harder to make this industry work for you. And when you do that work, it becomes that much more rewarding when you see yourself thriving in the industry. They now provide a blueprint, a pathway forward, for future generations.

So when I think about how that translates to being a Black filmmaker in this day and age, it is not only promoting positive stories of representation for individuals to see the full breadth of the Black experience, (but) providing opportunities for those who were just like me five years, 10 years prior. And that is something that has been a commitment and a focus for me.

CNN: What’s your own journey with water? Are you a diver?

I was not a diver. I’m a fine swimmer (but) I was never on a swim team. I never thought of myself as someone being interested in pursuing diving recreationally. I think what I’m most excited about now having come full circle as this project is released is to now begin my own journey in the water; it’s my intent to become a certified diver.

CNN: Where did you grow up? Were you an inland kid?

I was born in St. Louis, and then I moved when I was 11 to Seattle, the Pacific Northwest. And those two locations have a very different relationship to the outdoors, and to water itself.

Summertime in St. Louis is basketball, a St. Louis Cardinals game, hanging with friends at a playground. Summertime in Seattle is wakeboarding, jet skiing, jumping off a bridge down to a lake 20, 30 feet below.

And that was definitely an adjustment for me … those summers spent inner tubing and diving into the lake. I was never someone who wouldn’t do it; I was always someone who would literally just dive in. But that doesn’t mean I wasn’t afraid while I was doing so.

CNN: Do you still retain that fear? The fear of diving in?

You know, in watching the development and getting to know Kramer, Ayana and Riane, fear is something that doesn’t prohibit — or inhibit, or dictate — any movements in my life anymore.

Whether it’s filmmaking, and taking on a job that is far bigger than something that I’ve done before, or whether it’s being out in the middle of the ocean and jumping into the water — when you spot fear, when you feel fear, you learn to embrace it and dive in.

Only by diving in do you learn from it, conquer it, and overcome that fear. And the more you overcome your fears — in your personal life, your professional life, et cetera — the freer you become.

And I enjoy that pursuit of freedom, regardless of whether or not I actually get there.