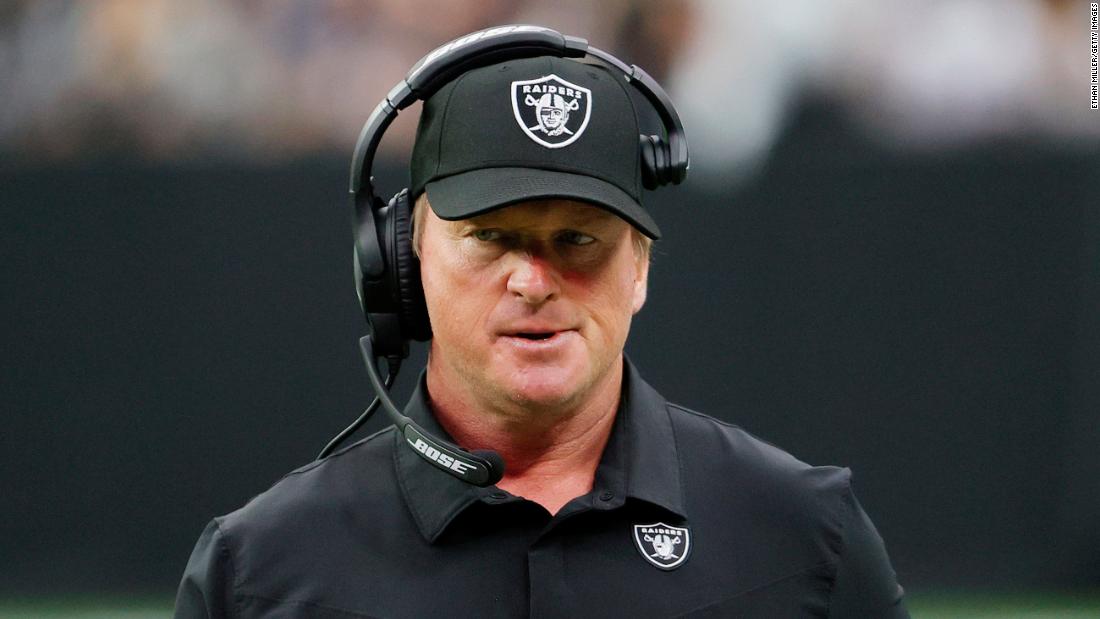 When Jon Gruden was a prominent broadcaster on ESPN, providing color commentary during “Monday Night Football,” he was also sending profane and hateful emails to friends.

Gruden later became the head coach of the Las Vegas Raiders. Now some of his private missives are public; he is out of a job; and his departure was reported during the middle of “Monday Night Football.”
The sequence of events suggests that someone leaked the ugly emails in order to undo Gruden. The first story landed last Friday, via the WSJ’s Andrew Beaton, headlined “Jon Gruden Used Racial Trope to Describe NFLPA Chief DeMaurice Smith in 2011 Email.” Several days later, the scoop is still one of the most popular stories on the Journal’s website, signifying widespread interest in the subject matter.

Beaton explained on Friday that an NFL investigation into “workplace misconduct at the Washington Football Team” had unearthed “more than 650,000 emails” that — in the words of the league — “raised issues beyond the scope of that investigation.” One issue: Gruden’s messages to the Washington team’s then-president.

Friday’s leak was a table-setter of sorts. Then, on Monday evening, the NYT blanketed the table with info about seven years of emails. Gruden “casually and frequently unleashed misogynistic and homophobic language over several years to denigrate people around the game and to mock some of the league’s momentous changes,” Ken Belson and Katie Rosman reported.
The story went up around 8:02pm ET. By 9:01pm, reporters were saying that Gruden planned to resign from the Raiders. Adam Schefter broke into “Monday Night Football” with word that the two sides “parted ways.” He cited the NYT’s reporting about Gruden offending “NFL Commissioner Roger Goodell, women, gays, minorities, all sorts of people.”

“I never meant to hurt anyone”

In a statement, Gruden said he loves the Raiders and does not want to be “a distraction.” He added, “I’m sorry, I never meant to hurt anyone.”

Per CNN Sports News Editor Jill Martin, “a league source confirms to CNN the accuracy of the NYT story. The source says that those emails were uncovered by the league and presented to Goodell last week. The league said on Friday that it sent the emails to the Raiders and that it has been waiting for the team to review them with Gruden.” Read CNN’s full story here…

Longtime sports media exec Andrew Brandt commented on Twitter, “The NFL got Gruden out with the leaks; mission accomplished. But the public/fans/media is going to want to know more about these 650,000 emails. Wasn’t this case about the toxic workplace of the Washington Football Club? This feels like this is just the beginning, not the end…”

— Smith had this to say on Monday: “The email from Jon Gruden — and some of the reaction to it — confirms that the fight against racism, racist tropes and intolerance is not over. This is not about an email as much as it is about a pervasive belief by some that people who look like me can be treated as less…” (Twitter)
— ESPN’s story about the matter notes up high that “Gruden was employed by ESPN as the lead analyst for Monday Night Football at the time he sent the emails that are now under review…” (ESPN)
— Don Van Natta Jr. observed: “The only documents from the NFL’s inquiry of a toxic workplace inside the Washington Football Team are the offensive Jon Gruden emails, leaked days after being found. No report, no findings, no emails were released/leaked by the NFL about its inquiry of Dan Snyder and the WFT…” (Twitter)
— Far-right commentators immediately framed Gruden as a victim of wokeness and cancel culture… (Twitter)