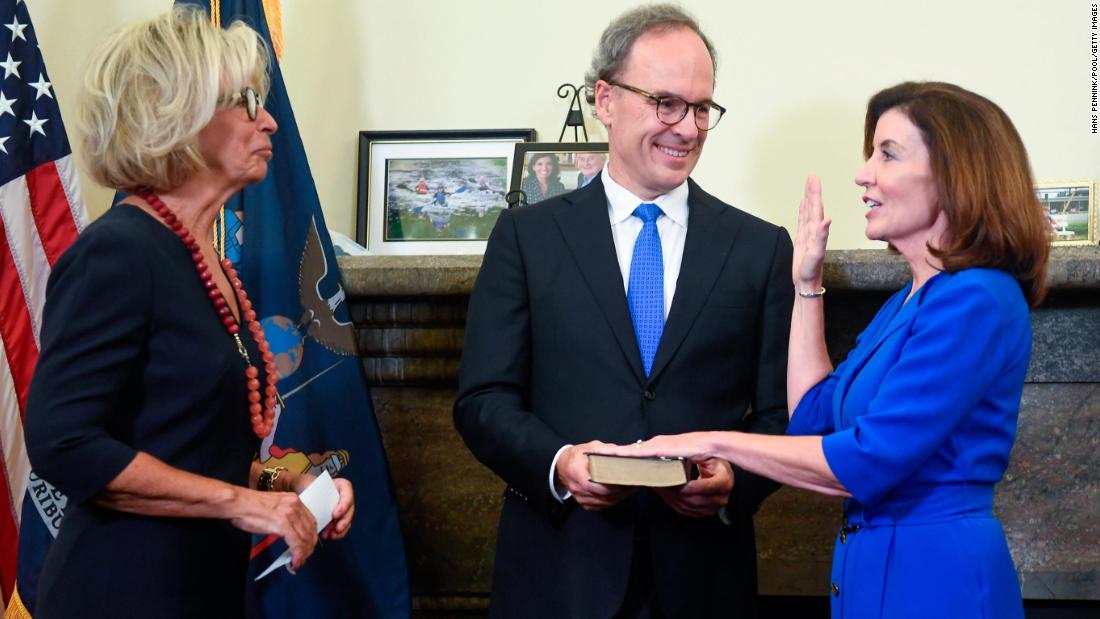 In her first speech to New Yorkers since being sworn in as the state’s 57th governor — and the first woman to hold its highest office — Hochul said she would lead a “dramatic change in culture, with accountability and no tolerance for individuals who cross the line.”

Though she made no mention of her predecessor — who resigned following the release of a damning report from state Attorney General Letitia James — the list of priorities Hochul ticked off in her remarks read as a clear rebuke of his administration’s recent management of the pandemic and caustic relationship with legislators. The new governor also pledged to address a series of issues that seemed to take a backseat to Cuomo’s ultimately losing battle for his political life. Hochul said she was “not at all satisfied” at the sluggish rate the state has been dispersing its federal Covid-19 relief funds, including aid for renters, and indicated she planned to hire more staff to break the bureaucratic gridlock.

Anyone who applies for and qualifies for the aid, Hochul pledged, “will be protected from eviction for a solid year.” She also said the release of funds set aside in the state budget for “excluded workers,” or those who were not made eligible for federal relief by Congress, would be expedited — a pleasing note for progressive lawmakers who fought to include the provision during negotiations earlier this year.

Over the past two weeks, after Cuomo announced he would resign, Hochul has begun to build out a governing team. On Monday, hours before her official ascent, she announced that Karen Persichilli Keogh, a former aide to Hillary Clinton, would be named the new secretary to the governor — one the state’s most powerful appointed positions — and that Elizabeth Fine, the top legal officer of New York’s top economic development agency, would become her chief counsel.

But Hochul’s most pressing political decision remains in front of her. In the coming days, an adviser told CNN, she will tap her replacement as lieutenant governor. That partner, Hochul has indicated, will come from New York City, where she is working overtime to build out a base of support and introduce herself to voters.

Hochul said her most immediate policy goal was to return children safely to school and that she would, this week, release a “series of school-related policies” that will be “concise and consistent.” Hochul also indicated that a statewide Covid-19 vaccine mandate for educators might come under consideration.

“We need to require vaccinations for all school personnel, with an option to test out weekly — at least for now,” she said.

In the meantime, Hochul announced plans to direct her health department to issue a mandate for universal masking in schools across the state and, citing a recent conversation with Dr. Anthony Fauci, said her administration would also act quickly to ramp up its efforts to provide Covid-19 vaccine boosters.

“We discussed the urgent need to ensure vaccinated individuals receive a booster dose at eight months,” Hochul said. “I’m prepared to do whatever is necessary, including reopening mass vax sites so a booster is available to all new Yorkers who meet that timetable.”

The 62-year-old, who spent seven years as Cuomo’s deputy, also said that she would pursue more comprehensive standards of behavior for state workers.

“Today, I’m directing an overhaul of state government policies on sexual harassment and ethics, starting with requiring that all training be done live, instead of allowing people to click their way through a class,” Hochul said.

One of Cuomo’s accusers, former aide Charlotte Bennett, alleged in March that the former governor, in 2019, had another senior aide complete his online training for him. Cuomo denied any suggestion that he did not personally fulfill the process.

Hochul, who will be up for election and likely face a primary challenge next year, also offered a more personal message to voters.

“To those new Yorkers who have yet to meet me, I say this: You may not know me, but I know you,” said Hochul, who has traveled the state regularly but is still a mostly unknown quantity in New York City, where she will likely need to outperform her 2018 showing in the lieutenant governor’s primary in order to win a first full term as chief executive in 2022.

She also invoked the words of Theodore Roosevelt, who served as governor of New York before becoming vice president and then president of the United States, and his tribute to the “man in the arena” — though, as Hochul noted, “Today, for the first time in New York history, a woman will enter that arena as governor.”

“You’ll find me to be direct, straight-talking and decisive,” she said. “I will not be deterred, and I am willing to be bloodied and marred in the pursuit of doing what’s right for the people of this great state.”