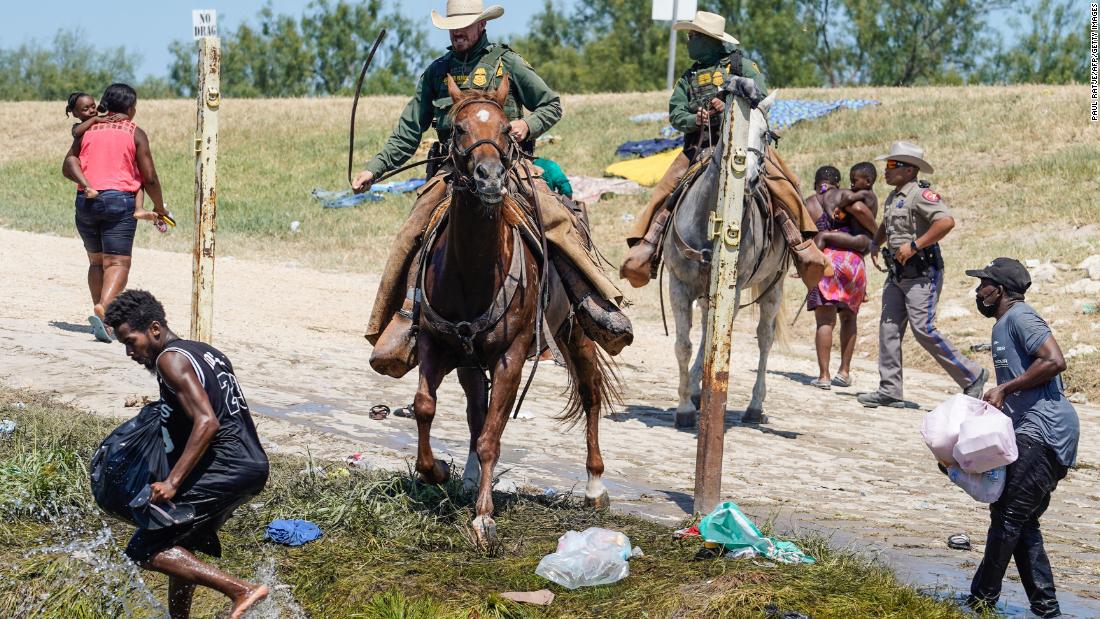 Videos taken by Al Jazeera and Reuters appear to show law enforcement officers on horseback using aggressive tactics when confronting migrants, who are largely Haitian, to prevent them from crossing into the US.

“The Vice President raised her grave concerns about the mistreatment of Haitian migrants by border patrol agents on horses, and the need of all (Customs and Border Protection) agents to treat people with dignity, humanely and consistent with our laws and our values,” Harris’ chief spokesperson Symone Sanders said in a statement.

Harris’ chief of staff Tina Flournoy was among the administration officials who met with the Congressional Black Caucus about the border on Wednesday as a part of that engagement from Harris.

A law enforcement officer on horseback is seen in the Al Jazeera video swirling long reins near a group of migrants. Shortly beforehand, another individual on horseback is heard yelling at the migrants, saying, “You use your women? This is why your country’s sh*t, because you use your women for this.” Although the profanity is redacted in the video report, Al Jazeera English reporter John Holman published the full quote — he attributed it to an unnamed Border Patrol agent — on his Twitter.

Sanders added that Mayorkas shared the concern and would update her on the continuing investigation.

“Secretary Mayorkas also spoke with the Vice President about the efforts DHS has underway to address the humanitarian needs of people at our border in Del Rio through the provision of food, shelter, clothing, and medical care, as well as engagement with non-governmental and international organizations,” Sanders wrote.

Harris on Tuesday called the images “horrible” and said she supports an investigation into the matter.

“What I saw depicted about those individuals on horseback, treating human beings the way they were, is horrible. And I fully support what is happening right now, which is a thorough investigation into exactly what is going on there,” Harris said in response to a question from a reporter.

The migrants are located at a temporary site under the Del Rio International Bridge in Texas as they wait to be processed by US immigration authorities. They sleep in the dirt, surrounded by growing piles of garbage, exposed to the elements and without much food and water, in hopes of being processed by the overwhelmed US Border Patrol.

Earlier Tuesday, Mayorkas said he was “horrified” by the situation.

“I was horrified by what I saw,” Mayorkas told CNN’s Brianna Keilar on “New Day.” “I’m going to let the investigation run its course. But the pictures that I observed troubled me profoundly. That defies all of the values that we seek to instill in our people.”

CNN’s Chandelis Duster and Maegan Vazquez contributed to this report.