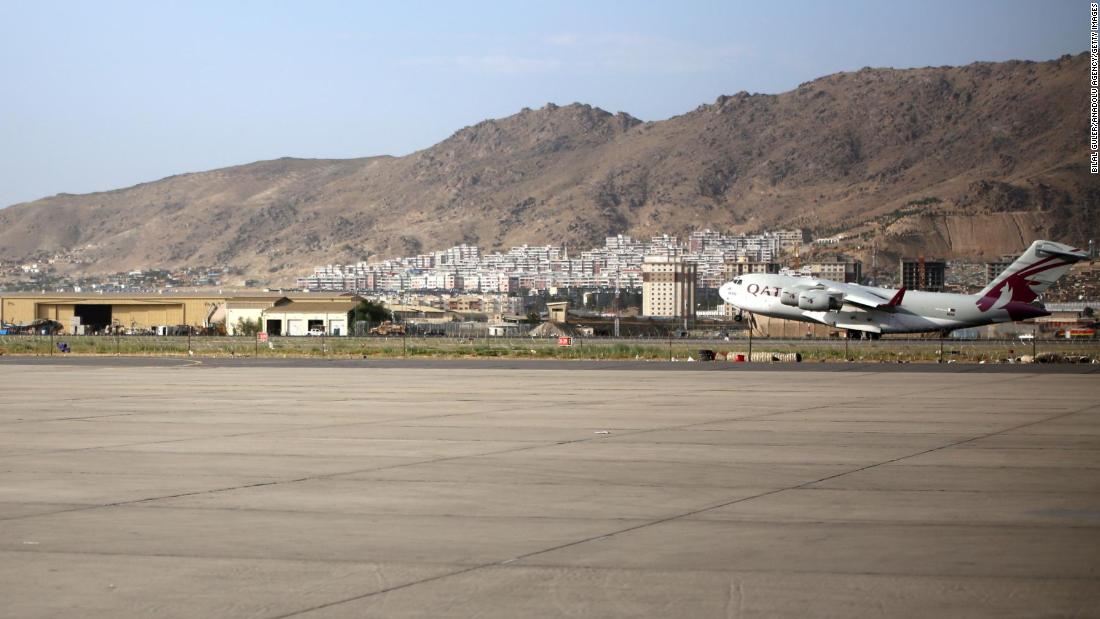 Two domestic flights flew from the capital’s airport to the cities of Mazar-i-Sharif and Kandahar, bin Mubarak Al-Khayarin Al-Hajar confirmed.

A team of Qatari technicians are carrying out repairs at the airport, which could start receiving flights in the coming days, the statement added.

Qatar’s Special Envoy of the Minister of Foreign Affairs for Counterterrorism and Mediation in Conflict Resolution, Mutlaq bin Majed Al Qahtani landed in Kabul Friday. Qatari officials in Kabul are engaging in talks with the Taliban on transitioning to a government and the reopening of Kabul airport.

The Gulf state’s goal is to help establish a political settlement for lasting peace in Afghanistan ensuring security, stability and development in the country, a Qatari source with knowledge of the situation told CNN Friday.

There are three parties engaged in discussions to resume operations at Kabul airport, the source said.

Qatar is also working closely with the international community, particularly those embassies relocated to Doha from Kabul, including the US, the UK, the Netherlands, and Japan, to provide safe corridors and freedom of movement for those in Afghanistan and continue cooperation in the fight against terrorism to prevent any future instability in the region, the source added.

Meanwhile, clashes have continued in several parts of the Panjshir Valley in northern Afghanistan, the last province holding out against the Islamist takeover. Fighters of the National Resistance Front (NRF), a multi-ethnic group that includes former Afghan security force members and reportedly numbers in the thousands, have been battling a Taliban offensive for the past two weeks.

Panjshir Valley, a mountainous, inaccessible region north of Kabul, has a long history of resisting the insurgent group. In the late 1990s, it was a center of resistance against the Taliban during their rule.

A Taliban spokesman told CNN Saturday that its forces had made “considerable advances” and taken four districts of the mountainous province. The Taliban have attacked Panjshir from several directions and appear to be targeting the provincial capital, Bazarak.

An international NGO working in the area, Emergency International, said in a post on Twitter that Taliban fighters had reached the village of Anabah, which is located a few kilometers from Bazarak, on Friday night.

“During the night of Friday 3 September, Taliban forces pushed further into the Panjshir Valley, reaching the village of Anabah where EMERGENCY’s Surgical Centre and Maternity Centre are located. There has so far been no interference with EMERGENCY’s activities. We have received a small number of wounded people at the Anabah Surgical Centre,” the tweet read.

In a video message Friday, the former Vice President of Afghanistan, Amrullah Saleh, said there had been casualties on both sides. Saleh fled to Panjshir when the previous government fell in August.

“There is no doubt we are in a difficult situation. We are under invasion by the Taliban,” he said, before adding: “We will not surrender, we are standing for Afghanistan.”

Earlier Friday, the National Resistance Front claimed it had fought back enemy attacks and surrounded Taliban militia at the Khawak Pass in the north-east of Panjshir.

In Kabul, the leader of the Hezb-e-Islami Afghanistan party, Gulbuddin Hekmatyar, issued a warning Friday to the population of Panjshir, which is largely Tajik.

Hekmatyar, a former prime minister and veteran power broker in Afghanistan, said people should not sacrifice themselves for the benefit of others. Some people in Panjshir were resisting the Taliban for personal gain and if defeated, they could go to other countries, he continued.

“Our Panjshiri brothers will be aware that the worst consequences of this war are on you more than anyone else. You will be harmed,” Hekmatyar told supporters in Kabul Friday, according to Afghan media.

CNN’s Alex Marquart and Mick Krever contributed to this report.