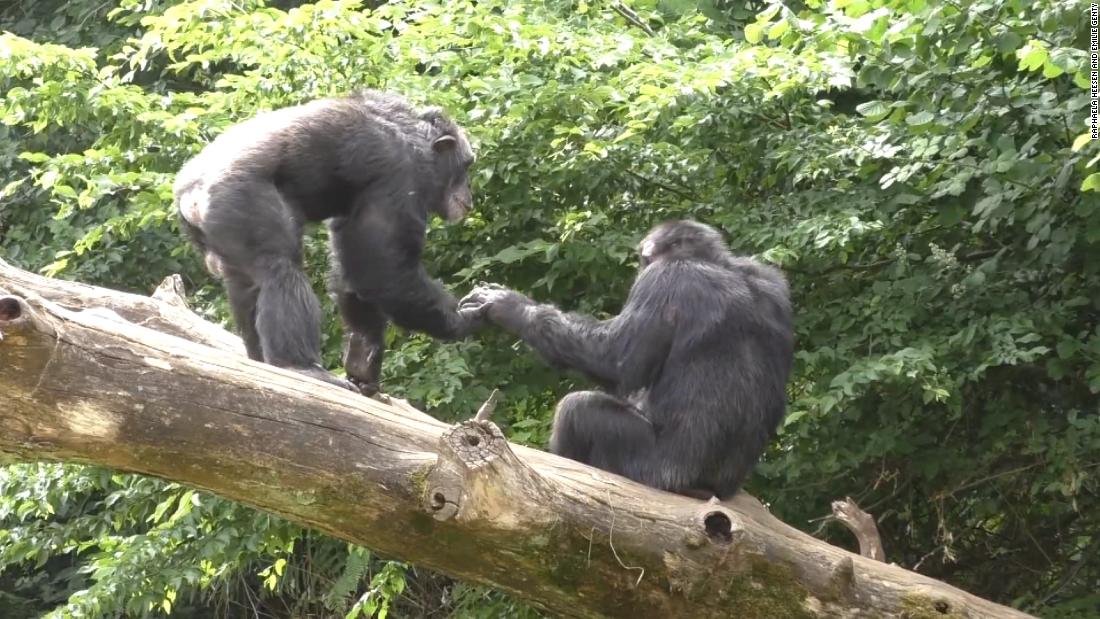 Researchers analyzed more than 1,200 interactions with groups of chimps and bonobos in zoos and found that they commonly exchange gazes or swap gestures to share their intentions about social interactions. Those gestures included touching each other, holding hand and even butting heads.

Bonobos exchanged “hello” signals prior to playing 90% of the time and chimps 69% of the time, according to the study, and goodbyes were even more common.

Scientists say the apes’ ability to signal hellos and goodbyes indicates something much bigger than politeness. It shows that chimpanzees and bonobos can communicate a mutual sense of obligation towards each other.

“In humans, that (sense of mutual obligation) bears witness of joint commitments,” said the study’s lead author Raphaela Heesen, a postdoctoral researcher at Durham University in the United Kingdom. “That underpins all kinds of joint interactions, including small scale ones — for example, you having lunch with your friends, or large scale ones, like big projects.”

“It’s like the glue of our success as a species, and that groundwork is present as well in bonobos and chimps as well,” Heesen told CNN.

Unlike previous studies, the researchers proposed that joint commitments are not only based on a feeling of obligation but also based on the process of mutually setting up the agreement and agreeing that it’s been fulfilled. That’s why Heesen says it’s significant that apes communicate with each other when they intend to begin and end interactions, such as playing or grooming.

The power dynamics and familiarity between two primates also played a role in how much of a “hello” or “goodbye” the animals offered up.

Heesen added that more research is needed to find out if other species also communicate the end of social interactions.

“We previously thought that humans were the only species that coordinate those entry and exit phases of interactions,” she said. “It hasn’t been systematically studied whether other species also take leave of each other like we do. We know that other species initiate interactions, so the ‘entry phase’ is common among other animals.”

Clare Redfern, a senior bonobo keeper at the UK’s Twycross Zoo who was not affiliated with the study, said scientists and zookeepers have long known that apes greet each other, but new research is enhancing their understanding of the animals’ behaviors.

“From the first sightings of these animals in the wild it has been obvious that these species greet each other; however, now that more studying is taking place about the species, more subtle behaviors have been picked up by researchers,” Redfern told CNN in an email. “The bonobos’ behaviors are a lot more subtle than that of the chimpanzees, whose gestures are more obvious, so some smaller gestures can be easily missed as they are subtle and happen very quickly.”

“The gestures we [commonly] notice with our bonobo groups are holding hands out to each other and also presenting body parts,” said Redfern.

She added that “eye contact and gaze holding are extremely important in bonobo behavior, which allows individuals to form a closer bond with one another.”

The study authors also say more research is needed into the origins and evolution of joint commitment behaviors in both humans and other species.