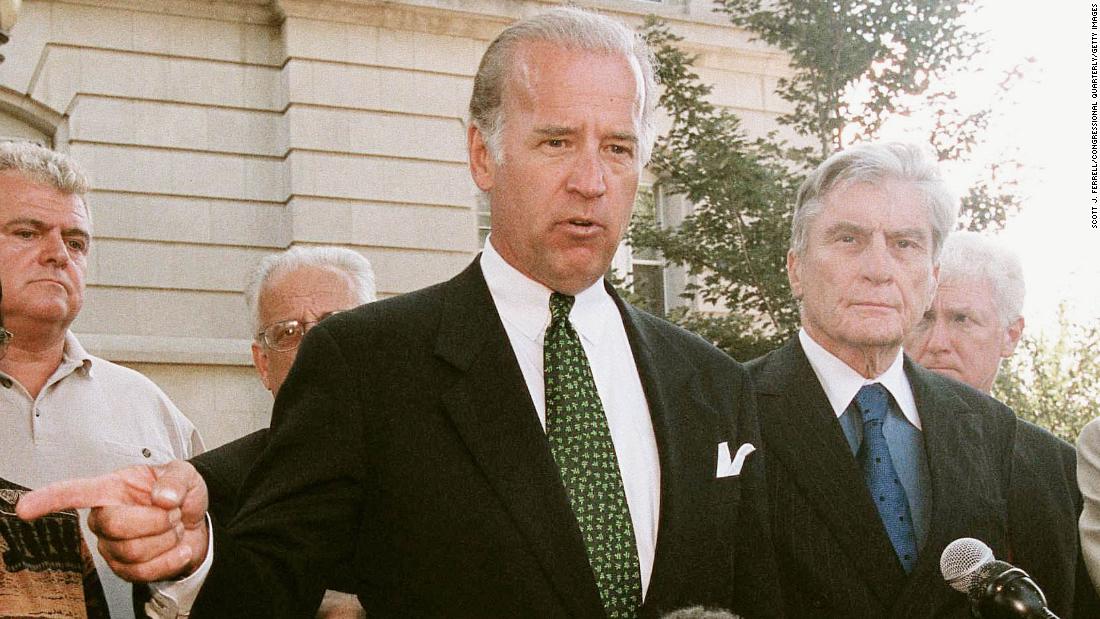 “Another plane … the other tower.”

Biden, then the chairman of the Senate Foreign Relations Committee, was on the 8:35 a.m. train from Wilmington to Washington — as he was most mornings — on September 11, 2001, when two planes flew into the twin towers of the World Trade Center in New York City. Now-President Biden on Saturday will mark two decades since those terrorist attacks by visiting the three sites where hijacked planes crashed — Ground Zero in New York; Shanksville, Pennsylvania; and the Pentagon in Arlington, Virginia.
In his memoir, “Promises to Keep,” Biden describes how he sought to project strength and unity to a shaken American public on that fateful day. He also writes about delivering a message to then-President George W. Bush, whose war in Afghanistan — launched in the wake of the attacks — he would later end with a chaotic and bloody withdrawal that sent Biden’s administration reeling.

When he got off the train at Union Station, Biden said he saw a brown haze of smoke in the sky beyond the Capitol dome. A third plane had just hit the Pentagon.

He made his way to the Capitol, which was being evacuated along with all House and Senate office buildings. The then-senator had insisted to his daughter — who called him to plead with him to leave Washington — that the Capitol was the safest place to be, even as people thought another plane was headed for the building, and congressional leaders had been whisked away on helicopters to a bunker.

“Damn it, I want to go in,” he told a police officer after he marched up the Capitol steps and tried to enter the building. The officer refused to allow him to pass. As he recounted in his memoir, Biden felt it important to “show the country we were still doing business.”

Linda Douglass, who was a reporter at ABC News at the time, said she saw Biden and then-Republican Sen. John Warner from Virginia discussing “who had the most seniority, because Biden wanted Congress to be called back into session.”

“He really felt it was important for the government to get right back to business,” Douglass said in an interview with CNN.

Biden agreed to appear on ABC News and followed Douglass a few blocks to where they had their camera set up.

Douglass said when she interviewed Biden, Bush was on Air Force One, then-Vice President Dick Cheney was in a secure bunker and congressional leaders had also been taken to safety.

“It was extremely important for the country to hear from a senior figure in the government,” Douglass said.

According to a transcript of the broadcast, Biden said the United States would track down those responsible for the attacks and in the meantime, urged the public to be “calm and cool and collected.”

“Terrorism wins when, in fact, they alter our civil liberties or shut down our institutions,” Biden said. “We have to demonstrate neither of those things have happened.”

He added: “This nation is too big, too strong, too united, too much a power in terms of our cohesion and our values to let this break us apart. And it won’t happen.”

Former Rep. Bob Brady of Philadelphia, a longtime friend of Biden, was with the then-senator for much of that day. He said he was giving Biden and Biden’s brother Jim a ride home when the President called from Air Force One to thank Biden for the comments he made on television.

“It was important to show the American people that everybody now was safe and that we were all together in this. There were the Democrats, the Republicans — we were going to be supporting the President totally. And that’s the message Joe sent, and that’s why the President called him,” Brady recounted in an interview with CNN.

During that call, Brady said Biden urged Bush to return to the nation’s capital. “Mr. President,” Biden told Bush, “come back to Washington.”

“You don’t want the people to see our leader going into a bunker. Get him out of there, put him back in the White House,” Brady said. “And he did, to his credit, he did.”

Biden wrote about the call with Bush in his book, “Promises to Keep: On Life and Politics,” saying Bush told him he was headed to an undisclosed location in the Midwest because the intelligence community had advised him against coming back to DC.

“I recalled at the time a story about the leader of the French resistance, Charles de Gaulle, near the close of World War II. When France was liberated, there was a celebratory parade down the Champs-Elysées in Paris — dignitaries, generals, and officers — led by Gaulle himself. As they walked toward the Hôtel de Ville, shots rang out from overhead, and everyone hit the ground except de Gaulle. He continued to walk ramrod straight,” Biden wrote.

After telling Bush he should return, Biden wrote: “I hung up the phone, and there was silence in the van until Jimmy spoke up.”

Biden wrote that his brother told him, “Whatever staffer suggested he call you just got fired.”

CNN’s Kevin Liptak and Jeff Zeleny contributed to this report.