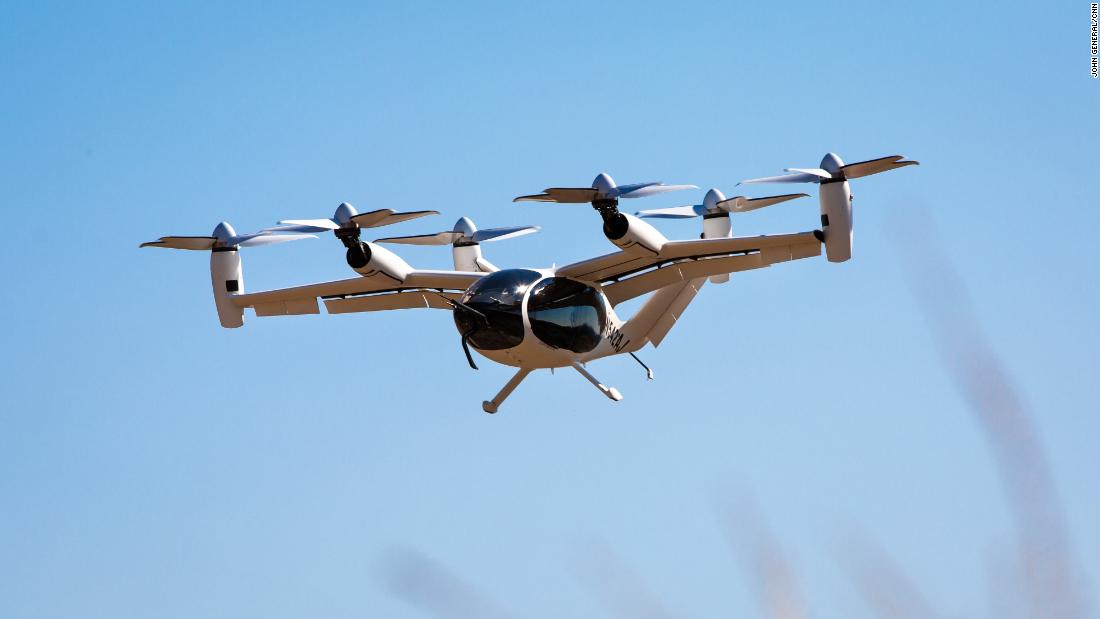 The 105-degree heat bore down on us as we rounded some brush and came across a barren airstrip. One hanger with an adjacent clutter of trailers lining one side of a runway. And there it was: an aircraft that looked straight out of a scifi comic book. With its six propellers, it wasn’t your typical helicopter, but it wasn’t a plane either.

What we were looking at was Joby Aviation’s electric solution to air travel — what’s called an eVTOL aircraft, which stands for electric vertical take off and landing. As the name suggests, the aircraft can take off and land like a helicopter but fly like a plane.

“It’s significantly safer, significantly faster and significantly quieter than the helicopters that are out there today,” Paul Sciarra, Executive Chairman of Joby Aviation and Co-Founder of Pinterest, told CNN Business, though Sciarra’s claims could not immediately be verified.

Electric trains have been shuttling passengers back and forth for over a century. Electric cars have existed nearly as long, though they’ve gotten a big boost in the last decade. But while the aviation era dawned at the beginning of the 20th century, it’s been almost entirely reliant on the internal combustion of petroleum products ever since.

For decades, commercial air travel has also largely looked the same. Despite advancements in aerodynamics and fuel mileage, it’s yet to overcome the two major problems of noise and air pollution. In fact, in 2019, air travel accounted for roughly three percent of all greenhouse gas emissions in the US — the highest its been since it’s pre-2008 recession all-time high, according to the Environmental Protection Agency, although passenger cars still make up the bulk of transportation-related greenhouse gas emissions at nearly 12 percent.

Joby says its eVTOL aircraft could be the solution for a cheaper, quieter and greener means of commercial flying.

“I think this service really allows people to rethink the way that we’ve thought about transportation, which has generally been thought about two dimensions, and really bring that to three dimensions,” Sciarra said.

What passengers can expect

Joby’s commercial operations, which it hopes to launch by 2024, will allow customers to book a seat on one of its aircraft like they would on a rideshare app. With a distance of up to 150 miles on a single charge and four-passenger capacity, Joby hopes that its aircraft can help relieve urban congestion.

On the company’s website, for example, it touts the possibility of getting from Los Angeles Airport to Newport Beach (a distance of roughly 35 miles as the eVTOL aircraft flies) in just 15 minutes compared to about an hour longer when driving. That could be very appealing for LA drivers who spent an average of 119 hours in traffic in 2017, according to a report from the Texas A&M Transportation Institute.

“We don’t have the problems of congestion in the sky because we’ve got another axis to work with,” Sciarra said.

Of course, a similar ride could be done with a helicopter, but companies like Joby predict that eVTOLs could make those trips less expensive and thus more accessible.

Electric vehicles often involve fewer moving parts than a combustion engine, which means less maintenance, according to the US Department of Energy. And electric batteries not only lower carbon emissions, they can reduce energy costs when compared to traditional jet fuel.

At launch, riders should expect the cost of flying on one of the company’s eVTOL to be “something like four dollars per passenger mile,” Sciarra said adding that he expects that per mile cost to come down to three dollars within two years. If that’s true and eVTOL aircraft can get to roughly the cost of ground transportation, there is reason to believe they could lessen the amount of cars idling in traffic.

Silence in the desert

Skipping traffic and opting to fly isn’t a new concept. Since the 1950’s, numerous companies have offered both scheduled and on-demand short to mid-range flight services.

“In many cities that are already helipads that are there. But unfortunately, they’re not used very frequently, and that’s actually largely because of the noise of helicopters,” Sciarra said, which is backed up by research from NASA. Joby has spent nearly a decade tinkering with the design so that the aircraft “could blend into the background noise of any city that was operating and take advantage of this infrastructure that’s sitting there sort of under our noses.”

As I stood watching the aircraft take off and buzz around in figure eights, it did sound remarkably quiet. At its loudest, the aircraft is 65 decibels, according to Sciarra, which is roughly the sound of an air conditioner. From about 50 yards away, the aircraft’s six propellers taking off reminded me of the fast whir of my small, recreational drone, and by the time it was a quarter of a mile away, it was silent. At flyover, the aircraft’s noise was noticeable but not distracting compared to traditional aircraft.

Joby’s quest for a quieter, greener aircraft has also drew the attention of NASA, which had a team on-sight during my visit to monitor the noise of the aircraft.

“You usually have to remind people that the first ‘A’ of NASA is aeronautics,” Starr Ginn, NASA’s National Campaign Lead told CNN Business. “It’s important to understand what noise signatures look like for these planes because we want to understand how we’re going to integrate the operations into the community.”

In 2020, Joby received the first-ever air worthiness certification for an eVTOL aircraft from the US Air Force. It’s aiming for full FAA approval in 2023, the company said. To get there, Joby’s landed a strategic partnership with Toyota which has invested $394 million in the company while lending its expertise in manufacturing. Additionally, Uber has invested $75 million after Joby acquired its Elevate team — the rideshare company’s former eVTOL initiative.

Joby’s partnership with Uber will allow the company to offer its eVTOL service directly in the Uber app, but Joby also plans to have a direct-to-consumer app of its own, according to Sciarra.

This year, Joby went public on the New York Stock Exchange becoming one of the first publicly traded eVTOL companies. As of publishing, they’re valued at over $5.5 billion. Before it gets to a commercial launch though, Joby will have to contend with an increasingly crowded market of other eVTOL companies.

Astro Aerospace, Volocopter and Vertical Aerospace, among others, are all working on electric fleets of their own to taxi customers. They pack numerous big-named investors too. Vertical Aerospace, which is based in the UK and also plans to go public this year, already has pre-orders for its eVTOL aircraft from American Airlines and Virgin Atlantic, as previously reported by CNN Business.

So far, no companies have received approval to fly commercial passengers just yet.

As I pulled out of the desert and my wheels rolled onto the scorching hot asphalt, the loud drone of the highway’s traffic was already in earshot.