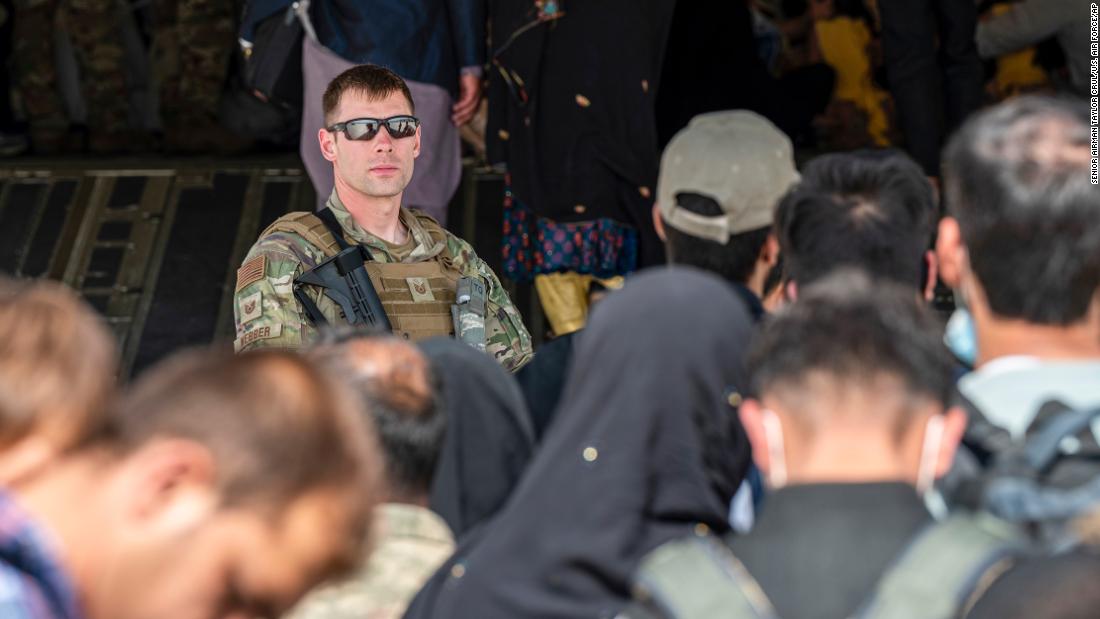 Nongovernmental groups and newly formed ad hoc volunteer organizations have worked around the clock to identify Afghans and get their names into the hands of the State Department, while trying to find charter planes that can go into Kabul.

Senate aides have even been on the phones with US citizens while they’ve been stopped, harassed and attacked by the Taliban.

Lawmakers have reached out to Marines on the ground in Kabul and to their contacts in the State Department and Pentagon to try to streamline the process. As the US military has ramped up its operations to evacuate people, outside groups are trying to coordinate charter flights that can supplement those efforts.

But the Taliban checkpoints and chaos at the gates outside the airport have stopped many thousands from getting inside the airport, let alone on planes, subjecting them to harsh conditions and violence from the Taliban. The difficulties have pushed advocates and lawmakers alike to urge President Joe Biden to extend an August 31 deadline to finish the withdrawal of US troops, arguing there’s not nearly enough time to get everyone out in the next two weeks.

“We have so many people being turned away, particularly women,” said Stacia George, director of the Conflict Resolution Program at the Carter Center, adding that she’s working with a network of trusted people to try to arrange transportation to the airport for those at risk.

The reality on the ground

Congressional offices across the country have taken on thousands of cases over the past week that have come from friends and relatives of people stuck in Afghanistan, including American citizens fearful of trying to escape, Afghan interpreters who worked with the US military and Afghan woman now at risk under Taliban rule.

While Biden claimed Friday that Americans are being allowed to pass through Taliban checkpoints, many congressional offices have been told a different story on the ground.

Congressional aides say they’ve been in touch with Americans too afraid to pass through the Taliban checkpoints in Kabul. Others have made it through but not without harassment and violence.

Aides to Sen. Tom Cotton, an Arkansas Republican, said their office has heard from more than 1,000 people seeking help, including hundreds of US citizens. Their staffers have been on the phone with Americans as they were physically attacked by the Taliban while out in the streets in Kabul, the aides said.

Rep. Seth Moulton, a Massachusetts Democrat who’s a Marine veteran, said his office has been helping more than 500 individuals who have come to him through veterans, diplomats, activists and others desperate to get their friends and relatives out.

He spoke to one woman in Afghanistan, who is the wife of a green card holder and six months pregnant with a 5-year-old son.

“They waited for hours in the searing heat until she got so sick she had to go to the hospital and was unable to get through the gate,” Moulton said. “The Taliban has already come to their home, so they don’t want to return home.”

Moulton, who served in Iraq, said he had spoken to Marines at the Kabul airport on Friday, who said they needed more troops on the ground and more time to complete the evacuation.

“I spoke to a Marine an hour ago who said, ‘You’ve got to make them extend the deadline — we’ll stay here as long as it takes, but we’ve got to finish this job,’ ” Moulton said.

Rep. Carol Miller, a Republican from West Virginia, has been speaking with individuals who are stuck in the country. CNN spoke directly with one individual who described trying to go to the airport to leave with their family but being forced to turn back home after it became too unsafe to push on.

“We are trying to do whatever we can through our channels in the government, but we are also trying to keep the communication alive for them,” Miller told CNN.

Rep. Tom Malinowski, a former State Department official, has been helping to connect Afghans on the ground with some outside groups that have been coordinating charter flights out of the country alongside the US government.

But the New Jersey Democrat admits that so much is outside the control of US lawmakers right now. Malinowski said he’s heard directly about Afghans being beaten on their way toward the gate.

“It took them days,” Malinowski said of some who have gotten out. “Then we have also had a lot of people who have made it to the gate, having been asked to come to the airport by the US State Department, who were then turned away by US Marines or in some cases the Brits or the Turks. This was as of yesterday. I know the administration was trying to get a handle on that.”

Congressional offices have been given a State Department email to process the requests they’ve received to evacuate people from Afghanistan, in order to get them on the necessary lists to be cleared for flights. The number of cases is easily in the thousands, and the congressional offices are working through them just as they would for a constituent who had a problem with a Social Security check.

The office of Sen. Jeanne Shaheen, a New Hampshire Democrat, says it has fielded nearly 500 requests. The office of Rep. Jason Crow, a Colorado Democrat, has helped process more than 800 visa applications, a spokeswoman said.

Desperate to get out

Nongovernmental groups have focused on helping to remove Afghans who applied for the Special Immigrant Visa program and served alongside the US military as well as other vulnerable Afghans, particularly women, who are also at risk under Taliban rule.

There have been some successes with evacuations. No One Left Behind, a group that’s pushed for helping Afghan interpreters through the Special Immigrant Visa program, announced a new joint coalition that got its first flight out on Friday.

The Biden administration said it had evacuated approximately 13,000 people since last Saturday on government flights, in addition to facilitating the departure of at least 11 charter flights. Flights were halted for at least eight hours on Friday but started back up, and advocates are hopeful that more charter flights will be cleared to land at the Kabul airport this weekend.

The Carter Center’s George, who formerly worked in Afghanistan with the US Agency for International Development, has been sitting with her husband, a veteran, for the past week, fielding inquiries and pinging contacts to try to get Afghans to safety.

“The moment we saw the direction things were going, people who served in Afghanistan started mobilizing around, ‘OK, how do we work to get former colleagues out?’ ” she told CNN.

George has been receiving calls from people she knows who will then flag individuals who worked for the US government and need to evacuate with their families. She’ll collect their information and send it to the State Department or the most appropriate avenue.

Deepa Alagesan, part of the litigation team at the International Refugee Assistance Project, said that dozens of their clients, including Special Immigrant Visa applicants, are at the airport trying to get on evacuation flights, some waiting more than 24 hours in harrowing conditions.

“Some clients have made the hard decision to turn back and go home because they’re so worried about potentially dying in the crowds outside the airport before making it inside for an evacuation flight,” Alagesan said.

Yalda Afif, a program manager at the refugee assistance organization HIAS, has similarly been fielding calls from people desperate to evacuate. “They know they’ll either be killed there and if they don’t leave, they’ll be killed after,” she said, adding that people have described beatings, stampedes and shots fired outside the Kabul airport.

There have been several charter flights coordinated with the US military to try to help Afghans get out, although they have not yet resumed. Advocates say they’re hopeful the charter flights will start back up as soon as Saturday.

One group, the Afghanistan Evacuation Coordination Team, is a newly created volunteer organization that’s organized several charter planes ready to go into Afghanistan, said Evanna Hu, the CEO of the artificial intelligence company Omelas, who is co-leading the group. Hu said the group has a list of 200 to 300 individuals who have worked for Western nongovernmental and media organizations.

But some of the people the group has tried to help have been turned away, even American citizens, underscoring the peril still on the ground. Hu said she has spoken to some people who were turned away at the gate or refused entry because they had gone to the wrong gate. One woman, a dual citizen cleared to go with another NATO country, was beaten as she was trying to get into the airport.

“She didn’t even get close,” Hu said. “About 200 meters from the gates, she got whipped. She sent me pictures of the whip marks on her hand.”

There is “a major choke point” getting US allies out of Afghanistan, said Jennifer Quigley, senior director for government affairs at Human Rights First, pointing to the chaos and violence outside the airport.

“It’s the crowds that have amassed, and how volatile and violent the situation has become,” she said.

In one instance, the aunt of someone in the US, who is herself a US citizen, tried for 12 hours to get to the gate of the airport but was hurt in the crowd and eventually had to give up and go back home, according to Quigley.

Only two of the nine families that Quigley’s organization was working with to help get them out of Afghanistan made it through the entry point to the airport.

“It’s not acceptable,” Quigley said of the lack of US-managed crowd control outside the airport. “If you’re saying that you’re evacuating people, you’re actually not, because they can’t get through.”