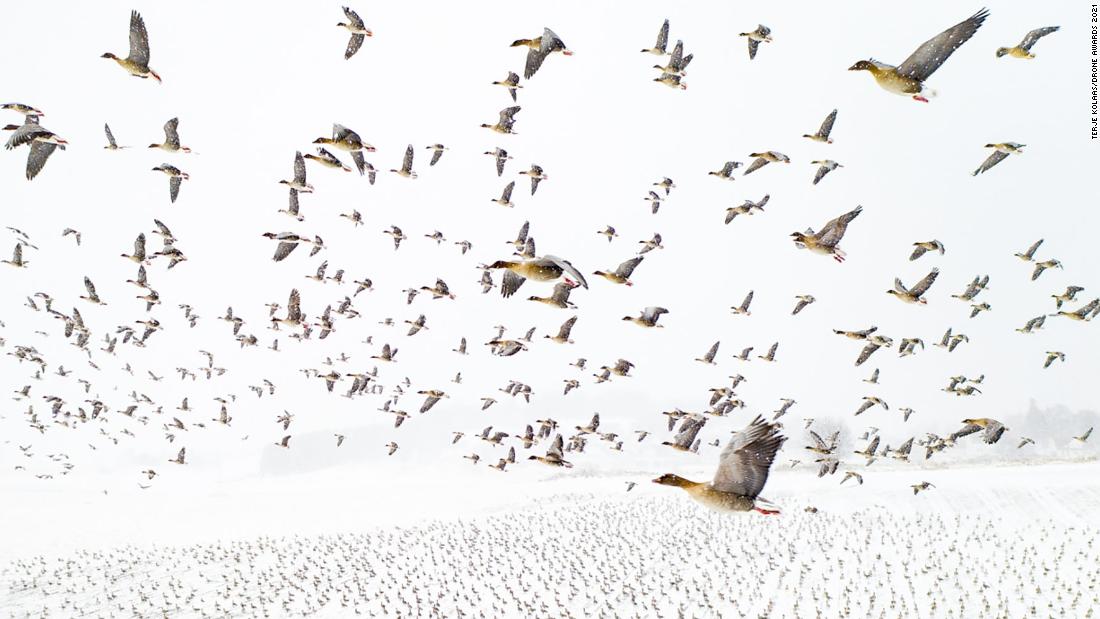 (CNN) — A turtle heading into the sea, a volcanic eruption and a spectacular sunset feature among the winners of the Drone Photo Awards 2021.
The overall winner is an image of thousands of pink-footed geese flying over snowy ground by Norwegian photographer Terje Kolaas, announced the Siena Awards, the international festival of visual arts that organizes the competition, in a press release Tuesday.

Alongside Kolaas’ amazing image there are category winners selected from tens of thousands of submissions from 102 countries, according to the organizers.

The overall winner is this image of thousands of pink-footed geese by Norwegian photographer Terje Kolaas.

Russian photographer Sergei Poletaev won the Urban category with his image of a monastery near Moscow backed by a huge power plant, while Oman’s Qasim Al Farsi took first place in Wildlife with a shot of a green turtle preparing to return to the sea after laying its eggs.

Australia’s Phil De Glanville captured the moment surfer Ollie Henry took on a frightening wave to win the Sport category, and Vietnamese photographer Trung Pham Huy topped the People category with an image of a fisherman in a mangrove forest.

US photographer Martin Sanchez’s photo of a volcanic eruption in Iceland won the Nature category; Romanian photographer Gheorghe Popa won the Abstract category with his image of waterways in Transylvania poisoned by chemical waste from copper and gold mining; and the Wedding category was won by Matteo Original, from Italy, with an image of a sunset in Marina di Pisa.

The images will feature in an exhibition which will run in the Italian city of Siena from October 23 to December 5.