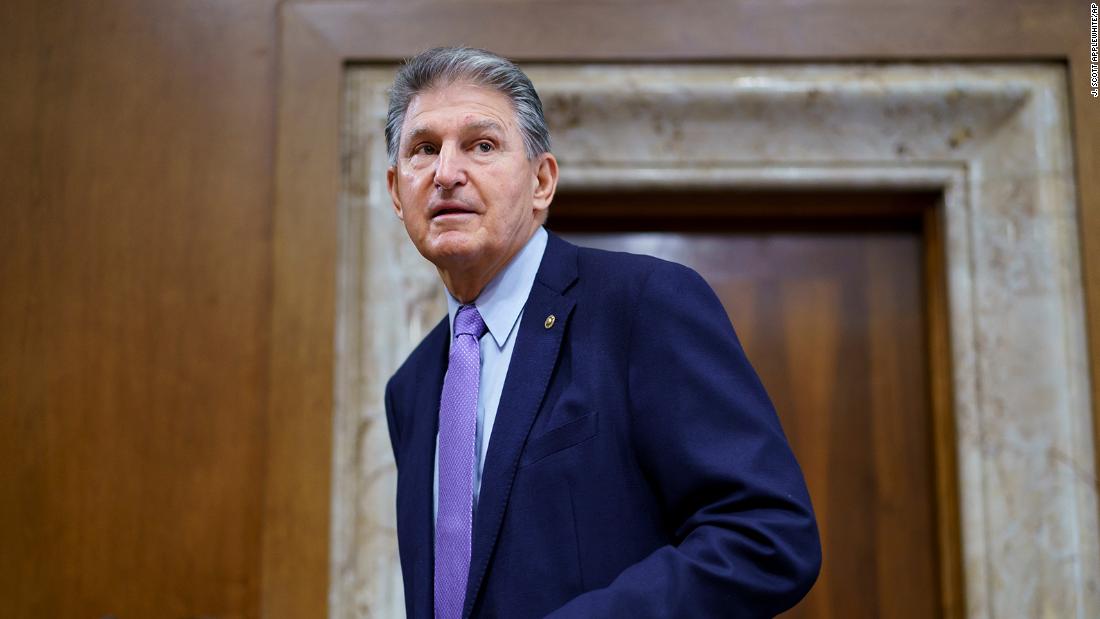 In a Thursday letter to Fed Chairman Jerome Powell, Manchin called for the US central bank to immediately reverse course and remove stimulus support for the economy before it overheats.

“With the recession over and our strong economic recovery well underway, I am increasingly alarmed that the Fed continues to inject record amounts of stimulus into our economy,” the moderate lawmaker from West Virginia wrote.

Manchin credited Fed policies as “instrumental” to helping America avoid a long-term economic crisis from Covid. However, he urged Powell and other Fed officials to scale back the $120 billion worth of bonds the central bank is purchasing each month.

“It is imperative we begin to understand that long term policy responses tailored for an economic depression,” Manchin wrote, “may not be what is required for today’s economy and could result in higher than desired inflation if not removed in time.”

Manchin’s critique was not exclusive to the Fed. The Democrat said he is “deeply concerned” that the Fed stimulus, on top of proposals for additional fiscal stimulus, “will lead to our economy overheating and to unavoidable inflation taxes that hard working Americans cannot afford.”

A Fed spokesperson said the central bank has received the letter and plans to respond.

Inflation is here. For how long?

The criticism comes after consumer prices spiked in June at the fastest annual pace since 2008. Everything from used cars and airfare to laundry machines and bacon has become more expensive.
The Fed, White House and many economists argue this bout of inflation will be temporary, fading as supply catches up to surging demand and the economy gets back to normal, or something close to normal.
“We won’t have an extended period of high inflation,” Powell said at a press conference on July 28. “We think that some of it will fall away naturally as the process of reopening the economy moves through.”

However, Powell, whose term expires in February, acknowledged it “could take some time” for prices to fade. Powell emphasized the Fed won’t hesitate to step in if inflation expectations get out of whack.

The Fed’s task is being further complicated by the Delta variant, which could ease inflation in the short term but make supply chain issues even worse in the medium and long run.

‘They need to be careful’

Rick Rieder, BlackRock’s chief investment officer of global fixed income, wrote in a note that Friday’s jobs report shows the economy is “very close” to maximum employment and may be at risk of an “overheating” in some areas. He urged the Fed to begin tapering its bond purchases.

“The Fed has done a very admirable job in guiding policy through the pandemic period,” Rieder wrote, “but they need to be careful at this stage not to inadvertently undermine much of that progress.”

Despite Manchin’s concerns about fiscal stimulus, the Biden administration’s $4 trillion Build Back Better agenda is not the kind of a short-term injection of support for the economy that would typically fan inflation. Instead, it represents a long-term investment in roads, bridges, childcare and worker training — all steps that could ease inflation and boost productivity.

“Worries that the plan will ignite undesirably high inflation and an overheating economy are overdone,” Mark Zandi, the chief economist at Moody’s Analytics, wrote in a report released last month. “Much of the additional fiscal support being considered is designed to lift the economy’s long-term growth potential and ease inflation pressures.”