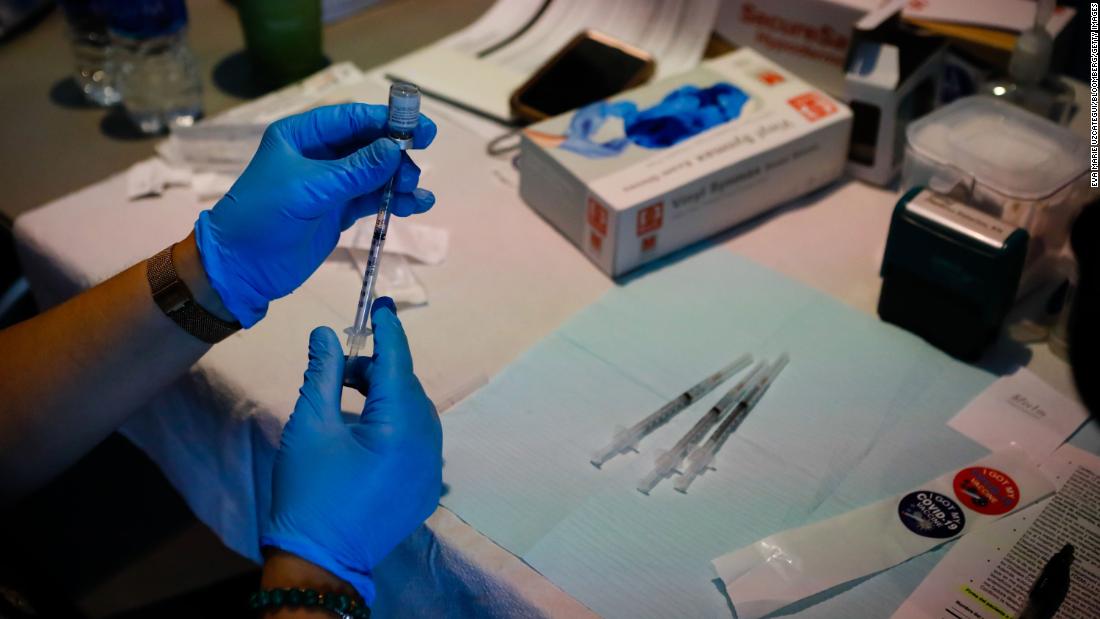 There is an old adage, sometimes attributed to Neil deGrasse Tyson, that “ignorance is a virus.” It showed up on a protest sign in Los Angeles last month when a man sought to counter anti-vaccine demonstrators. His sign said “Your ignorance is a virus. GET vaccinated!”
I noticed the same sentiment on Twitter Monday afternoon, posted by former CNNer David Clinch, in response to a rage-inducing story about people who aren’t willing to get a free Covid-19 vaccine, but are shelling out money for fake vaccine cards. “Ignorance is a virus,” Clinch wrote.
Incomprehensible conspiracy theories, illogical memes, bogus ideas — they all spread face to face and text to text in highly personal ways, and through wickedly viral platforms that spread nonsense from country to country in mere minutes. And we’re all witnessing this spread in near real time due to the most recent Covid-19 surge in parts of the US. “Arkansas has just 8 ICU beds available,” “Two Texas ERs temporarily shut down because of Covid,” and “DeSantis escalates war on masks in schools” are three of the headlines on CNN.com right now.
The unvaccinated are bearing the brunt of the pain and suffering. Disputes between vaccinated adults and unvaccinated adults increasingly have the feel of a death match, since this really is about life and death. Reporters are operating in the space between these two Americas and trying to explain one side to the other by interviewing vaccine opponents and the health care officials who are trying to help them. It can make for excruciating reading at times, but it’s also incredibly informative…

I have noticed that almost every front-line story cites America’s information crisis and depressingly low levels of social trust:

— Baton Rouge, Louisiana: “Somehow, we have failed our messaging,” Dr. Frank Courmier told The Acadiana Advocate’s Megan Wyatt as his hospital filled with critically ill patients. “There seems to be a war over truth,” he said. “And I think that there is a brunt determination, for me at least, that truth will win, no matter how bleak it looks right now.”
— Long Island, New York: A 65-year-old man told Newsday’s David Olson that “I don’t trust the government. Are you kidding me? What they did to Trump.” His equally vaccine-resistant wife said “a relative of ours has told us they put aborted baby fetuses in the vaccine.” (False.) Olson also quoted a 71-year-old man who said he didn’t “know what to believe,” but was “reading and listening to the news about people who got the shot and they still get the COVID. To me, it’s really not doing much.”
— San Antonio, Texas: The Express-News interviewed Victor Velos, “a retired pulmonary specialist on the West Side,” who is “having a difficult time convincing his two youngest sons, in their mid-20s, to get the vaccine. The brothers get their information about vaccines from 4chan, an online forum that allows users to remain anonymous and where falsehoods about the vaccine have spread.”
— Tulare County, California: The Fresno Bee’s story about a “vaccination desert” in California’s Central Valley opened with a 29-year-old agricultural worker who “knows many people, including his girlfriend, who have fallen ill to the virus. And in the past month alone, two of his friends died from complications related to the disease. Still, he hasn’t made vaccination a priority, in part due to the misinformation about the shot he’s read online.”
— Hyattsville, Maryland: Mike Brown, owner of The Shop Spa, told CNN’s Nicquel Terry Ellis that “we have been trying to get the correct information to the community because they are swimming in pools of misinformation and they’re buying it. So I’m enlightening them on the facts and making sure they get the correct information that can battle their conspiracy theories.”
— Boston, Massachusetts: “Misinformation coming out of Haiti, which has the lowest Covid-19 vaccination rate of any country in the world,” is having a particular impact on the Mattapan neighborhood, “which has the largest Haitian community in the state,” and the lowest vax rate in Boston, Tori Bedford reported for GBH.
— Far Rockaway, New York: In a neighborhood with low vaccination rates, community organizer Jazmine Outlaw said “lack of information is why people miss out on things.” Plus, she told Politico’s Téa Kvetenadze, people “don’t trust a lot of the information that’s given out.”
— Heflin, Alabama: Ryan Jackson, a pharmacist, told the LA Times that he has heard all the conspiracy theories. But it’s even deeper than that: “They don’t trust the government, a lot of political factors. It’s just a complete distrust of everybody in authority.” But he’s somewhat hopeful that “more people will come around” as the unvaxxed see that the vaccinated are “not growing extra limbs and third eyeballs.”

New York Times reporter Nicole Hong’s story about “one company’s struggle to get all its employees vaccinated” is having a longer lifespan than Hong could have expected.

It’s because of this paragraph about one reluctant employee at Metro Optics Eyewear in the Bronx: “One employee said she was concerned because she thought a vaccine had caused the characters in the film ‘I Am Legend’ to turn into zombies. People opposed to vaccines have circulated that claim about the movie’s plot widely on social media.”

It really is a popular meme, believe it or not. On Monday, several days after Hong’s story came out, one of the writers of “I Am Legend” chimed in. Akiva Goldsman, a co-writer and executive producer of the film, tweeted, “Oh. My. God. It’s a movie. I made that up. It’s. Not. Real.”

Meet “the Tucker Carlson fans who got vaxxed”

Olga Khazan of The Atlantic asked more than a dozen “vaccinated fans of the Fox News host,” mostly IDed via Twitter, about “what it will take to get more Republicans to get their shots.” Khazan said “one factor seemed to have played the biggest role in my interviewees’ decision to get vaccinated: a genuine fear of Covid-19.” She concluded that “a strategy based on fear” might make sense…

Laurie Garrett, the acclaimed science reporter, pointed out on Monday that “the internet is blowing up with stories like these” — stories about vaccine skeptics, sometimes outright opponents, who wind up dying as a result of the virus. She linked to a Slate story about Dick Farrel, a right-wing radio host in Florida who died last week, and a CNN story about six members of a Florida church who died in recent weeks.

Garrett said that “liberals respond” to the stories “with snide, superior comments — a ‘serves ’em right’ attitude. But we won’t stop #COVID19 unless we express compassion. Why were they misled? How can we help?”

— Ray A. Smith’s new story is headlined “Vaccination Status Has Americans Picking Sides…” (WSJ)
— PolitiFact’s page full of Covid fact-checks is an eye-opening look at what sorts of stupefying memes are making the social rounds… (PolitiFact)
— Charles Blow on the toll of “anti-vax insanity:” There are “people dead today — a lot of them! — who should still be alive and who would be if people in the heights of government and the heights of the media had not fed them lies about the virus…” (NYT)
— A fake website went “viral in anti-vaxxer circles” after rumors spread that a website was “offering money to people willing to snitch on their unvaccinated family, friends, and neighbors,” David Gilbert reports… (Vice)
— This dynamic is related: Zeeshan Aleem argues that “political and media elites on the mainstream right are creating a climate in which the very idea of a knowable, shared reality is becoming extinct.” That’s what Dr. Frank Courmier in Baton Rouge was talking about: The insidious “war on truth” that must be defeated… (NBC)