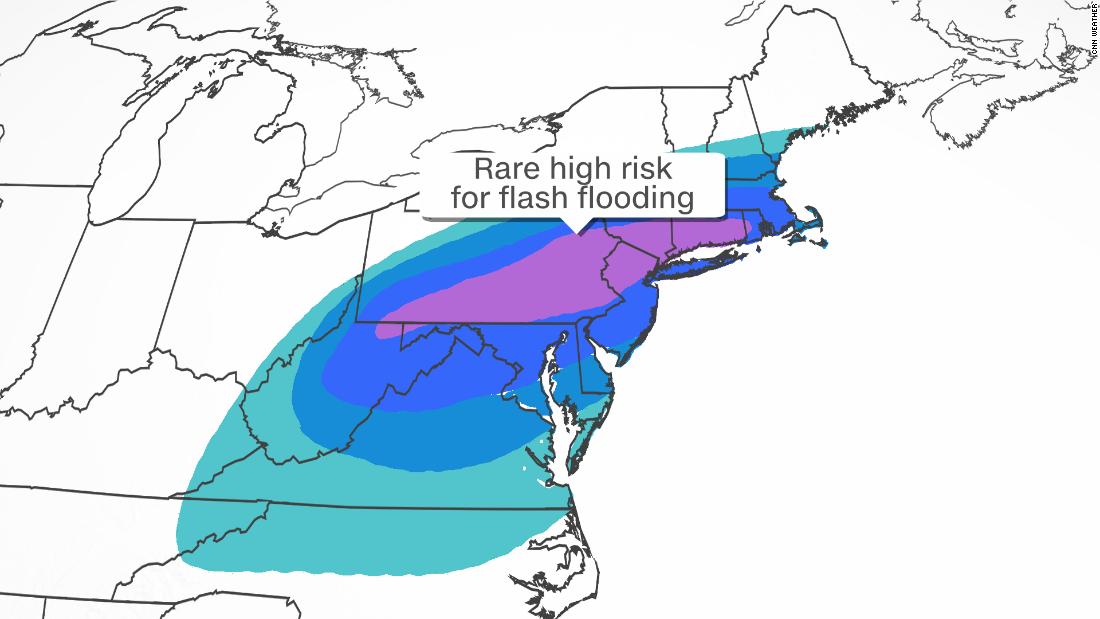 “Flash flooding, some of it significant and potentially life-threatening, is expected going through the late morning and early afternoon hours as T.D. Ida approaches the region from the Southwest,” the agency’s Weather Prediction Center said Wednesday morning.

The areas of greatest concern include northern Virginia, Maryland, Pennsylvania, and eastern West Virginia. Hourly rainfall rates of 2 to 3 inches are expected in the heaviest storms, with total amounts of up to 6 inches and isolated heavier amounts possible.

“Flash flood emergency level rainfall impacts are possible as we head into the afternoon hours,” the WPC said, referring to the highest level of flood warning that often indicates immediate and significant threats to life and property.

The remnants of Ida could bring flash flooding into southern New York and the southern part of New England later on Wednesday.
“Five inches of rain just doesn’t happen in this region very often,” said CNN meteorologist Brandon Miller. “We could easily see some deadly flash floods like we saw in Tennessee last week.”

The nearest town downstream from the dam is Wilmore. The weather service warned this is a particularly dangerous situation. A tornado watch was also issued for parts of southeast Pennsylvania, the agency said in a tweet.

“This is an extremely dangerous storm that is impacting the entire state. As we continue to monitor the conditions, I ask everyone to please stay home if you’re able,” Wolf said in a statement. “If you must travel, please monitor the latest road conditions and weather updates.”

Ida made landfall in Louisiana on Sunday as a Category 4 hurricane, and though it has weakened significantly since, it has still dropped heavy rain across the Southeast on its way north.

The WPC has issued the highest alert level (4 out of 4) for excessive rainfall from southern and eastern Pennsylvania into Connecticut.

More than 60 million people are under flash flood watches for parts of the central Appalachians, Mid-Atlantic, and into southern New York and southern New England. Rainfall of 3 to 8 inches is expected with isolated higher amounts forecast within the next two days in this area.

Areas that normally do not experience flash flooding will flood. Lives and property are in great danger through Thursday morning from the northern Mid-Atlantic to the Northeast.

“Gulf hurricanes often have a ‘second card to play’ when they reach the Northeast,” Miller said.

“The eastern foothills of the Appalachians are vulnerable to flooding because of geography. All the moisture from the Gulf and even the Atlantic are pushed up against the mountains by the circulations around Ida. The mountains enhance the rainfall, then gravity takes over (and) the water flows downhill, which can lead to significant flash flooding,” Miller said.

We could see rainfall rates of 1 to 2 inches per hour within the heavy downpours expected, causing rivers to quickly rise and flash flooding in urban areas.

A tornado threat for this same region also will continue for Wednesday.

Several tornadoes and scattered damaging winds are probable across portions of the Mid-Atlantic, mainly during the afternoon and evening hours. A level 3 out of 5 risks for tornadoes covers the Mid-Atlantic, including Philadelphia, Baltimore and Washington, DC.

New York state agencies are bracing for Ida to possibly blanket downstate with half a foot or more of rain in some areas as well and for the threat of an isolated tornado.

Agencies are preparing response assets, New York Gov. Kathy Hochul said Wednesday, with thousands of pieces of equipment ready to deploy and a 24/7 Department of Transportation command center propped up.

“New York City, Long Island, and areas in the Southern Tier, Mid-Hudson Valley and Capital District could see up to six inches of rain, with locally higher amounts, as Ida passes through the area,” the release from the governor said.

“There is also the potential for strong thunderstorms with gusty winds through early Thursday, as well as the threat of an isolated tornado, especially for downstate areas,” the release said. “Ida is expected to move quickly to the northeast with rainfall ending across eastern portions of the state by late Thursday.”

Similarities between Hurricanes Ida and Camille

“There are certainly a lot of similarities with Ida and Camille more than 50 years ago,” Miller said.

“Both storms formed in the same spot, hit near the same spot and both have a similar trajectory over the Northeast. Camille’s floods in the northeast were deadly.”

That storm brought up to 27 inches of rain to portions of the Mid-Atlantic, leading to rising rivers sweeping through Virginia towns.

Camille first hit the US as a dangerous Category 5 hurricane along the central Gulf Coast in August of 1969.

The storm followed a path very similar to Ida through Tennessee, Kentucky and off the Mid-Atlantic coast.