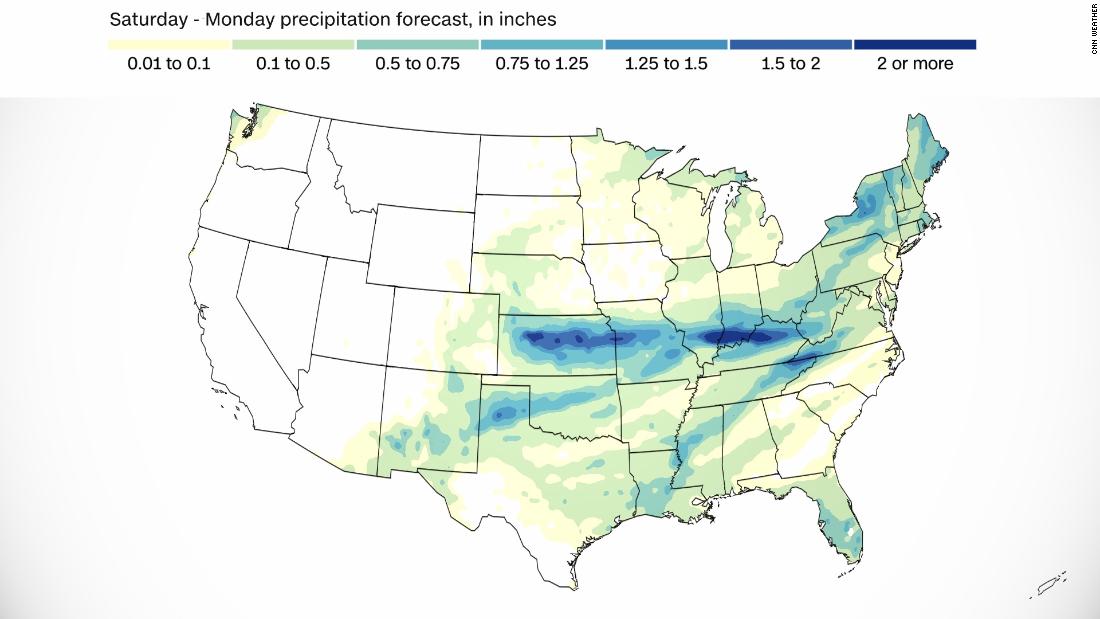 After record drought, wildfires and multiple tropical weather systems making landfall, the United States could use a break — especially people cleaning up from Hurricane Ida.

But not all areas affected by Ida will be rain-free this weekend.

Thousands are still without power in Mississippi and Louisiana from Hurricane Ida. Many of the people cleaning up will have to contend with isolated showers and thunderstorms.

New Orleans and Baton Rouge as well as Biloxi and Hattiesburg, Mississippi, have low-end rain chances just about every day this holiday weekend.

Heat and humidity will also be high this weekend along the Gulf Coast. High temperatures this weekend for New Orleans and Baton Rouge will reach 90 degrees with a heat index up to 100.

A heat advisory is in effect once again on Saturday for southeastern Louisiana and extreme southwestern Mississippi given the dangerous heat expected.

“With so many people still without power and air conditioning in Louisiana and Mississippi, cool mornings would be a blessing,” says Chad Myers, CNN meteorologist. “Unfortunately the expected low temperatures don’t get much below 80 all weekend in the affected areas.”

Rain chances remain for some

Florida also has rain in the forecast this weekend, which will make for less than ideal conditions for those hoping to flock to the beach.

Rain is in the forecast all three days of the holiday weekend from Tampa to Orlando and down to Miami.

The heaviest rain this weekend will be more in the center of the country. Rain chances will tick up Saturday in areas between Albuquerque, New Mexico, and Louisville, Kentucky.

Rain accumulations are forecast to be highest in northern Arkansas, southern Illinois and Missouri, where 1-3 inches is expected.

Sunshine will return to the forecast Sunday for Kansas City, St. Louis and Springfield, Illinois. Clear skies should return Monday for Albuquerque and Louisville.

“The Northeast will see a welcome break from Ida’s rain, with dry and pleasant early fall-like weather,” says Dave Hennen, CNN meteorologist. “There could be some rain by late in the weekend, but rainfall amounts should be light.”

Philadelphia and New York, which were hit hard by Ida a few days ago, will have sunny skies and mild temperatures Saturday to allow for cleanup efforts. However, there are low-end rain chances in both cities on Sunday.

The rain on Sunday is expected to be light, which is good since the ground is already oversaturated.

Most cities in the Northeast will have temperatures that are normal for early September, giving a nice reprieve from the summer heat.

“The Midwest and northern High Plains will join the Northeast in experiencing a rather cool start to September,” the WPC also added.

Where summer will be staying

“By Sunday the heat will be building up again in the West and many locations will experience middle of summer-like temperatures,” Hennen says. “One hundred-degree plus temperatures are expected over a wide area from the Southwest into the Rockies, with some locations as much as 20-25 degrees above normal for this time of year.”

Smoke from the Dixie and Caldor wildfires will also continue to cause issues with air quality this weekend for California and Nevada. Colorado, Oregon and Washington will also be dealing with air quality alerts thanks to poor smoke dispersion.

Heat is also going to be a key component to the forecast out west as high pressure builds over multiple states.

“Temperatures will climb each day through the weekend back to above-average territory,” says the National Weather Service office in Las Vegas. “Make sure you’re drinking plenty of water, especially if recreating this weekend!”

Las Vegas and Reno, Nevada, will see temperatures 5-15 degrees above normal this weekend.

Denver will start the weekend off close to normal with highs in the low to mid-80s, then jumping to high temperatures well above average in the low 90s by Monday.

An excessive heat watch is in effect for portions of California, Arizona and Nevada on Monday and may extend later into the week as well.