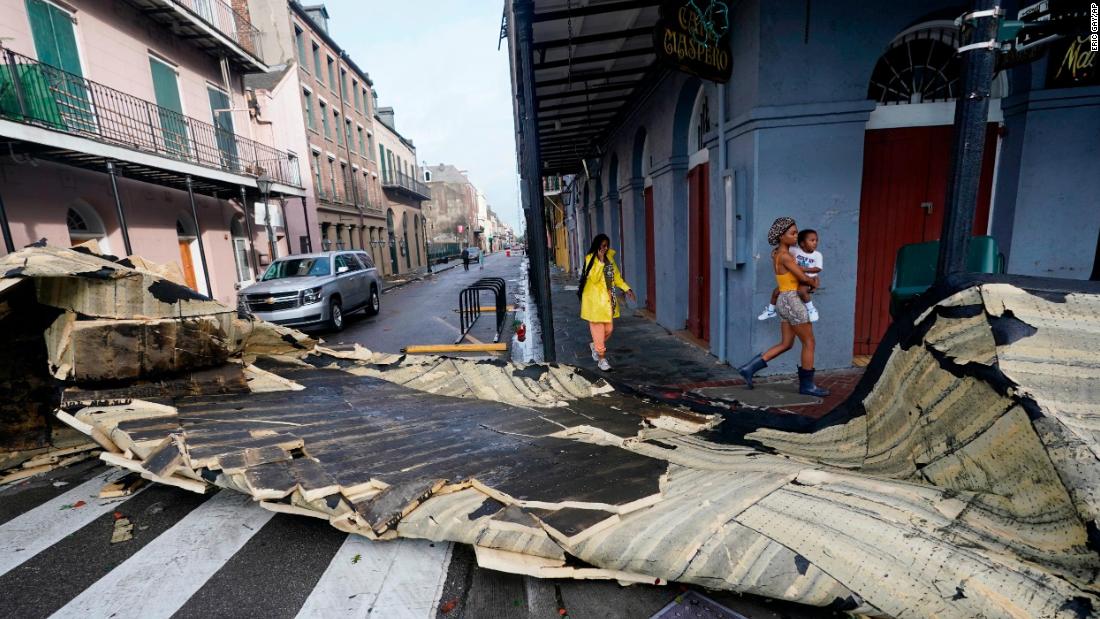 A day after Ida hit the state, here’s an early look at how the two storms compare.

Though both major hurricanes hit Louisiana, the two storms differ in clear meteorological ways and in their paths through the state.

Katrina first made landfall early on August 29, 2005, as a Category 3 storm with maximum winds of about 125 mph near Buras, Louisiana, the National Hurricane Center said. It had been a Category 5 storm in the Gulf of Mexico and weakened significantly before making landfall, but that prior strength meant that it created a very high storm surge.

Katrina was also huge in geographic size, and hurricane force winds stretched up to 110 miles from its center.

The storm brought hurricane conditions to Louisiana, Mississippi and Alabama, and dumped 8 to 12 inches of rain along its track. Importantly, Katrina caused major storm surge flooding 25 to 28 feet above normal tide level along parts of the Mississippi coast, and storm surge flooding of 10 to 20 feet above normal tide levels along the southeastern Louisiana coast, according to the National Weather Service.

Ida, meanwhile, made landfall around midday Sunday as a Category 4 hurricane with winds of 150 mph near Port Fourchon, the NHC said. Ida had rapidly strengthened in the 24 hours leading up to landfall but was smaller in size than Katrina, and hurricane-force winds stretched only up to 45 miles from its center.

The two storms also differ in the path they took through Louisiana. Ida first made landfall at Port Fourchon, about 40 miles west-southwest of Buras, where Katrina first hit. Ida then moved into Louisiana west of New Orleans, while Katrina pushed east of the city in 2005.

Hurricanes spin in a counter-clockwise direction, and the eastern side of a hurricane has the strongest winds, so New Orleans experienced each storm differently. In 2005, Katrina passed east of New Orleans and Lake Pontchartrain, so its winds pushed water from the lake south into the city, causing more flooding.

This weekend, Ida passed to the west of the city, bringing stronger winds to New Orleans but also pushing the lake’s water away from the city.

“I think that we’re going to see the wind damage (with Ida) could be worse than Katrina,” CNN meteorologist Judson Jones said.

The biggest difference between these two storms is that New Orleans and its vital levee system has been remade in the intervening years.

New Orleans sits partly below sea level south of Lake Pontchartrain and is already vulnerable to flooding. A complex system of levees, pumps, canals and floodwalls run by the US Army Corps of Engineers protect it from regular flooding.
Katrina was so catastrophic primarily because the very high storm surge overtopped the levee system in Orleans and St. Bernard parishes, leading to levee failures and breaches. Most of the breaches were due to erosion from overtopping, but a few breaches occurred before the waters even reached the top of the floodwalls, the NHC said in a post-storm analysis.

The failure of the levee system created extensive flooding and destroyed much of the city.

“Overall, about 80% of the city of New Orleans flooded, to varying depths up to about 20 ft, within a day or so after landfall of the eye,” the NHC said.

Since then, the levee and pump system has been revamped to protect against another such failure.

It remains early, but as of midday Monday, the rebuilt levees have largely worked as designed. The Southeast Louisiana Flood Protection Authority East said that its levees held and were not overtopped during Hurricane Ida. “There have been no issues with our pumps,” the authority said. The New Orleans Flood Protection Authority also said the levee system functioned as designed.

Jefferson Parish assessor Tom Capella, who was chairman of the Jefferson Parish council in 2005 and remembers Katrina’s devastation, said he had not heard of any such widespread flooding in the parish on Monday.

“As we sit here, if you’re looking for the good news, the levees held,” he said. “I’m looking out my window and there are shingles down, but I don’t see the complete and utter devastation of 6 feet of water in people’s houses like we had for Katrina.”

Louisiana Gov. John Bel Edwards told MSNBC on Monday that clean up from Hurricane Ida will take a while, but the levee “performed extremely well.”

“If we had to deal with a failed levee system this morning, it would be completely unimaginable and thank goodness that is not what we are dealing with today,” he said.

“This is a different city than it was August 28, 2005, in terms of infrastructure and safety,” he said at a news conference.

Green called the city’s levee system “an unprecedentedly powerful protection for the city,” which has three lines of defense: the coast, the wetlands and the levee system.

“I think from that perspective, we need to be comfortable and we need to know that we’ll be in a much better place than we were 16 years ago,” Green said.

“That said, if we have 10 to 20 inches of rain over an abbreviated period of time, we will see flooding. We don’t know at this moment — we see 15 to 20 inches over 48 hours or less, and we can handle it, depending on the event.”

The power grid and water systems

Ida has not caused a catastrophic levee failure, but like Katrina, it still has caused severe damage to the region’s power grid and water systems.

In particular, Ida had knocked out electricity for more than a million customers as of midday Monday, according to Poweroutage.US, a site that tracks outages. New Orleans City Council Member Joe Giarrusso said there are eight transmission lines into New Orleans and Jefferson Parish and all eight have been knocked out.

Entergy Louisiana, the company that provides power to 1.1 million customers in Louisiana, said it will likely take days to determine the damage and “far longer” to restore electrical transmission.

“The most dangerous part of a storm is often just after it has passed,” Entergy said, because “downed power lines may still be energized.”

The outages have also led to water issues, the Sewage and Water Board of New Orleans said Sunday. The board asked residents to limit water usage and said it is “experiencing challenges” keeping up with demand.

Capella, the Jefferson County assessor, said he’s concerned that Ida knocked out power and has impacted the water treatment system. “It is clearly significant damage to the power grids and more importantly to the water system right now,” he said Monday.

Ida also arrived during the Covid-19 pandemic, adding another variable to the recovery efforts.

Back in 2005, Katrina caused widespread power outages and left about three million people without electricity, including some for several weeks, according to the NHC. The storm also displaced more than a million people in the Gulf region.
The lack of power and water infamously created horrific conditions at a flooded Memorial Medical Center, where 45 bodies were eventually found. The total damage from Katrina was estimated to be $125 billion (or $176.3 billion in 2021 dollars), according to the National Oceanic and Atmospheric Administration.

In addition, cell service was down for a large swath of the region both during Katrina and in Ida.

“The communications here are similar to what it was after Katrina,” Slidell Police Chief Randy Fandal said Monday. “The damages are not the same as Katrina but as far as the operations, communications, all cell phones, none of the cell phones are working, phone lines are not working, we have very limited communications ourselves.”