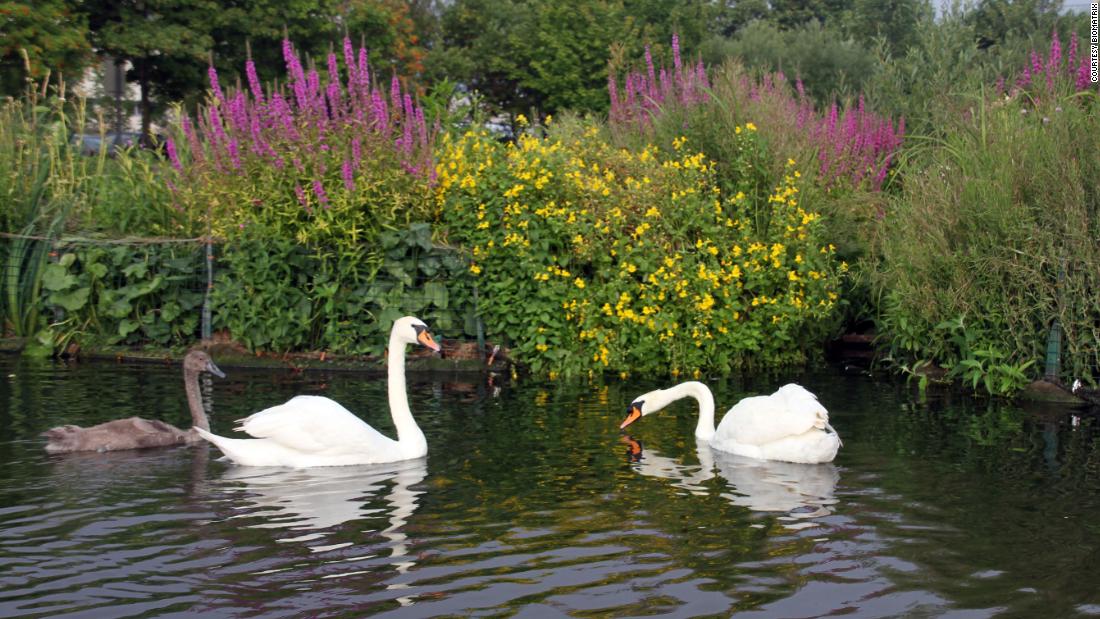 After a year and a half of highly restricted movement, many people have been confined to the gray spaces of the inner city with little opportunity to escape to the countryside. A report published in April found that frequent visits to nature improved psychological well-being and reduced mental distress. Now more than ever the need for relaxing green spaces in cities is clear.
Biomatrix Water, a biological technology company based in Scotland, says it has developed a solution using a system of floating modular plant platforms that green and clean urban waterways.

The plants above the surface offer vital habitats for urban fauna and improve air quality, while below the water flourishes a micro-wilderness of submerged roots where fish can thrive, and communities of microorganisms break down harmful substances — filtering pollution from the water like an artificial wetland.

Biomatrix Water was founded in 2008 by Lisa Shaw and Galen Fulford. Shaw grew up talking about sewage over dinner, as her father engineered climate-friendly, chemical-free wastewater treatment solutions.

Working on river-cleaning projects in India and the Philippines, Shaw and Fulford were struck by the water pollution and lack of “adequate wastewater treatment,” Shaw says.

In a river in Chennai, India, Biomatrix Water introduced an experimental island system to treat raw sewage in situ. “We put a big liner underneath the floating ecosystem so that the water could be held within the ecosystem,” Shaw tells CNN, where it would be stored for a matter of days while undergoing treatment. The project uses solar-powered aeration to accelerate the water treatment process.

The impact of this project proved to be further reaching than sewage treatment alone. With the transformation of the river through the introduction of the plant islands, native species of plants and animals started to return to the waterway, and the lives of the communities on the riverside were transformed, too.

After that success, Shaw and Fulford made it their mission to restore greenery and life to waterways. In 2019 they launched the “Living Water Cities” campaign, which aims to turn urban rivers and canals into ecological corridors.

“There’s a real need to have more green space in the cities and more habitat for birds or for pollinators, for fish,” says Shaw. The islands reinvigorate tired urban waterways, providing shelter for insects, fish and reptiles, and essential nesting grounds for aquatic birds.

Wally Gargett lives near Killingworth Lake in Newcastle upon Tyne, northern England. After a life-changing accident, Gargett struggled with depression. He tells CNN that the floating ecosystems Biomatrix introduced into Killingworth Lake greatly improved his quality of life.

“It’s so tranquil down there just watching each season changing color,” he says. “Even when the islands are frozen over it’s really beautiful to look at.”

“There are great crested grebes, they’re absolutely beautiful with little chicks on their backs,” Gargett adds. “And then you’ve got the swans, they’ve just had signets and there’s been a couple of geese with their signets and it’s just really gorgeous to watch.”

Gargett says a community of nature lovers has developed around these islands. “There weren’t many people that came to the lake before,” he says. “Before the ecosystems were in there it was just boring, just nothing. It’s really opened up Killingworth, just having the islands in.”

Shaw says a large part of their work is inspiring residents to love their neglected waterways. “It’s creating that personal connection and sense of wanting to steward and care for their local waterway and the environment,” she says.

She recalls a project to revitalize a heavily polluted canal system in Manila, Philippines, where years later the water is still clean and clear.

“There’s a whole community that live around the canals there,” says Shaw. “It’s lovely to see people continuing to care for the canals, to litter-pick. They feel like they can take responsibility for their local waterways.”

Biomatrix Water has installed floating islands throughout Europe, Asia and the Americas. The platforms are commercially available, while other projects are funded by partners including city councils and environmental charities. Last year, a series of projects Shaw and Fulford completed along the Rochdale canal in Manchester, in collaboration with the Canal and River Trust, won a Green Flag award — an international accreditation for well-managed and accessible green spaces.

At the end of July, Biomatrix Water installed a new project at the Royal Docks in London. The project includes floating walkways alongside plant platforms, creating a new space for locals to be within nature in the middle of the city.

Shaw tells CNN they have seen urban waterways completely transformed. “You see people sitting along the banks and just enjoying the beauty of it,” she says. “We put in the habitat, and then life can take hold.”