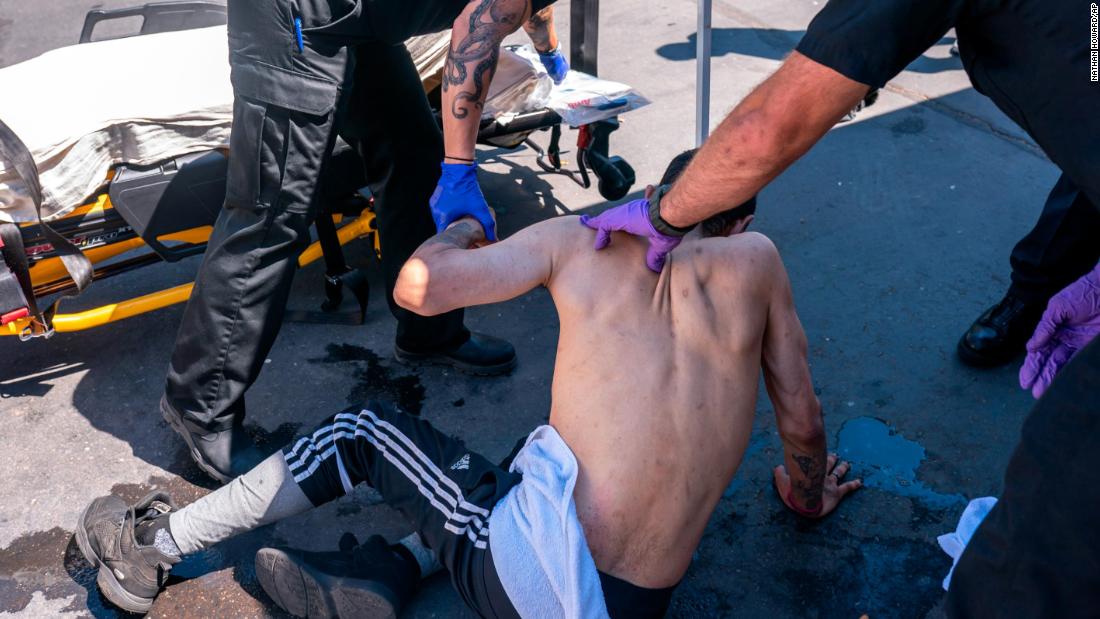 The compounding consequences of extreme heat don’t fall equally across communities. A recent study from the University of California, San Diego, found that low-income neighborhoods and communities with high Black, Hispanic and Asian populations experience significantly more heat than wealthier and predominantly white neighborhoods.
It reflects an earlier study that traces the legacy of neighborhood redlining, the government-sanctioned effort in the 1930s to segregate people of color by denying them housing loans and insurance. While redlining was banned in the late 1960s, remnants of the discriminatory practice are still apparent.

The research analyzed 108 cities in the United States and found that 94% of historically redlined neighborhoods are disproportionately hotter than other areas in the same city.

Redlined neighborhoods typically suffer the most from the urban heat island effect, according to the study, in which some urban areas can be up to 20 degrees hotter than neighborhoods just a few blocks away. Areas with a lot of asphalt, buildings and freeways absorb more of the sun’s heat than areas with parks, rivers and tree-lined streets.

Vivek Shandas, lead author of the redlining study and professor of climate adaptation and urban policy at Portland State University, said in addition to historic planning policies, the materials used to construct buildings also play a huge role in amplifying the most severe effects of extreme heat, particularly in low-income apartment complexes.

“What we end up seeing, as these higher density buildings are made of materials that are often able to withstand a heavier load from the multiple floors, is that they’re made out of concrete and steel, which amplifies heat,” Shandas previously told CNN. “So not only do we have historic planning policies that are creating a distribution of heat that’s inequitable, we’re also seeing the kinds of buildings that are going into historically disinvested neighborhoods are those types of buildings that retain the sun’s solar radiation, and then amplify it.”

The effect is striking on the walk from Manhattan’s Central Park to East Harlem, says Sonal Jessel, director of policy at the Harlem-based nonprofit WE ACT for Environmental Justice.

The trees that dot the wealthy and predominantly white Upper East Side neighborhood begin to disappear, Jessel says. In contrast, East Harlem, a diverse and historically marginalized neighborhood, is surrounded by freeways and streets, has less tree cover and more industry.

“Ultimately, I describe extreme heat as such a risk-multiplier,” Jessel told CNN. “It’s not an issue that exists in a vacuum at all, and lower-income communities or communities of color bear the brunt of all these different hardships.”

Portland, Oregon, and Seattle, two major cities that got scorched by the June heat wave, rank first and third, respectively, among cities with the highest proportion of households without air conditioning, according to a US Census Bureau survey of 25 major metropolitan areas. Experts say those least likely to have air conditioning are the people who will endure the worst heat — historically underserved communities.

“And unfortunately, we’re not well prepared, just generally speaking in the Pacific Northwest, for heat,” Shandas said. “That’s where the human side of it comes up, whether people are recognizing that they’re actually experiencing some level of heat stress and it might be an unfamiliar experience for them.”

June Spector, a professor of environmental and occupational health sciences at the University of Washington, Seattle, said heat exhaustion is one of the most common heat-related illnesses, yet many remain unaware of its symptoms.

“You haven’t quite gotten to that point where the core body temperature has gone up, but you feel nauseous, have a headache, you feel very fatigued, and you’re probably somewhat dehydrated if you’ve been in a really hot environment,” Spector told CNN. “Having that awareness is really key because you don’t want to not treat that or not address that before it gets more serious.”

Some cities are already taking steps to tackle the ripple effects of extreme heat. In Chicago and Philadelphia, city governments are offering financial incentives to install green roofs to cool cities and combat urban heat. In Dallas, urban green spaces are set to be built in some of the most heat-sensitive areas of the city. In Los Angeles, some streets are being painted with a grayish-white coating to prevent absorbing energy from the sun, and instead reflecting it back.

In New York, Jessel has been overseeing a flurry of sustainable and equitable heat action plans, implementing an initiative that focuses on heat, health and equity. A big part of that initiative is ensuring low-income renters are well equipped to deal with extreme heat while simultaneously mitigating climate change through energy-efficient buildings.

Experts say climate change-fueled disasters are becoming a public health issue. Some, like extreme heat, are turning into mass casualty events. Experts such as Jessel and Spector say such plans need to be equitable to avoid the most pernicious public health impacts.

“It’s really up to us to figure out how can we mitigate that and kind of halt climate change if possible,” Spector said, “but really adapt to it and figure out how we can make our communities safer for everyone.”