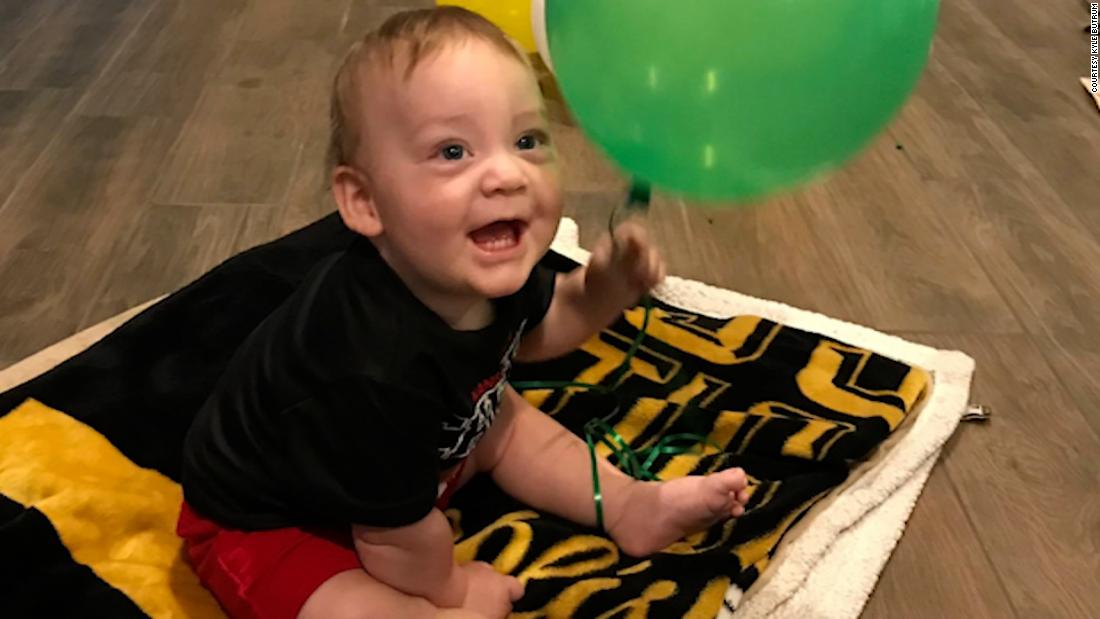 When Carter Butrum started showing cold-like symptoms last week, his parents got him tested for Covid-19. That test came back negative, but when the symptoms worsened Carter was tested again. This time, he tested positive.

Now the baby is in the hospital and has been put on oxygen. Carter’s mother is with him, but due to the hospital’s Covid-19 mitigation measures, his father, Kyle, and sister Kayden are unable to visit.

Kyle Butrum told CNN’s John Berman Friday that he’s heard from many people asking how they can help, and he appreciates that, calling it a “very nice gesture.”

“But the gravity of the situation is there’s nothing you can do to help me,” he told CNN’s John Berman Friday morning. “I can’t go to the hospital, I can’t even help him.”

“The only thing you can do to prevent someone else from doing this is to get your vaccine so that another child doesn’t have to do this, and another family doesn’t have to send their kid away,” Butrum said, crying. “So another father doesn’t have to stand at the back of an ambulance and wonder if that’s the last time you’re going to see your son.”

Covid-19 hospitalizations are surging once again amid climbing infections and low vaccination rates. But now, patients tend to be younger than they were in earlier surges. Children account for a larger share of hospitalizations now than they did in January, data from the US Centers for Disease Control and Prevention shows, and hospitalization rates among children below the age of 18 are hovering around the record high.

Federal data shows the number of children hospitalized with Covid-19 in several states like Georgia, Tennessee, South Carolina and Louisiana has doubled over the past week.

Children under the age of 12 like Carter are still ineligible for a Covid-19 vaccine, so vaccinating the people around them is the best way to protect them.

Carter’s older sister Kayden described her brother as a happy baby who doesn’t often cry. “He always wants to play,” she said. “He likes going on walks. He’s very energetic, so to see him very exhausted hurts me a lot.”

Asked about Carter’s condition, Butrum said, “It’s been really touch and go,” though things have improved in the last 24 hours. The baby is still on oxygen and his doctors are treating the buildup in his lungs, Butrum said. On top of that, his fever has been kept down, Butrum said, calling it “a good sign.”

“Really what’s hurting him the most at this point outside the oxygen is the exhaustion,” he said. “It’s so difficult for anyone really when you can’t sleep, but especially someone that doesn’t understand the gravity of the situation.”