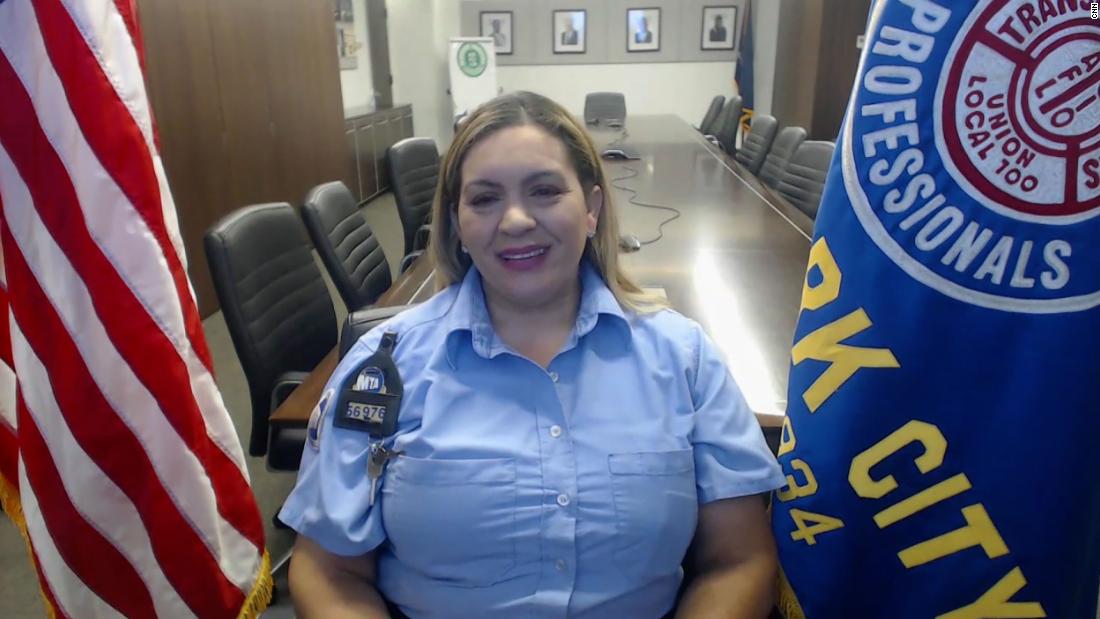 And she was so focused on forcing the bus to safety, she says, she didn’t notice her passengers were standing on their seats as water rushed in.

Passengers and politicians alike have hailed Amonte as heroic after dramatic video showed her driving through feet of water — even as her three riders keenly tried to avoid the collecting water inside.

“I (was) shaking. I was really, really nervous, because I didn’t know what was going to happen. Was the bus going to break down?” Amonte, a transit worker for eight years, told CNN’s Kate Bolduan on Friday.

It started like this: Amonte had picked up some passengers near Flushing Meadows in Queens on Wednesday night.

Among them were Joe English and his girlfriend, who decided to leave the US Open tennis tournament because they’d seen a flood warning alert.

At first, the drive was fine. But when the bus reached Queens Boulevard, the bus suddenly was in deep water.

“It looked like, genuinely, a river,” English recalled to CNN’s Victor Blackwell and Alisyn Camerota.

Amonte figured she had only one good option.

“I couldn’t go back. I couldn’t stay there,” Amonte said. “The only decision I could take in the moment was (to) go over it, past Queens Boulevard.”

English recorded video of what happened next, and posted it to Twitter.

As Amonte drove the bus through Queens Boulevard, water came inside, sloshing up close to seat level.

The video shows two women standing on the seats, one of whom looks worryingly into the camera and shakes her head.

The bus soon inches through to a non-flooded road.

“Good work!” English shouts, as someone else cheers and claps.

It was only then, Amonte recalled to CNN, that she saw “all of the water coming from the bus.”

“I was like, ‘Oh, my God.’ I didn’t even know, because I was concentrating on the road,” Amonte said. “(I) didn’t even see my passengers (were) over the seat.”

“She managed to plot a path through floodwaters at a time when .. other cars were being abandoned,” he said.

The video got plenty of public attention, and by Thursday, New York Gov. Kathy Hochul stopped at a Queens bus depot to thank Amonte.

“Rosa did something that is absolutely, unbelievably heroic,” Hochul told reporters gathered there.

“She drove passengers through 3 to 4 feet of water. I watched that video. The water … was in the bus. People are literally standing on their seats to make sure that they did not drown inside a bus,” Hochul said.

“But she didn’t pull over and say, ‘I’m out of here, I’m going home.’ She stood there. She drove; she went through the night and did what it took to get people there safely.”

Amonte told reporters there that “the only thing in that moment was to take passengers to a safe place.”

“It is really nice to hear … some ‘thank you’ for all of the job we’re doing every single day, for everybody in New York.”