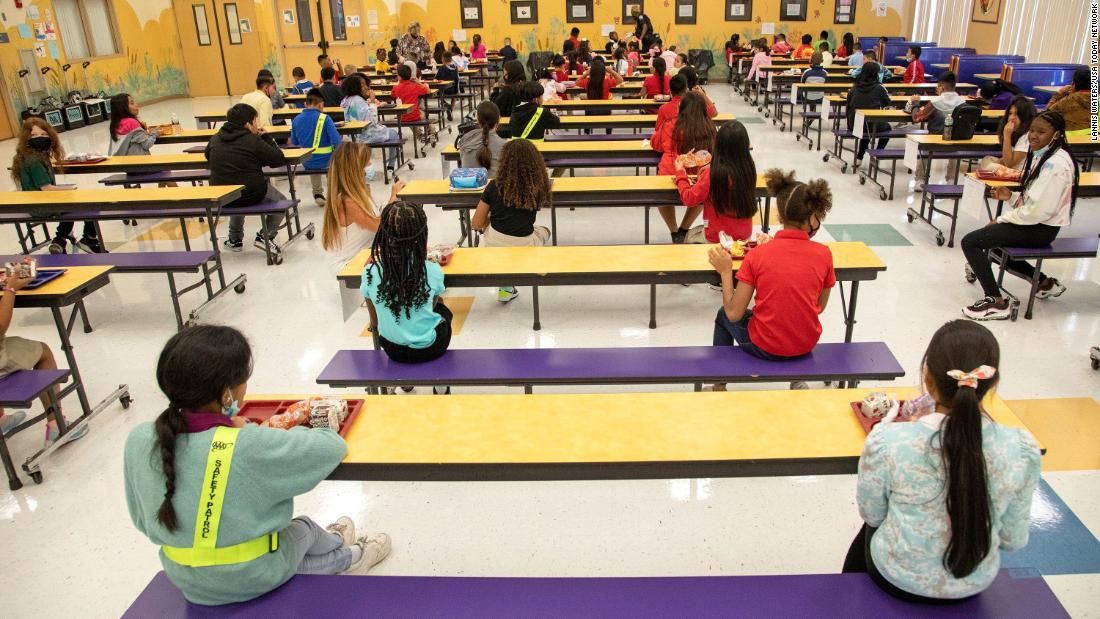 But children under 12 are still not eligible for vaccines, and for those newly vaccinated, it takes about six weeks from the first dose to take full effect, many children could still be vulnerable when they start the new school year.

“My concerns are deep and I’m very concerned,” President Joe Biden said when asked about school-aged children returning to the classroom and whether schools might not be able to stay open. “I also understand that the reason children are becoming infected is because, in most cases, they live in low-vaccination rate states and communities and they’re getting it from unvaccinated adults. That’s what’s happening. And so my plea is that for those not vaccinated, think about it.”

Whereas the elderly were once considered the population most vulnerable to the virus, the age constraints around vaccinations have left children most at risk now, CNN Medical Analyst Dr. Jonathan Reiner told CNN’s Don Lemon.

When one layer is removed, like when social distancing is foregone so students can gather in a classroom, the other layers of virus protection become even more crucial, she said. Those layers include at least a three-ply surgical mask, improved ventilation, vaccination and testing.

“Putting all that together is how we can get kids back in school safely,” Wen said.

The clock is ticking to authorize vaccines for children, expert says

Currently, Covid-19 vaccines are only authorized for people 12 and older, but many experts and officials have called for the efforts to approve vaccines for younger children to be expedited before more children are infected.

“I think the clock is ticking. As we move to late fall and early winter, you want a vaccine for young children,” Dr. Paul Offit, a vaccine adviser to the US Food and Drug Administration told CNN’s Erica Hill. “I certainly hope we have one in place by then, because children need this.”

The FDA understands the public health impact of having a vaccine for young children but wants to see the necessary data before making a decision, said Offit, director of the Vaccine Education Center at the Children’s Hospital of Philadelphia.

In the meantime, Offit noted that children who are still too young to receive the vaccine are relying on the eligible adults and adolescents around them to help protect them by getting vaccinated — which many have yet to do.

“I think as adults, we’ve really let our children down here,” said Offit.

Ahead of the new school year, mandates are under debate

Until vaccines can be administered to younger kids, some officials are hoping that masks will help decrease the spread of the virus.

In Kentucky, Gov. Andy Beshear announced Tuesday that masks will be required in K-12 schools, pre-K and childcare.

“We are to the point where we cannot allow our kids to go into these buildings unprotected, unvaccinated and face this Delta variant,” Beshear said. “So, I’m going to have the courage to do what I know is right to protect our children.”

Asked about what schools should do when students don’t wear masks, Pritzker said, “Well, school districts have been enforcing dress codes for many, many years and so they’re expected simply to do the same thing they’ve been doing literally for decades.”

“When school districts try to do the right thing, and he overrules them, he’s both overruling conservative principles of local control, but more importantly, he’s putting kids at real risk,” Slavitt told CNN.

Already, the state is suffering under surging Covid-19 cases. In recent days, the federal government has sent 200 of ventilators to Florida as the state sees some of the highest hospitalization rates per capita in the nation, a health administration official confirmed.

Impacts felt in hospitals across the country

The impacts of the spread of the variant can be seen in hospitals around the US.

At Children’s Hospital New Orleans, 18 children are hospitalized with Covid-19 and six are in the pediatric ICU. The number of children fighting the disease is unlike anything the hospital has seen at any other time in the pandemic, nurse Kendal Jaffe told CNN’s Nick Valencia.

“Over the last year, we hadn’t seen as many kids get acute Covid lung disease as much as we are seeing now,” she said. “The Delta variant is definitely hitting them a lot harder, a lot faster than we’d seen in the past.”

One patient, Nelson, 17, is struggling to breathe and his parents thought he was going to die when they brought him in. Elsewhere in the hospital, a girl who hasn’t even celebrated her second birthday is in the ICU.

The North Carolina Department of Health and Human Services on Tuesday announced that the state had experienced its largest single-day jump in ICU admissions since the beginning of the pandemic ,and that weekly Covid-19 hospitalizations among residents ages 20 to 49 are now at an all-time high.

Arkansas Gov. Asa Hutchinson said Tuesday that the state’s hospitals are under stress.

“I keep looking for a breaking point where we might start going down again, and even though there’s been some national predictions on that, we just don’t see it in the data yet. You can see that we continue to increase, week after week, in our cases,” he said.