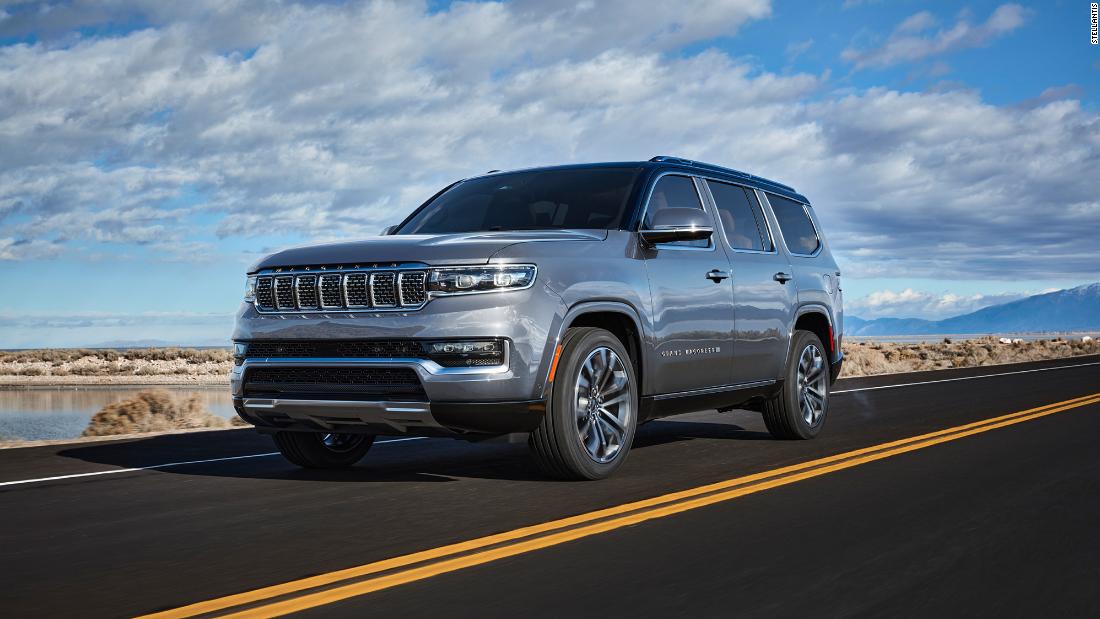 This level of excitement won’t last long — the novelty will wear off once people have seen a few — but it’s a strong indication of interest and, clearly, there’s a whole lot.

I was driving the luxuriously equipped Grand Wagoneer, with a total price of more than $100,000, toward an off-road course on private land.

I couldn’t help but think that few owners of Grand Wagoneers (or the less luxurious Wagoneer, for that matter) would ever take their expensive full-size SUVs anywhere near actual rocks. But, since it’s a Jeep, off-road capabilities must be displayed. Just as with sports cars, even though few will approach their highest speeds, owners like to know those capabilities do actually exist.

Unlike the familiar Jeep Cherokee and Grand Cherokee, two entirely distinct models with very little in common beyond the name — which a native American tribe would like them to stop using — the Wagoneer and Grand Wagoneer are two versions of the same big three-row SUV. As its first name implies, the Grand Wagoneer is more opulent, with nicer interior materials and more advanced technology options.

The Grand Wagoneer has a starting price near $90,000, a sizable jump up from the $60,000 for the two-wheel drive base version of the Wagoneer. The lowest-price version won’t be available until later, though. The Wagoneer that’s currently on the market costs nearly $70,000.

The Grand Wagoneer I test drove, besides having a nicely appointed interior with aluminum trim, had a high-end McIntosh stereo, seats that massaged in multiple ways and a variety of computer assistance features for the driver.

If it were a contest, the Grand Wagoneer makes a strong play for leader in total touchscreen area inside an SUV. There was even a screen just for the front passenger, one each for rear passengers and one in the center between the second row passengers.

The touchscreen user interfaces are clear, easy to use and simple to customize. The front passenger’s screen allows them to safely look up navigation destinations while underway and send them to the big central screen for the driver. (The passenger can also entertain themselves with streaming videos, just like the backseat riders, while the driver’s view is blocked by a special screen coating.)

What impressed me the most about the Grand Wagoneer was how satisfying it was to drive on paved roads where it will, no doubt, spend most of its time. It felt controlled, almost like a large car rather than a big, lumbering truck. Even the newest versions of competitors, like the Cadillac Escalade and Lincoln Navigator, feel ponderous by comparison. Big European luxry SUVs, like the BMW X7 and Mercedes-Benz GLS, are more refined but make you feel very isolated from your surroundings and the road, which is nice if that’s your thing. The Grand Wagoneer offers a pleasant middle. It rides quietly and smoothly but still lets you feel fully in control without big, barge-like body movements.

The Grand Wagoneer is available with driving assistance technologies that help it hold its lane on the highway and maintain a set speed in traffic without driving into vehicles ahead of it. Most luxury vehicles these days come with these Tesla Autopilot-like technologies, including even many non-luxury brands, like cars from Nissan and Subaru.

The Grand Wagoneer’s driving assistance system isn’t among the best, though. It didn’t hold its lane smoothly as it should, making the big SUV sometimes feel like a pinball in a chute and requiring frequent steering adjustments. A more advanced version of this technology will be available later which, like General Motors’ Super Cruise, will enable drivers to completely remove their hands from the steering wheel on selected highways.