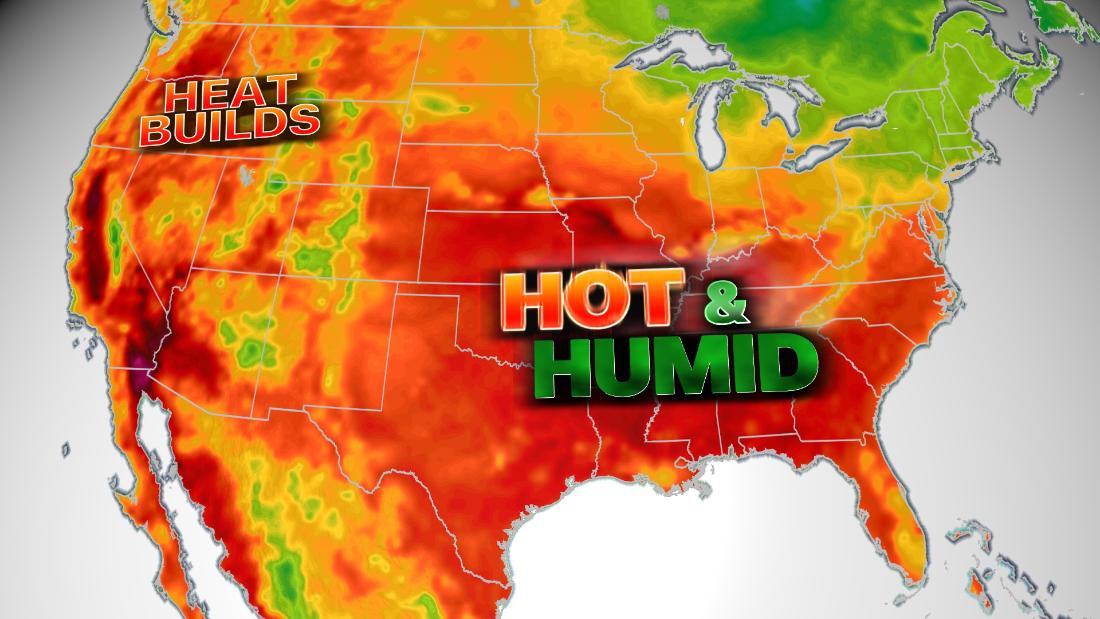 More than 70 million people were under heat alerts, including St Louis, Kansas City, Oklahoma City, Memphis, Nashville, New Orleans and Atlanta, where heat index values of 105° to 110° degrees are expected.

“Two areas across the lower forty-eight will have heat problems; there is an Excessive Heat Warning over parts of Oregon and the Middle Mississippi/Tennessee Valleys and adjacent regions, where temperatures will be above average,” said the Weather Prediction Center.

“Furthermore, Heat Advisories are currently in effect for portions of the Pacific Northwest/Northern California and over Middle/Lower Mississippi/Tennessee Valleys and adjacent Plains.”

“Hot and humid conditions will continue through the remainder of the week with afternoon temperatures in the middle 90s to around 100°F and heat indices up to 110°F to 115°F over consecutive days,” said the National Weather Service office in Jackson, Mississippi. “This is a prolonged heat wave.”

These high temperatures, with conditions feeling even hotter due to humidity, will be the same story for much of the central and southern US.

Dallas; Tulsa, Oklahoma; New Orleans and Atlanta could all see searing conditions throughout the weekend as the heat dome spreads over the South.

By Saturday, near triple digit heat will spread from Texas to South Carolina, with sweltering heat index values topping 105°.

A cold front drops through by Sunday night into the start of the week, bringing cooler, seasonal temperatures back to the region.

Heat returns to the Pacific Northwest

An unwelcome return of above-normal temperatures will impact Oregon, northern California, and parts of Washington and Idaho the next several days.

Heat advisories are in effect across the inland Northwest, as well as excessive heat warnings in southwestern Oregon, where temperatures could climb to 110 degrees.

Temperatures on Friday could near 100 degrees in Portland, well above the seasonal 70s in July.

“The good news is that we’re not expecting temperatures anywhere near what they were in our late June heat wave. Instead of temperatures in the 110s, we’re looking to get to mid to upper 90s for the most part, maybe just over 100 degrees in a couple spots for our valleys,” NWS Portland meteorologist Shawn Weagle said.
Along with the hot temperatures, fire danger is a concern for the region. Red-lag warnings in southern Oregon cover the area where the Bootleg Fire is located, currently the largest burning wildfire in the country, searing over 413,000 acres.

“One of the things that we’re a bit concerned about is the potential for lightning in the areas that are very dry this season because of the drought. The vegetation is very dry and receptive to starting a fire if lightning strikes,” said Weagle.

Isolated dry thunderstorms are possible in the area through Friday, bringing the threat for more lightning strikes to ignite wildfires in the drought-ridden area amid the elevated heat.

“Isolated to scattered mixed wet and dry thunderstorms are possible in the afternoon and evening across northern California, southern and eastern Oregon, northwest Nevada, central Idaho, and southwest Montana. Pyrocumulonimbus will be possible on any active fires in the vicinity of dry thunderstorms,” said the National Interagency Fire Center.

Pyrocumulus clouds have been prevalent in the fires burning across the Pacific Northwest this summer due to extreme fire behavior amid very dry and hot conditions.

These massive plumes of smoke happen when extremely hot wildfires create their own weather, which can include lightning, thunder and even tornadic rotations. They loft huge amounts of smoke high into the atmosphere, where it can be carried across the country.

Air quality alerts are in effect in Montana, Idaho, Wyoming and Colorado due to Western wildfire smoke creating polluted air.

“Wildfire smoke is made up of a variety of pollutants, including particulate matter and ozone, which can cause respiratory health effects,” said the NWS in Billings, Montana.

Hot temperatures through the end of the week and dry conditions will pose a risk for more extreme wildfire behavior and the potential for new fires to start.

Seasonal temperatures return by late weekend, when monsoon moisture moves into the region.

Heat can be deadly

The danger of heat stroke is “imminent” with prolonged outdoor activity in these hot and muggy conditions according to NWS Jackson.

“‘It’s not the heat, it’s the humidity.’ That’s a partly valid phrase you may have heard in the summer, but it’s actually both,” the National Weather Service said.

The heat index is an indicator of what the temperature feels like to the human body when the humidity and air temperature are both taken into account.

When it is hot out, our bodies create sweat that is evaporated, cooling us down. But when it is very humid, it is difficult for the moisture to evaporate, making it feel hotter and increasing the risk of heat stroke.

Heat is the number one cause of weather-related deaths in the US, and prolonged heat events elevate the danger, when overnight temperatures provide little relief.