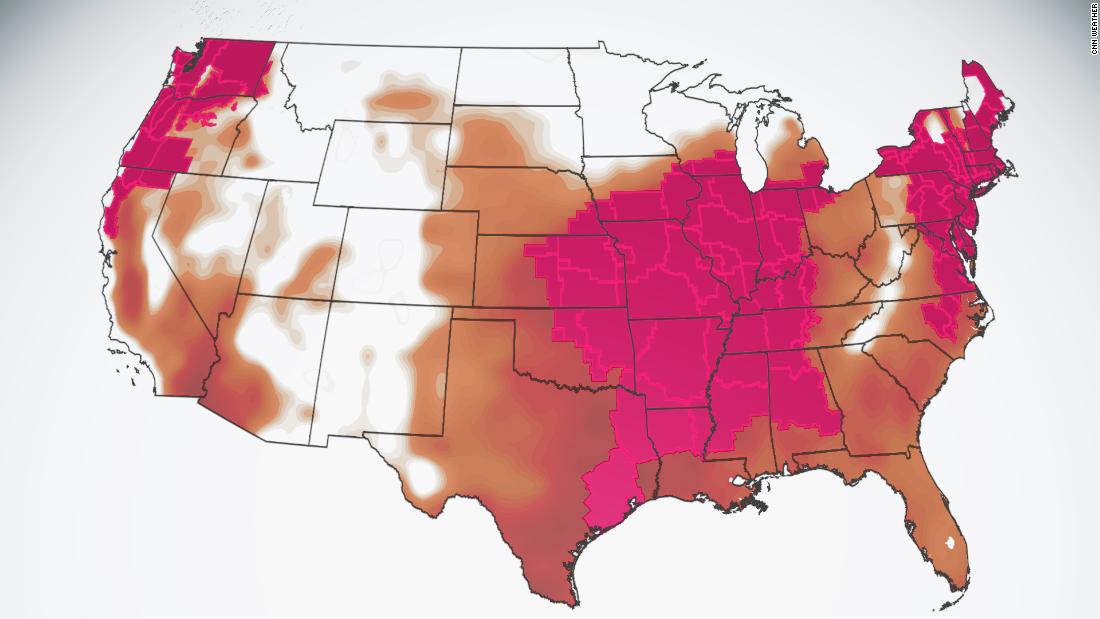 “‘The Heat Is On’ for much of the US mainland as sweltering temperatures span from sea to shining sea today and Thursday,” the Weather Prediction Center said early Wednesday.
Fifty million people are under excessive heat warnings, with major cities like New York, Philadelphia, St. Louis, Kansas City, Seattle and Portland, Oregon, included in this highest-level alert. Such warnings are issued within 12 hours of the onset of extremely dangerous heat conditions: when the maximum heat index — or “feels like” temperature — will be 105 degrees Fahrenheit or higher for at least two days and nighttime temperatures won’t drop below 75.

“Some parts of the I-95 corridor could reach 100 degrees Thursday afternoon with oppressive heat indices ranging between 105-110 degrees,” the prediction center said. The heat index factors in humidity with temperature.

Heat waves are getting hotter because of the climate crisis. With 2 degrees Celsius of global warming, the hottest temperatures would reach nearly 3 degrees Celsius (5 degrees Fahrenheit) higher than previous heat waves.

Pacific Northwest faces another round of heat

Across the West Coast, the heat will be building, especially in the Pacific Northwest. Temperatures there will soar 15 to 25 degrees Fahrenheit above normal.

“Temperatures on Thursday will even challenge some daily record highs in the Northeast and the Pacific Northwest,” the prediction center said.

Seattle will be in the mid- to upper 90s Thursday and Friday. Portland could even hit 100 degrees on Thursday and Friday. This will make for especially dangerous conditions across this region because many don’t have air conditioning.
It will be the second major heat wave the Pacific Northwest has faced this summer. In June, all-time record temperatures fell by the wayside as cities like Seattle soared to 108 degrees, while Portland baked past 116 degrees. Hundreds more emergency room visits for heat-related symptoms and deaths than usual were reported during the period.

Seattle’s record for the most consecutive days at 95 degrees or higher is four, and if this week’s forecast holds, it will reach five. In Seattle, climate records have been kept since 1894, but when it comes to August, 15 of the 31 days this month have a daily record that has been set in the past 12 years (2009-2020).

Scorching in the South and Midwest

The Mississippi River Valley will face temperatures in the upper 90s for the next several days, with heat indices feeling like 110 in some places. Places like Chicago, Houston, Memphis and Little Rock, Arkansas, are all under heat advisories.

Chicago will have highs around 90 on Wednesday and Thursday but feel closer to 100. Houston will also be sweltering in heat and humidity, with the heat index making temperatures feel like 110 the next two days.

Quite a few record warm lows could be broken across this region Thursday morning, too.

Along with the heat will come a chance of thunderstorms for portions of the Midwest. Another round of severe weather is forecast Wednesday, with a level 3 of 5 risk for Chicago and Milwaukee. A level 2 of 5 threat includes Detroit.

Around 500,000 customers remained without power across the Great Lakes region Wednesday morning, most of them in Michigan, where more than a quarter million were in the dark.