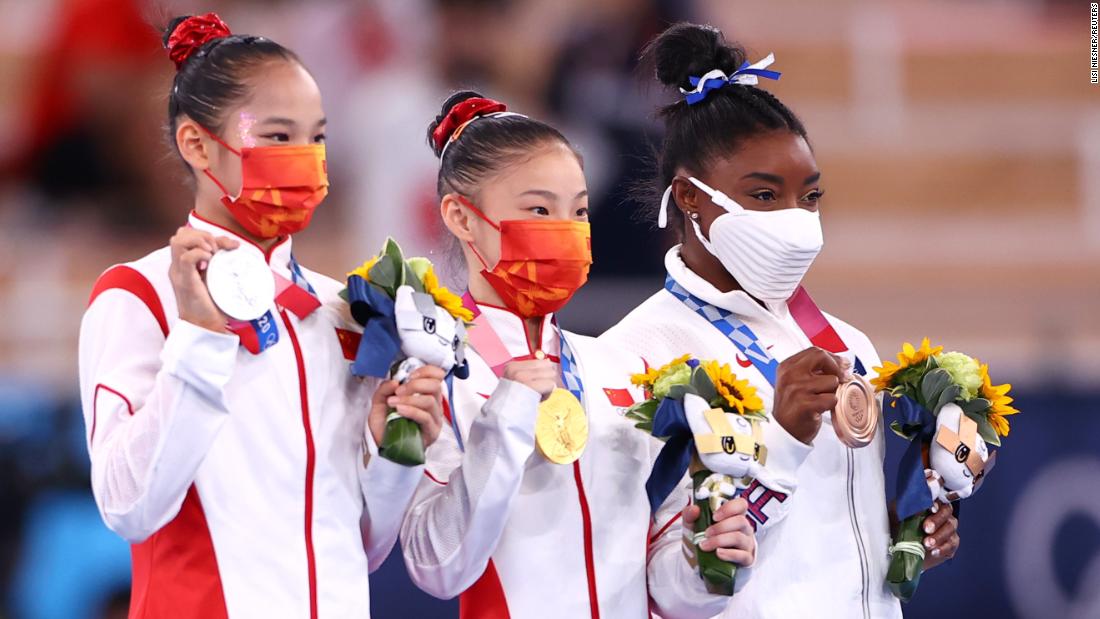 Biles’ psychological well-being has been the focus of attention since she withdrew from the women’s team final last week.

The 24-year-old then didn’t compete in four individual finals at the Tokyo Olympics — the all-around individual competition, the vault, the uneven bars and floor — but returned to great applause from her USA teammates seated in one corner of the Ariake Gymnastics Centre.

Tuesday’s final was the American’s last chance to claim a medal at Tokyo 2020 and she scored 14.000 for a clean and confident routine.

That score initially placed Biles second behind China’s Tang Xijing on 14.233, but the 16-year-old Guan, the top qualifier in the event and the last to perform her routine, moved into the gold medal position with a score of 14.633.

For Guan, who lists Biles as her sporting idol, and Tang, the gold and silver medals were their first at the Olympics.

“I never expected that I would get a medal,” said Guan. “My coach said: ‘This is your first time in the Olympics and no one knows you so just go in and do your best.’

“I actually started gymnastics much later than other people so I think this is a good result for me. Even though this competition is very tiring, I’m very happy with this result.”

Since withdrawing from the team final last week, Biles has spoken about experiencing “the twisties” — a phenomenon suffered by gymnasts that suddenly prevents them from performing certain twisting skills.

But Biles was all smiles after completing her beam routine in the final and waved enthusiastically to the crowd, some of whom responded with a standing ovation.

“It’s been a very long week, a very long five years. I didn’t expect to medal today, I just wanted to go out and do it for me, and that’s what I did,” said Biles.

“It definitely feels more special, this bronze, than the balance beam bronze at Rio. I will cherish it for a long time.”

Canada’s Ellie Black finished fourth with a score of 13.866, while Biles’ teammate Sunisa Lee, who won all-around gold and bronze in the uneven bars last week, was fifth.

The balance beam was the final event in the women’s artistic gymnastics program in Tokyo.