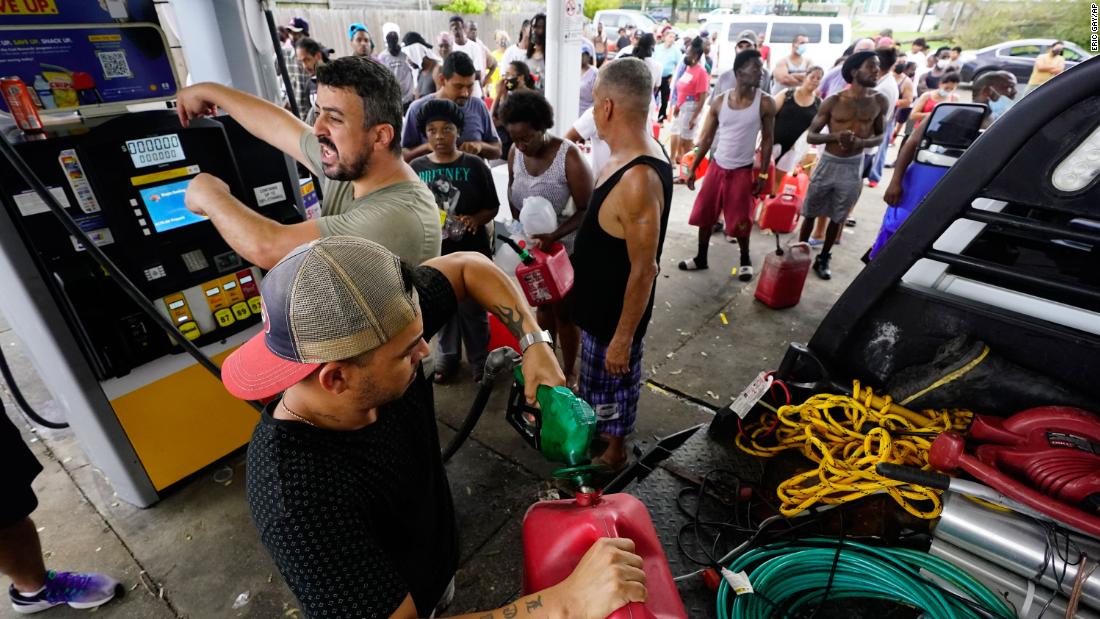 Access to gas continues to be one of Louisiana’s biggest needs following Hurricane Ida, Gov. John Bel Edwards said. Gas station outages are mounting in Louisiana’s two biggest cities, with a staggering 68.5% of the gas stations in Baton Rouge and 64.7% in New Orleans out of gas, according to outage reports compiled by GasBuddy.

Analysts said these gas station outages are being driven by a combination of spiking demand as people drive out of the region and complications supplying the fuel caused by power outages. Tanker truck drivers, for example, often can’t fill up if there is no power at terminal racks that dispense fuel at refineries.

Without power, many Louisiana residents are relying on gas-powered generators for electricity — and to stay cool: Heat advisories are in effect for southeast Louisiana, including Baton Rouge and New Orleans, where the heat index will top 105 degrees.

“We’re in the heat. We ain’t got no lights. It’s been almost like five days,” Myra Castro, a single mother in New Orleans, told CNN Thursday at a gas station where she said she’d waited two hours to fill her car, where she and her children have been sleeping.

Eric Mertz, a resident of St. Rose in St. Charles Parish, just west of New Orleans, told CNN he has no power, no air conditioning and no lights.

“I’m just wondering where the help is,” he said.

Biden to visit the state Friday amid federal relief effort

The Federal Emergency Management Agency has sent more than 1,100 employees to support the response to the storm in the region. The agency has also awarded nearly $93 million in individual assistance, officials said.

“I know initially we thought we were talking three to four weeks, you know, we’ll see where it goes from here, but things are moving along,” Wright said.

But much of the work relies on gas, and many families need to stock up to supply their generators. Some residents braved the dark and the heat to find fuel.

As the gas crisis worsens, the Biden administration is releasing 1.5 million barrels of crude oil from America’s emergency stockpile of oil.

This will “alleviate any logistical issues of moving crude oil within areas affected by Hurricane Ida to ensure the region has access to fuel as quickly as possible,” the Energy Department said in a statement.

The Environmental Protection Agency late Thursday announced it was issuing a second emergency fuel waiver for Louisiana and Mississippi to ease the supply crunch caused by the storm.
President Joe Biden is set to visit the state Friday to survey the damage and meet with state and local officials.

He estimated around 25% of homes had been catastrophically damaged, while another 30% to 40% have severe damage. Crews remain on the ground clearing roads, Chaisson said, and debris pickup should begin Friday.

The two shelters within the parish have been closed “due to limited power supply” and those residents have been relocated to Ascension Parish until further notice, Chaisson said.

“We are working with FEMA to try to figure out how do we shelter these people,” he said noting that “hotel rooms are scarce because a lot of the hotel rooms took damage as well.”

Among those confirmed dead in Louisiana and Mississippi are at least 5 who have apparently died in connection to carbon monoxide poisoning, leading officials to sound the alarm on the improper use of generators.

“Many people who haven’t used generators in the past are going and buying them from local warehouses and either keeping them too close to their home or inside of their home or inside of their garage,” Dr. Emily Nichols, director of the New Orleans EMS told CNN Friday. “And all of those things are dangerous and potentially fatal, and we’re seeing that as we respond to our calls.”

Separately, four nursing home residents who had been evacuated to a facility in Tangipahoa Parish ahead of the hurricane have died, the Louisiana Department of Health (LDH) reported on Thursday.

Three of the deaths have been classified as storm-related, according to LDH.

The Department of Health said it heard reports about “deteriorating conditions” at the facility after Hurricane Ida made landfall and inspectors were sent to visit the site on Tuesday, but were expelled from the property and kept from doing a full assessment, according to LDH.

After that, health department officials began moving people out of the warehouse, starting with the most vulnerable. “In a little over 24 hours, all 843 residents were removed from the facility,” Edwards said.

Authorities will investigate if the facilities failed to keep residents safe, if officials were kept from checking in on them and what the conditions of the facility were, Edwards said.

“For our customers, whether you’re in Louisiana or Mississippi or other parts of our service territory, and you’ve been impacted by the storm, we see you,” Entergy’s Group President for Utility Operations Rod West told CNN Friday. “We hear the voices of those customers because we’re there too, who are hot, who are frustrated.”

“We want you to know that we’re not going to stop working until the last person is brought back into service,” West said.

Entergy did not provide a timeline for much of the southernmost region, where parishes like Terrebonne, Lafourche, Jefferson and Plaquemines are still dealing with high water levels and impassable roads.

But, the statement said, “Specific restoration times down to the local area, including the coast and areas in the immediate path of the storm, are continuing to be developed and will be released in the coming days.”