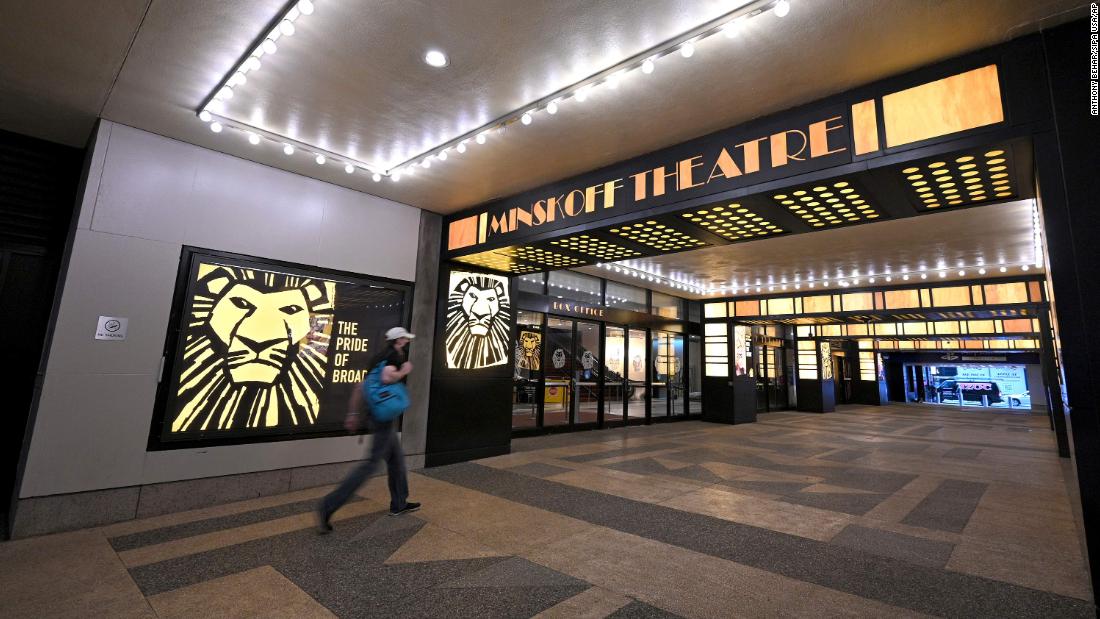 The end of Labor Day Weekend always has a “Back to School” feel. So this special edition of our media digest is a preview of the week ahead and the entire season ahead in media. This is some of what fall 2021 has in store…

Wednesday: New York Fashion Week will kick off “with models strutting the runways in real life and a number of in-person, vaccine-required bashes,” Page Six notes
Wednesday: Opening statements are set to begin in the trial of Elizabeth Holmes. The trial is expected to take roughly 13 weeks
Wednesday: A new class will be inducted into the National Baseball Hall of Fame

Wednesday after the close: Meme stock GameStop will report earnings

Thursday night: The NFL season will open with Cowboys vs. Buccaneers on NBC
Friday: The meteorological peak of hurricane season

Saturday: The 20th anniversary of 9/11. This is the new cover of The New Yorker:

— Ellie Kaufman of CNN, Catherine Herridge of CBS and other reporters are at Guantanamo Bay as pretrial hearings for alleged 9/11 plotters are set to resume on Tuesday… (CNN)
— On Tuesday President Biden is slated to visit NYC and Manville, NJ to survey Ida flood damage… (NYT)
— NBC is previewing this as a “US TV exclusive:” The first interview with Bill Cosby accuser Andrea Constand since Cosby was released from prison. Kate Snow’s interview will air on “Today” and “Nightly News…” (Twitter)

I made list to amuse some CNN colleagues, and they wound up helping me fill in the rest of the letters. Thank you to Megan Thomas, Kerry Flynn, Lisa Respers France, and Brian Lowry for the assists! So here it is, the fall from A to Z. We elaborate on almost all the references down below, so keep scrolling…

A is for Apple’s next event

B is for Broadway reopening

C is for Code Conference returning

D is for “Dancing With the Stars”

E is for the Emmys

G is for a government shutdown, potentially

I is for information disorder

J is for “Julia,” a Julia Child documentary due in November

L is for Larry Elder, governor?

M is for “Midnight Mass”

O is for Oscar Isaac

R is for “Red Notice,” due out in November

S is for “Succession,” coming back in October

T is for the Tony Awards

U is for universal frustration with the state of the pandemic

V is for the VMAs this weekend

W is for the WGAE election

X is for NetfliX (this one was hard)

Z is for the Zombie Avengers episode of “What If…?” that’s debuting this week

— Which media giants will make the most streaming progress this fall? HBO Max just added all eight “Harry Potter” films. ViacomCBS’s Paramount+ is continuing to ramp up content and Discovery+ is continuing its international rollout…
— SPAC standstill? CNBC’s Alex Sherman reports that “the fall of the SPAC market has digital media companies in disagreement about best path forward…”

— Advertising Week will return to NYC with a “hybrid event” Oct. 18-21…
— Is Axios still up for sale? Will Warner agree to sell TMZ to Fox? What will Red Ventures buy next?

This fall in tech

— “The Apple event is near,” Mark Gurman wrote in his Bloomberg column. “Look for Apple’s iPhone 13 and Apple Watch Series 7 event to be announced as early as this week
— The Code Conference is in person in Beverly Hills Sept. 27-29. Agenda here
— As Margaret Harding McGill wrote for Axios, antitrust scrutiny of tech giants “will only intensify this fall.” Here’s her fall season preview
— Facebook has until Oct. 4 to respond to the FTC’s complaint
— Facebook Connect is virtual on Oct. 28 this year
— Will Amazon launch its own TV this fall?

Political headlines in the weeks ahead

— Congressional committees will “meet this week” to start “formally drafting Democrats’ ambitious social policy plan,” NYT’s Jonathan Weisman writes…
— Punchbowl: “There are 24 days until the federal government runs out of money. Will an all Democratic-run Washington allow the government to shut down?” More from Jake Sherman here…
— Can Gavin Newsom fend off Larry Elder and 45 other candidates? The recall date is Sept. 14…
— Some Trump fans are planning another MAGA rally in DC on Sept. 18…
— Will Nick Kristof run for governor in Oregon?

Bob Woodward and Robert Costa’s book about Trump’s final months and Biden’s first months will hit on Sept. 21. Expect the first leaks about a week beforehand. “Details are locked down as usual, but publisher Jonathan Karp promises ‘it will be newsworthy on an international scale,'” the LA Times says…

More of this fall’s nonfiction releases

Sept. 14: “Unbound” by MeToo founder Tarana Burke. Sept. 21: “Vanderbilt: The Rise and Fall of an American Dynasty” by Anderson Cooper and Katherine Howe, “The Contrarian” by Max Chafkin, and “The End of Bias” by Jessica Nordell. Sept. 28: “Bourdain: The Definitive Oral Biography” by his former assistant Laurie Woolever, “The Baseball 100” by Joe Posnanski, and “Believing” by Anita Hill.

Oct. 5: Dave Grohl’s “The Storyteller: Tales of Life and Music.” Oct. 12: “Capote’s Women” by Laurence Leamer. Oct. 19: “Everything and Less: The Novel in the Age of Amazon” by Mark McGurl. Oct. 22: Teju Cole’s essay collection “Black Paper: Writing in a Dark Time.” Oct. 26: “Harlots, Whores & Hackabouts: A History of Sex for Sale” by Kate Lister.

Nov. 2: “Both/And: A Life in Many Worlds” by Huma Abedin. Nov. 9: Emily Ratajkowski’s essay collection “My Body” and Will Smith’s memoir “Will.” Nov. 16: “Viral: The Search for the Origin of Covid-19” by Matt Ridley and Alina Chan, and “The 1619 Project: A New Origin Story,” a compendium created by Nikole Hannah-Jones, Nov. 23: Ann Patchett’s collection of essays “These Precious Days.” Nov. 30: Brene Brown’s “Atlas of the Heart.”

Some of this fall’s new novels

TIME says “fall is the season of literary bounty.” Here are some of the notable novels that are already selling well, based on my scan of Amazon pre-orders:

Sept. 7: “Beautiful World, Where Are You” by Sally Rooney, “Forgotten in Death” by J.D. Robb, “The Great Glorious Goddamn of It All” by Josh Ritter, and “Matrix” by Lauren Groff. Sept. 14: “Harlem Shuffle” by Colson Whitehead, “Apples Never Fall” by Liane Moriarty, and “The Love Hypothesis” by Ali Hazelwood. Sept. 28: “The Wish” by Nicholas Sparks. Oct. 5: “The Lincoln Highway” by Amor Towles. Oct. 12: Hillary Clinton and Louise Penny’s “State of Terror.” Oct. 19: “The Judge’s List” by John Grisham. Nov. 23: “Go Tell the Bees That I Am Gone” by Diana Gabaldon.

>> For more, Fortune has “the top 10 most anticipated books this fall, according to Goodreads…”

— Newsroom transitions: New editors taking the reins this fall include Julie Pace at The AP, Mitch Pugh at the Chicago Tribune, and Sewell Chan at The Texas Tribune…

— Speaking of Pace, she joined “Reliable” guest host John Avlon on Sunday and discussed her vision for the AP’s future, including its role in “amplifying facts particularly in a time when there is so much disinformation out there…” (CNN)
— Speaking of… Aspen’s Commission on Information Disorder will publish a report full of recommendations in the early fall…
— I think we’ll hear more about FB reducing political content in News Feed this fall. Remember, the company said it expected to “announce further expansions in the coming months…”
— I’m amazed that Nick Quah was able to keep this list so short! He offers “9 new and returning podcasts to listen to this fall…” (Vulture)

Broadway is coming back to life

“On Sept. 14, four of the industry’s tentpole shows — ‘The Lion King,’ ‘Wicked,’ ‘Hamilton’ and ‘Chicago’ — will reopen, with many more musicals planning to start or restart performances throughout the fall,” the NYT’s Michael Paulson wrote. “Hadestown” and “Waitress” are already back. Vaccinations are a must, of course. Times Square’s TKTS booth, shuttered since March 2020, will also reopen on the 14th…
>> The Broadway League is running a “This Is Broadway” campaign to woo fans…

I’d say they missed some! Here are a few more: “Sex and the City” sequel “And Just Like That…” is slated for a TBA launch this fall. “The Problem With Jon Stewart” starts Sept. 30 on Apple TV+. “Yellowstone” returns to Paramount on Nov. 7.

>> For a much more comprehensive calendar of TV premiere dates, check out Sandra Gonzalez’s list for CNN.com here…
>> “Several long-running shows will sign off during the fourth quarter,” Brian Lowry notes in his fall preview column…

Brian Lowry writes: “The awards buzz out of the fall festivals over the weekend reflected what appeared to be a fair amount of irrational (and perhaps pent-up) exuberance, as well as enthusiasm for the Oscar speculation, which appears undaunted in circles that focus on such things while ignoring how few people watched the last ceremony. Venice and Telluride did provide boons to a number of films on that score, with the sci-fi epic ‘Dune’ and ‘Spencer’ (the Princess Diana biopic starring Kristen Stewart) among the more buzzworthy titles, along with ‘King Richard’ (generating raves for Will Smith).”

Lowry adds: “In the meantime, the strong results over the weekend for ‘Shang-Chi and the Legend of the Ten Rings’ surely played a role in Sony’s decision to move up its Marvel entry ‘Venom: Let There Be Carnage’ by two weeks, to Oct. 1. Other high-profile titles due that month include ‘The Sopranos’ prequel ‘The Many Saints of Newark’ on Oct. 1, Cannes winner ‘Titane’ on Oct. 1, and ‘Last Night in Soho’ on Oct. 29. And as I noted in my TV preview, look for an unusual number of musicals, with ‘Come From Away’ on Apple TV+ this Friday; ‘Dear Evan Hansen’ (which beat it for the 2017 Tony) and ‘Everyone’s Talking About Jamie’ in theaters this month; and ‘West Side Story’ due on Dec. 10…”
>> The LAT has a full list of fall releases here, including the next James Bond film, “No Time to Die,” on Oct. 8…

— “Dancing With the Stars” will include the show’s first-ever same-sex dancing pair when it premieres on Sept. 20

— The next hearing in Britney Spears’ case is slated for Sept. 29

— The Fox Weather app/streaming service is expected to launch in October, the same month Fox News turns 25
— The “Seinfeld” library is arriving on Netflix on Oct. 1; Rich Greenfield predicts that “interest in Seinfeld will soar in Q4 2021”