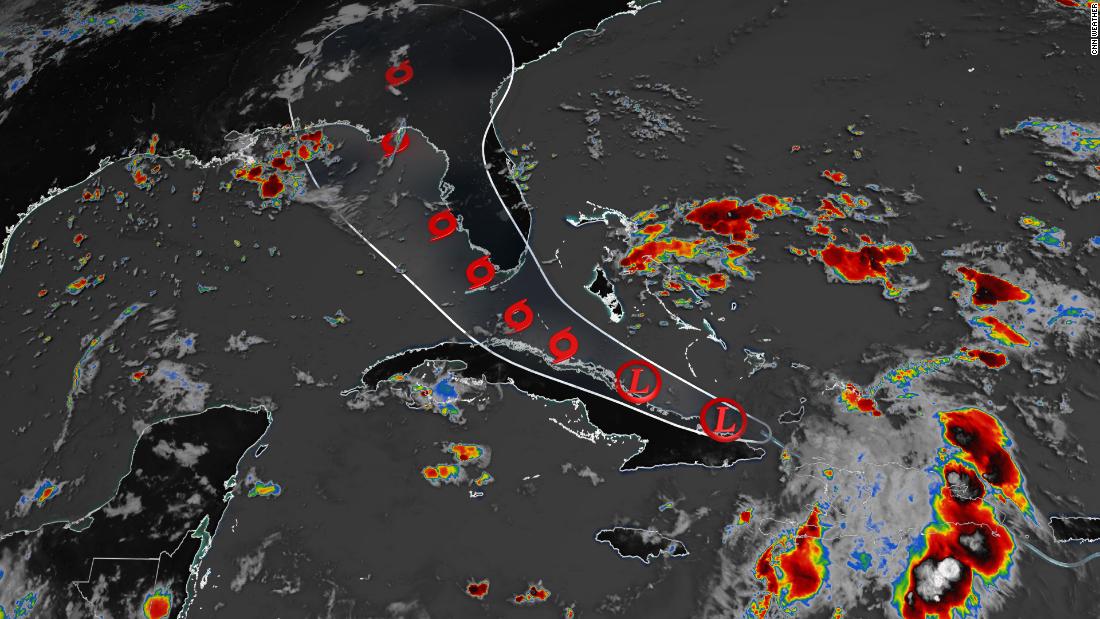 Still, Fred could restrengthen and deliver tropical storm conditions to the Florida Keys as early as this weekend and more of the Southeast early next week, the NHC says.

Thursday morning the center of the system is emerging back over water. It is located between Haiti, eastern Cuba, and the southeastern Bahamas.

The cloud formations were stretched out and it no longer resembles a storm when seen from satellite.

“What’s left of Fred will soon be in very warm water,” CNN meteorologist Chad Myers says. “It could certainly surprise forecasters with a quick restrengthening over open water.”

Over the next couple of days, Fred will continue to bring widespread rainfall to Hispaniola, Cuba and southern Florida. Flash, urban and small stream flooding are all likely as rainfall amounts could range from 3 to 5 inches and isolated amounts up to 8 inches.

The storm is forecast to hug the northern coast of Cuba and begin to take a northerly turn this weekend toward the US.

“Some strengthening seems likely when Fred is approaching the Florida Keys and south Florida Friday night and Saturday,” the NHC forecasts.

Suppose the forecast holds and the storm does restrengthen. In that case, it will move over the Florida Keys Saturday as a tropical storm.

From there, the storm’s strength will really be determined by how close the center of the storm is to Florida.

“The intensity forecast becomes more complicated by how much land interaction there will be with Florida,” the NHC says.

Suppose it stays further in the Gulf of Mexico, like the current forecast track shows. In that case, it will remain in a much more favorable environment to strengthen.

Computer forecast models disagree on the exact track this will take and how strong the storm will be. Some show Fred moving up the spine of Florida as a weak system while others move the storm out into the Gulf of Mexico and strengthening.

“The European model is much more bullish on this scenario and will need to be watched closely in the coming days,” Myers says.

The main threat from this storm will be rainfall.

Heavy rainfall associated with Fred will impact the remainder of Florida and parts of the Southeast, like Georgia, this weekend and next week. Storm surge is also a threat if it strengthens in the Gulf and moves along the west coast of Florida.