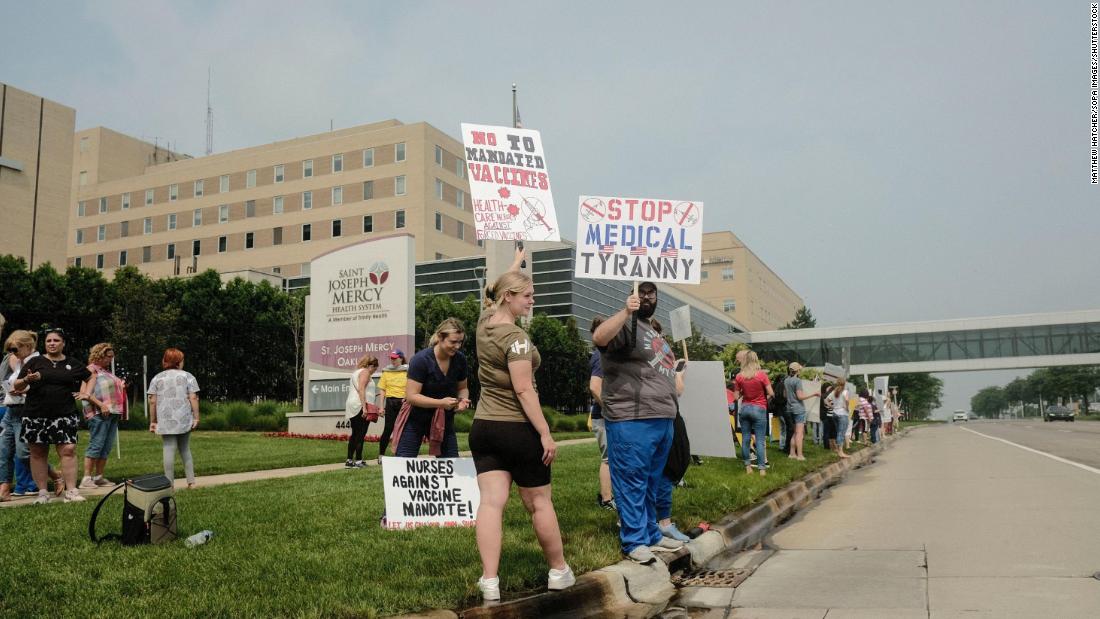 The federal government — the nation’s largest employer — will require unvaccinated employees to wear masks while working and get regular testing, and take other precautions, like maintaining physical distance from coworkers and restricting work travel. Several states, including Hawaii, California, Maryland, Virginia and Washington, also say unvaccinated state workers must get regular tests.
California Gov. Gavin Newsom on Wednesday broadly extended such a mandate to teachers and all school employees, the first state to do so.

Employers, fearing a backlash, frame the policy as a choice, with both sides of the equation seen as effective in reducing the spread of Covid-19. Do public health experts think this approach will help?

All agreed the best solution is universal vaccination. Short of that, many said the moves by employers will add a layer of protection — although how much remains to be seen.

Test results are “really only a snapshot in time,” said Dr. Gigi Kwik Gronvall, an associate professor at Johns Hopkins Bloomberg School of Public Health. Even testing every day, as was the standard in the Trump White House — without other measures like masking — didn’t prevent staffers from falling ill last fall.

And daily testing is cumbersome and costly.

Employers hope the hassles required to remain unvaccinated in the workplace will encourage the reluctant to just get a vaccine. “It’s a forceful nudge,” said Dr. Georges Benjamin, executive director of the American Public Health Association.

But there are challenges, too. Here’s what several experts had to say:

Getting all eligible people vaccinated is “the perfect way out of this whole situation,” said Dr. Marcus Plescia, chief medical officer at the Association of State and Territorial Health Officers. “But, given the realities of the current situation, I think it’s reasonable that employers and others who are setting up vaccine requirements offer some accommodations.”

But much depends, he and others said, on how well the rules are enforced.

“If (unvaccinated) people are wearing masks all day at work, even in the break room, that alone is pretty strong,” he said. “When you add in the testing, it’s an alternative that is going to have some value.”

Some employers, he noted, are reluctant to set such edicts because they fear losing employees, particularly in areas already suffering shortages, such as nursing homes.

This approach relies somewhat on the honor system

Some states, health care organizations and New York City say they’ll require proof of vaccination — a copy of an employee’s vaccination certificate or a version uploaded into an app on a person’s phone. But other employers say they will allow workers to self-attest that they’ve had the vaccine.

“There will be some folks who fib, no doubt about that,” said Dr. William Schaffner, professor of medicine in the division of infectious diseases at Vanderbilt University School of Medicine in Nashville.

“That will raise the issue of annoyance and concern by the vaccinated people,” Schaffner said. “They will say, ‘Wait a minute, Charlie is here and he’s not wearing a mask and we know he’s not vaccinated.’ People know that sort of stuff about their coworkers.”

There are other consequences.

There is online traffic in buying forged vaccination cards, designed to look like the real thing from the Centers for Disease Control and Prevention — even though that is illegal and can lead to fines or even jail time, the FBI has warned. Employers could also take disciplinary action against workers who falsely state they’ve been vaccinated.
As for test results, it’s less clear how the honor system will apply. Some workers — especially those in health care organizations — may well be able to get their tests done in-house. Other companies may allow workers to find (and pay for) outside testing. It isn’t known whether employers will allow the use of self-administered home tests. And what kind of test companies require matters, since the rapid antigen tests are not as reliable as the standard PCR versions. To complicate matters, rising demand for tests during the surge has led to long lines for both kinds of tests in some parts of the country, and results for the more accurate PCR version may take days.

Frequency of testing will vary and may not be ideal

Many of the workplace edicts — including the one for federal workers — call for weekly or twice-a-week testing. Is that enough? It’s hard to give an exact answer.

Dr. Robert Wachter, professor and chair of the department of medicine at the University of California, San Francisco, prefers tests be performed twice a week, especially given the explosion of cases in many parts of the country.

“If you’re only testing once a week, there will be some cases that slip through,” Wachter said. “You could get tested on a Monday, infected on Tuesday and could infect someone else that Friday or Saturday.”

While some employers may pick up the cost, at least initially, not all will. And workers should not count on testing being fully covered by their health insurers, either. They may well have to pay out-of-pocket for employer-required tests.

“Generally, health insurance providers are covering covid tests that are taken for diagnosing or treating a patient — if they are displaying symptoms or have had contact with someone who has been diagnosed with covid,” said Kristine Grow, a spokesperson for AHIP (America’s Health Insurance Plans), the industry’s lobbying group.

But, she noted, guidance issued last year by several federal agencies said that testing “conducted to screen for general workplace health and safety, for public health surveillance, or for any other purpose not primarily intended for diagnosis or treatment” does not have to be covered by insurers.