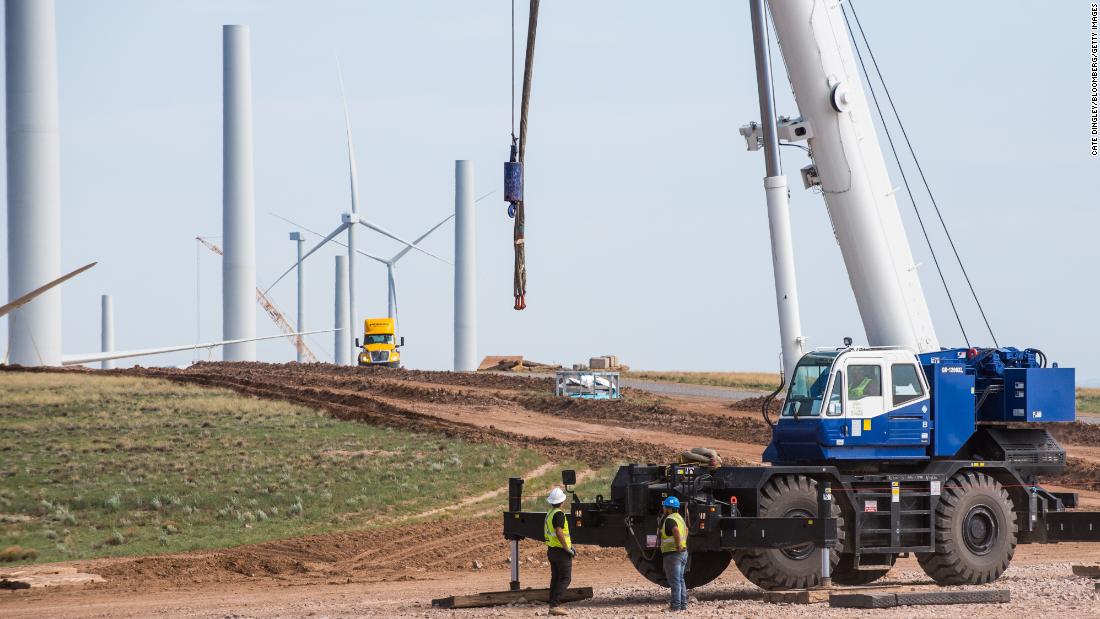 A report from independent firm Analysis Group, shared exclusively with CNN, finds that if Congress passes a $150 billion Clean Electricity Payment Program, it would increase the US workforce by 7.7 million new jobs and add nearly $1 trillion to the economy by 2031. The analysis was commissioned by Evergreen Action and the Natural Resources Defense Council, environmental groups that have advocated for stronger renewable energy policies.

“These are new jobs; jobs that otherwise would not exist absent the CEPP,” Pavel Darling, one of the report’s authors, told CNN.

A Clean Electricity Payment Program, which lawmakers in Congress are still drafting, would give incentives and payments to electric utilities who increase the amount of renewables in their electricity portfolio, while penalizing those who keep using fossil fuels.

Congress is currently considering an approximately $150 billion program, although that figure could change.

“A lot of times we focus on the powerful impact of this policy of reducing carbon pollution, but this analysis clearly shows the economic benefits to the country,” Democratic Sen. Tina Smith of Minnesota, who has been the main CEPP advocate in the Senate, told CNN.

Smith added that the jobs will not be concentrated in one state or region. For instance, the report shows a massive potential for solar in the Southeastern US, and onshore wind in the Midwest and West.

“This is not going to be a boon for California, or one place or another. This will be spread broadly throughout the country,” Smith said.

Many of the employment opportunities would be in construction, building infrastructure for wind, solar, and other forms of renewable energy to power America’s electrical grid, Darling said. Jobs in retail and manufacturing would also increase, the analysis found.

“Spending money and stimulating economic activity has this incremental effect as those monies ripple through the economy,” Darling told CNN.

In addition, because the CEPP is largely an incentives-based program that gives federal money to utilities to transition off fossil fuels, it doesn’t force utilities to immediately retire their existing fossil fuel resources — which could result in job losses.

“The CEPP builds out a lot of renewable resources, but it doesn’t have as much of a negative impact on existing resources because a lot of those resources remain online,” Darling said.

Joel Jaeger, a research associate at the World Resource Institute’s Climate Program who was not involved with the analysis, told CNN the results of the Analysis Group study “seem quite reasonable.”

“Modeling scenarios are always approximations, but they’re definitely in the right order of magnitude based on what I’ve seen in previous economic analysis,” Jaeger told CNN in an email. “The most important thing from this study is that the economic impacts are positive, not negative. If passed, the Clean Electricity Payment Program and clean energy tax credits would be the most impactful piece climate legislation in US history, and this study shows that it will not be a cost to the economy, it’ll be a benefit. That’s a no brainer.”

This isn’t the only study showing the potential for job growth in renewable energy. The Analysis Group report comes a day after President Joe Biden’s Department of Energy released its Solar Futures study, which showed solar energy has the potential to power 40% of the nation’s electricity and employ as many as 1.5 million people by 2035.
Biden in April announced a target for the US to cut greenhouse gas emissions by 50-52% relative to 2005 levels by 2030. The Biden administration and congressional Democrats believe the vast majority of that goal could be reached with a CEPP, combined with expanding tax credits for renewable energy like wind and solar. A separate analysis from Senate Majority Leader Chuck Schumer found close to 42% of Biden’s target could be achieved from a CEPP and renewable energy tax incentives.
Democrats are focusing on electricity as their silver bullet to decarbonize because it has the potential to be a dominant form of energy in the US economy; it can power zero-emissions vehicles and heat and cool buildings, and cut down fossil fuel emissions for other parts of the economy. But the electricity itself needs to come from renewable sources.

“Clean electricity ends up being a catalyst for an entire clean economy,” said Leah Stokes, a senior policy advisor at Evergreen and associate professor of political science at the University of California, Santa Barbara. “It turns out we can use clean electricity to clean up our transportation, our buildings and even part of heavy industry.”

Another design of a CEPP is that by giving federal payments to utilities, it can theoretically help keep rates low for consumers — particularly while utilities are transitioning away from fossil fuels.

“This is an investment by the federal government for keeping electricity bills low while cleaning up the electricity system,” Stokes said. “If we don’t have that investment, utilities could be pushing costs up for people.”

The Analysis Group study shows the majority of the economic benefits and jobs from a CEPP would likely come in the latter part of the decade as programs ramp up to meet Biden’s goal of 80% clean electricity by 2030.

The report also assumes that future administrations will stick to Biden’s 2030 target. CEPP proponents say if Congress passes the program and the US Department of Energy gets it up and running soon, utilities will adopt it and factor it into their longterm planning, creating immunity from political changes.

“The only way it could be reversed is through further [Congressional] action down the road,” Arjun Krishnaswami, the climate policy lead with NRDC’s Climate and Clean Energy program, told CNN.