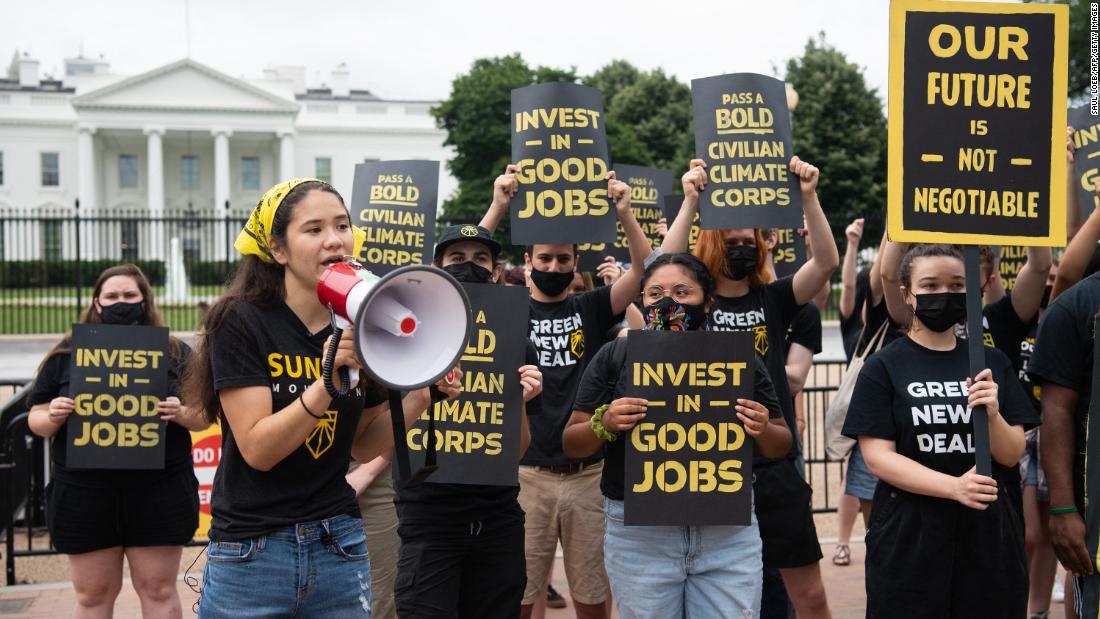 Progressive groups including the Sunrise Movement, Justice Democrats and People’s Action are targeting lawmakers including Democratic Sens. Joe Manchin of West Virginia and Sherrod Brown of Ohio, and House Committee Chairs Bobby Scott, Frank Pallone, and Richard Neal, with a phone-banking blitz over recess, according to exclusive details shared with CNN.

“The challenge we face right now is lack of political will because the GOP and oil and gas executives are frankly holding climate action hostage,” Sunrise executive director Varshini Prakash told CNN. “We’re calling our Representatives and Senators because they should be listening to us, not Exxon.”

Pointing to the dire findings in the UN’s Intergovernmental Panel on Climate Change report, which showed world nations must get their economies to net-zero emissions or risk climate catastrophe, Prakash said the groups would be demanding swift action on climate from Congress.

“Sunrise members across the country will flood the offices of 5 key Democrats who hold leadership positions on committees that will decide if components of the Green New Deal become a reality in 2021,” Prakash said. “The latest IPCC report, and the climate disasters our politicians can literally see outside, must be a wake-up call that what they’re doing right now is utterly insufficient to stop the climate crisis.”

Advocates will spend recess making thousands of phone calls to lawmakers, urging them to add sweeping climate legislation to the reconciliation package.

The groups shared their top five demands with CNN: “Bold” investments in public housing, schools, transit, and renewable energy, a fully funded Civilian Climate Corps, worker protections in the labor bill known as the PRO Act, an end to fossil fuel subsidies, and at least 40% of investments going to front-line communities — a campaign commitment from President Joe Biden.

“There are negotiations happening right now over the size of the Civilian Climate Corps, and with the IPCC report, we know Democrats must fully fund climate jobs because it could be our last chance,” Justice Democrats’ spokesperson Waleed Shahid told CNN in a statement.

A digital ad by Organize For Justice urges Virginia Rep. Bobby Scott, the chairman of the House Committee on Education and Labor to fully fund a Civilian Climate Corps — which has become a top demand of progressive climate activists.

These groups aren’t the only ones putting the spotlight on climate action during August recess.

Last week, the League of Conservation Voters and Climate Power announced they plan to host at least 31 events in Arizona, Georgia, Michigan, New Hampshire, and Nevada to encourage lawmakers to go big on climate spending in reconciliation. Those groups will spend more than $10 million in paid advertisements, in addition to another $10 million in advertising they announced last month.

“We absolutely expect all members of Congress, but particularly every Democratic senator to seize this moment,” Tiernan Sittenfeld, the senior vice president of government affairs for the League of Conservation Voters, told CNN in a recent interview. “The scale of the climate crisis is immense. We have to act now, we’re out of time.”