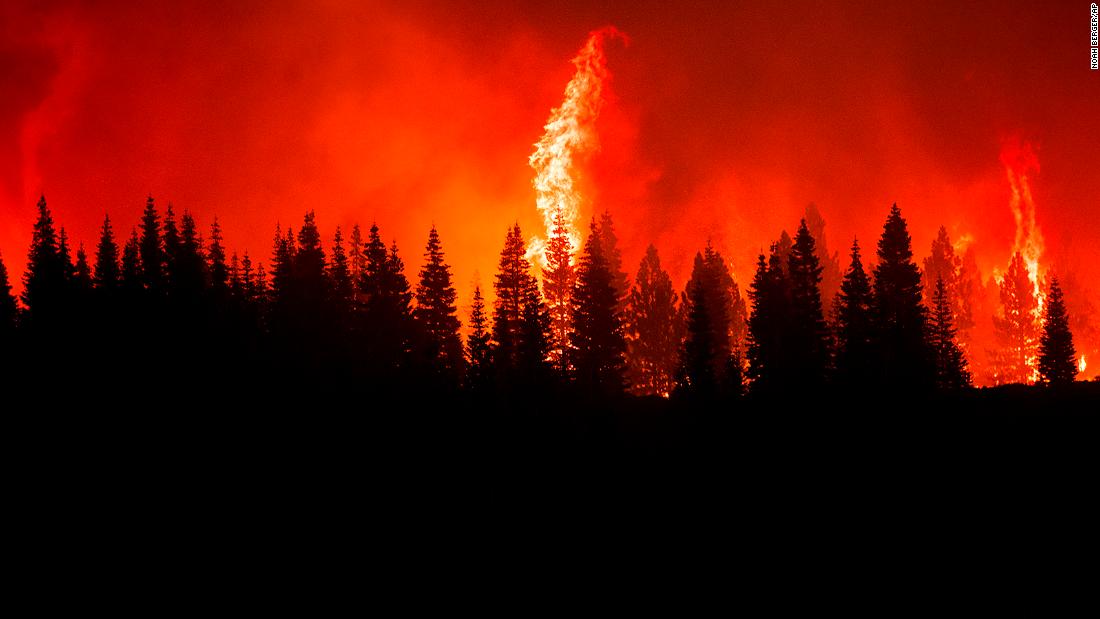 “It’s one thing to lose vegetation, which is bad in itself, but when you start to lose people’s property, it changes the dynamics,” says Jesse Alexander, the fire chief for the Yuba City Fire Department in California.

He and his crew have been on the front lines on some of the most destructive California wildfires in history — the Camp, Thomas and Glass fires to name a few.

They have witnessed loss beyond measure and are yet again in the midst of another devastating fire season.

“The first couple of days on the fire, most of us pull 48-hour shifts with no sleep. Firefighters are getting woken up with little sleep. Pulled out of hotels, pulled out of tents to go save the properties at risk,” said Hollingshead. “When people’s homes are in danger, there’s no stopping us.”

So far this year, California has seen at least 548,000 more acres burned compared to last year’s record-breaking fire season at this point in the year.

California is currently in its 11th driest year on record, with no relief in sight. The Dixie Fire has burned over 446,000 acres so far and is only 21% contained.

“This is an extremely trying time for firefighting personnel. They are faced with extreme challenges because their firefighting efforts are being overrun by the way the fire is burning, so we have to adapt and overcome in that sense,” said Hollingshead.

‘When we watch a house burn to the ground, it’s devastating to see’

It’s also challenging because the burn scars are still fresh from the Camp Fire that devastated this same region in 2018.

That fire devastated the town of Paradise, and now Greenville is mostly gone. For many in the department, they fought hard for both of these towns, but were overrun by the flames.

Several in the department lost their homes in the Camp Fire, while others are losing them now. “When there’s a community in danger, it dramatically changes how we do things,” said Alexander.

Hollingshead was on the front lines of the Camp Fire for 40 days. His mom and dad both lost their homes, and he had to break the news.

“There was another person on the engine with me who also lost his home. It was at that point we both decided we would stay on the job until the very end.

Because it starts to get personal when it affects people you know or your own homes,” said Hollingshead.

“During the Camp Fire, I looked across at guys who live in Paradise, not knowing if their house is there,” said Alexander.

“I was talking to individuals who had no idea where their family was. They were pretty confident that their house was gone and they knew their family was there during that period of time, but where is my family? Did they make it out safe? Communication lines are horrible at that point during those fires,” said Alexander.

But they still worked as hard as they could during those trying days to save their town and to save their families. “It’s completely different when you are fighting a fire in your own community. It’s your family, your relative, your friends or just those areas that you are familiar with and you go to every day.

“We are used to seeing destruction, but when it’s in your own backyard, it makes such a significant impact,” he says.

The endless fight on the front lines

But amid all the devastation, their spirits remain high. “As far as morale goes. Morale is still at an all-time high. I see interactive crews on a daily basis here and everyone is still positive, but it’s extremely painful and hard to see what we are seeing out here and to see what the communities are having to go throughout here,” said Hollingshead.

The firefighters on the front lines still have the passion to continue even though the conditions are getting worse and worse. But as a fire chief, Alexander says he’s extremely nervous for his team.

“I’m more concerned about being able to prepare the troops to do the best they can and to be safe as they can,” he said. “It’s one thing to be smart and savvy with your fire behavior analysis, but when you get a firenado there’s not a whole lot you can do to keep yourself safe and that always makes me nervous. Because even the best-trained firefighter with the best equipment, there’s still that potential that they are going to be in a circumstance they weren’t expecting,” he said.

For his team, the rising flames and thick smoke is what drives them harder. They have a fighting spirit that burns inside them to keep fighting even when the task at hand is the biggest they’ve seen.

“There are a lot of firefighters out here who are fighting this fire and they don’t know if their home is still standing. But I’ll tell you one thing. We are committed and we are dedicated and we won’t give up and we won’t quit until the fire is out,” said Hollingshead.

As climate change continues to cause temperatures to rise and fire seasons to worsen, Alexander is seeing it from a front-row seat.

“Conditions are definitely changing. You are seeing these erratic fire events happen more frequently,” he said.

That erratic behavior is something that residents can’t roll the dice on. Leaving your home ahead of a fire is difficult, but something you have to do, he says.

“We have those times when we have gone above and beyond and put ourselves in extreme risk to go in. That person is going to die right now if we don’t go in and get them out and you just can’t run from a house with a family and kids, it’s just not something firefighters do,” he says.

Whether it’s their own families in Paradise or strangers in another town, their commitment is to protect life and property, and they will do it with their whole heart, until the fight is fought.

“We’ve seen how hard it is for a community to rebuild. Paradise is still struggling since 2018 to get everything up. It’s a completely different community. It takes a toll on a community.” And now Greenville will be facing the same road Paradise faced just 3 years ago.

“Our hearts go out to the public, but we are committed and dedicated and there is no quitting in us,” said Hollingshead.