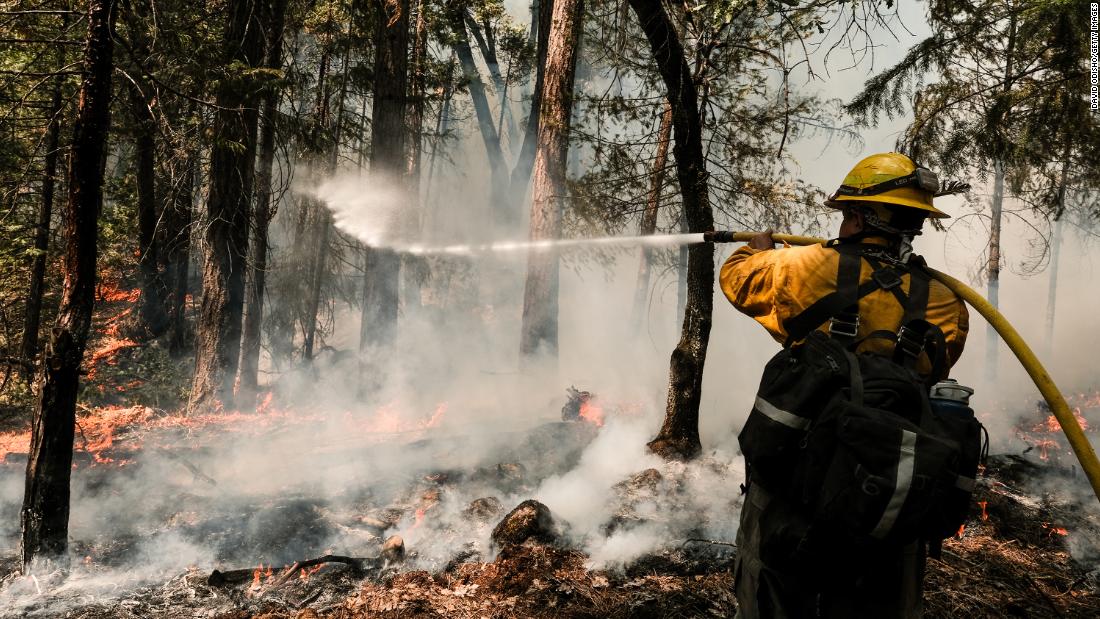 “Fire managers prepare for a potential increase in initial attack and overall fire activity in the Northern California, Northwest, Northern Rockies and Great Basin areas due to hot temperatures, dry fuels and predicted dry lightning,” the National Interagency Fire Center said in its Tuesday update.
As of Tuesday, more than 26,000 firefighters and support staff were battling 108 wildfires that have burned 2.4 million acres in 15 states, NIFC said.
The nation’s largest wildfire — the Dixie Fire — has been steadily growing over the past month in northern California, where thousands were forced to evacuate, hundreds of structures were destroyed and an entire town was nearly leveled to the ground.

By Tuesday, the state’s second-largest wildfire in history had charred 490,205 acres and was 27% contained.

“Crews worked aggressively throughout the day to extinguish hot spots and improve containment lines. Heavy smoke settled in the area reducing visibility. High temperatures, gusty winds and dry vegetation still have the potential to fuel fire growth,” the California Department of Forestry and Fire Protection, known as Cal Fire, said in an update on its website.

The fire has obliterated 893 structures, including homes and commercial buildings as well as smaller outbuildings and sheds. Another 61 structures were damaged, and more than 16,000 structures remain at risk.

The town of Greenville in Plumas County was nearly leveled when the fire swept through it. Roughly every business in the city’s commercial center appeared to have collapsed or been gutted, with flames still flickering in the debris, video recorded last week by storm chaser Brandon Clement showed.

Gov. Gavin Newsom declared a state of emergency for the counties affected by the Dixie Fire, along with the McFarland and Monument Fires, which themselves had burned an additional 85,000 acres. The Dixie Fire is burning across Butte, Plumas, Lassen and Tehama counties.

More than 12,000 people across eight counties were under evacuation orders from the 11 large fires, according to the California Governor’s Office of Emergency Services.

California’s wildfire season has been exacerbated by the severe drought condition and the climate change crisis.

To date, wildfires have seared more than 917,000 acres, which is a dramatic increase of 233% over the same period last year, becoming the state’s worst wildfire year on record, according to Cal Fire.

“Hopefully this is not a trend that will continue,” Daniel Berlant, Cal Fire’s assistant deputy director, said in an update.

As extreme heat is expected to grip the West this week, Oregon Gov. Kate Brown has declared a state of emergency.

The order was “triggered by the need for state agencies to assist local and Tribal jurisdictions” as they provide for the health and safety for the residence, the governor’s office said in a news release.

“Oregon is facing yet another extreme heat wave, and it is critical that every level of government has the resources they need to help keep Oregonians safe and healthy,” Brown said in the news release.

Additionally, portions of Oregon are under excessive heat warning from Wednesday afternoon until Saturday night, according to the NWS Portland office.

Oregon has 17 wildfires that have burned nearly 600,000 acres, according to the NIFC.

Meanwhile, the National Weather Service has also issued an excessive heat watch for parts of Washington, including the Seattle metro area. The watch begins Wednesday and will last through the weekend.

The NWS in Seattle predicted that temperatures will range from 98 to 100 degrees.

“Extreme heat and humidity will significantly increase the potential for heat related illnesses, particularly for those working or participating in outdoor activities,” NWS Seattle said.

There are currently 15 wildfires burning in Washington that have scorched roughly 250,00 acres.