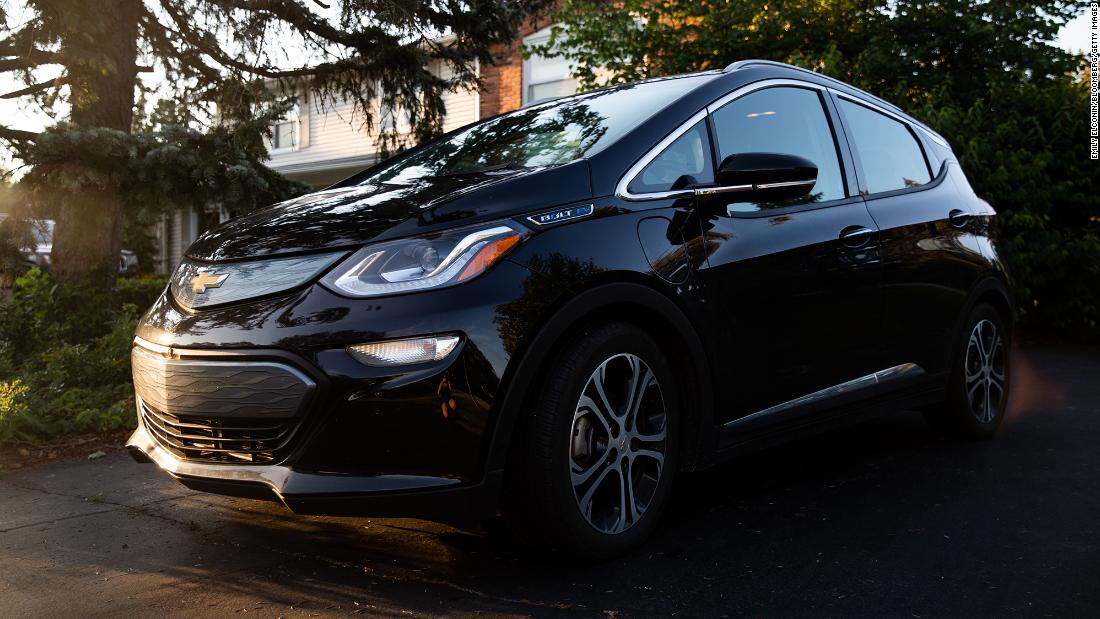 GM had warned that some of the cars could have a manufacturing defect that might cause them to catch fire. For safety’s sake, the automaker recommended Bolt owners restrict their use of the car to avoid straining the batteries, and park them away from their homes.

So far, Chevrolet Bolts have been blamed for 12 fires, according to GM.

The restrictions turned owning what had been a very practical electric car into a huge inconvenience, Schoenfeld said. GM offered to lend him a different car, but it would have been gasoline-powered, since GM doesn’t currently sell any electric vehicles but the Bolt. GM once sold a plug-in hybrid called the Volt, but that car went out of production in 2019. To Schoenfeld, a different GM car wasn’t a viable alternative. So instead, GM bought his Bolt back from him.

“I’m very eco-conscious,” he said. “I’ve got my solar and my geothermal in my house and I don’t want to burn fossil fuels.”

In a process that took weeks to finally work out, Schoenfeld sold his Chevrolet Bolt EV back to GM for a price that was at about $10,000 more than he would have gotten simply by trading the car in to a dealer, he said, though he declined to provide specific numbers.

It’s a solution that many Bolt owners are resorting to, according to numerous social media reports and CNN Business interviews.

GM would not say how many vehicles it has bought back from customers. The company said it is deciding whether to buy back individual cars or not on a “case-by-case” basis. Alternatively, GM is also offering to exchange the car for another GM vehicle.

Brandon Neider, an information technology manager who also owns an auto detailing company in Yonkers, New York, has also submitted paperwork for a buyback, a process he’s been told could take a few weeks given the number of requests.

“I really am not comfortable having this vehicle at this point,” Neider said. “I’m not done with the brand but you know, these guys don’t even know how long this is going to take to resolve.”

GM first announced a recall of the Chevy Bolt electric vehicles in November 2020 due to fire risk, but it didn’t have an immediate fix. In May, it announced a software repair, but then there were two fires involving Bolts that had received that fix, prompting another recall in July of 70,000 vehicles. A month later, the automaker issued a recall on another 70,000 cars.

GM spokesman Kevin Kelly said the company will begin replacing battery modules on Bolt EVs, at no charge to the owner, once it has confidence that its battery supplier, LG Energy Solution, is producing defect-free batteries. There is no specific time frame in which that’s expected to happen though, he said. NHTSA is also investigating the cause of the fires.

“We don’t have clear solutions yet as we’re investigating the cause of the fire,” a spokesperson for LG Energy Solution said.

The LG spokesperson also said that, since the issue is still being investigated, the company could not comment on whether the root cause was an LG manufacturing issue.

In the meantime, GM has recommended owners use their vehicles in ways that minimize stress on the batteries. That entails taking shorter trips and not allowing the batteries to charge too fully or drain too much.

Several Chevrolet Bolt EV owners interviewed for this story, some of whom didn’t want their names published because they are still in discussions with the automaker, said they loved their electric cars and weren’t upset at GM for the defect.

Although the process took weeks and involved lots of paperwork, Schoenfeld said all the customer service people he dealt with were kind, understanding and helpful.

Most of the other Bolt EV owners CNN Business spoke with were less sanguine on the customer service issue.

“I was on hold for one hour and 55 minutes listening to that god-awful music,” said one man.

One woman in upstate New York, who was concerned about the safety of her home in the event the Bolt began burning, said GM offered her a 150-foot charging cable that would have allowed her to charge her car far away from her wooden house. But later, she said, another GM representative told her that no such cord existed. GM confirmed to CNN Business that there is no charging cord that long.

Several people said they are asking for buybacks because they purchased the car expecting it to be able to go a certain distance between charges, up to 259 miles for the most recent models.

In announcing the most recent recalls, GM recommended people not charge the battery to more 90% of its capacity. They also recommended that people not drain the battery to less than about 70 miles of range. That effectively reduced the driving range of even the longest-range models to about 163 miles, according to EPA estimates. In real-world driving, Chevrolet Bolts, like other vehicles, electric or not, often don’t achieve their EPA-estimated range.

GM also recommended that people not charge their cars indoors overnight and that they park the cars outdoors immediately after charging. GM also recommended, when parking in a garage, parking on the top floor or an open deck and parking at least 50 feet away from any other vehicle.

“After every use, after I come home in the evening, I have get up in the middle of the night to unplug the car,” said Schoenfeld.

GM customer service representatives suggested solutions, short of selling back the car, that also weren’t helpful, some people claimed. Two people described being offered rental car reimbursement but they were asked to submit their rental car receipts at the end of each month. That would have meant racking up hundreds of dollars in rental car charges before even requesting repayment. GM did not confirm specifically how it handles rental car reimbursement.

Not all owners are thinking of getting rid of their cars, though. Many would rather keep their Bolt, abide by GM’s suggested usage limits, and wait for the problem to be fixed.

“It seems like a small risk that we were willing to accept until Chevy can replace the battery,” said Sally Heaven, a Bolt owner in Maryland. “We also don’t have a garage, so our car is parked in the driveway.”

For those who decide to request a buyback, the process is time consuming and there is a lot of paperwork involved. GM would not explain exactly how it decides which cars to buy back other than to say “We continue to evaluate buyback requests from Bolt EV owners on a case-by-case basis.”

The formula used by GM in calculating a car’s value, according to a brochure provided by the automaker, involves taking the full amount paid and deducting a small amount for each mile driven plus other things like any purchase incentives that were received from GM and the cost of removing modifications made by the customer. It’s similar to calculations used in Lemon Law settlements, said Steve Lehto, a Michigan attorney who specializes in auto-related consumer law.

In agreeing to these buyback deals, said Lehto, GM is probably looking at the Lemon Laws and other warranty-related laws in each state. Every state has such laws, but they vary in details and enforcement, he said. Even though customers might not specifically invoke the laws, they provide a basis for GM to understand what it ultimately could be forced to do if a customer were to push the issue in court.

For now, some Bolt owners said they are looking at other electric cars. Both Schoenfeld and Neider said they have ordered Tesla Model 3s.