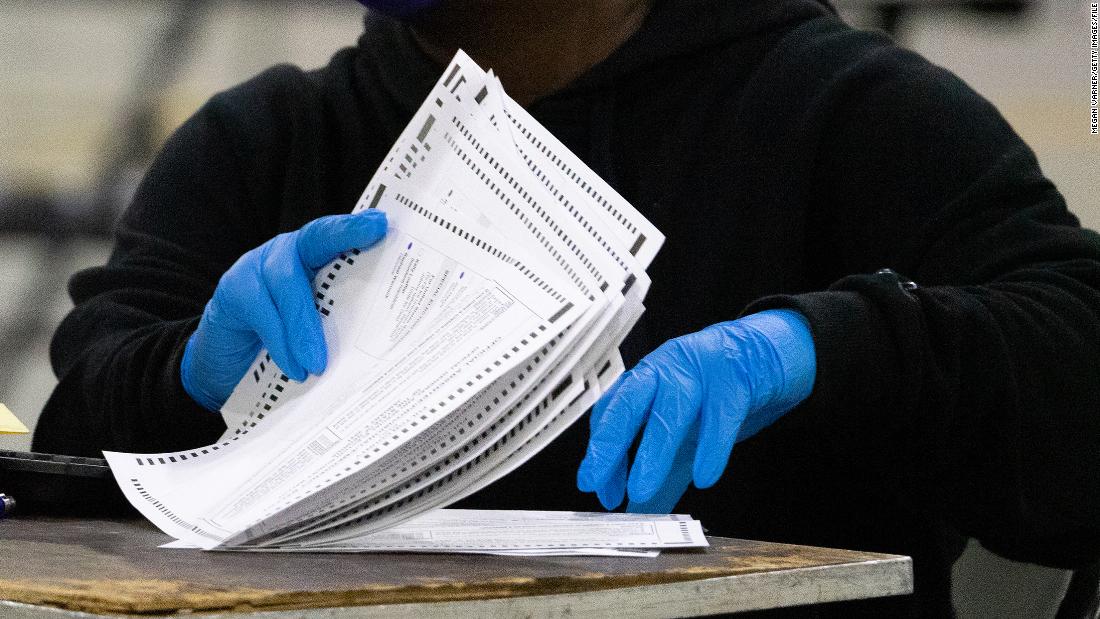 The activity stems from the creation earlier this summer of a Department of Justice task force to address the rising threats of violence against those officials. And it raises hopes among some election administrators that individuals might finally be held to account for the barrage of threats spurred by falsehoods that the 2020 election was stolen from former President Donald Trump.

“I don’t think people should be able to call with impunity to say whatever they want and to make threats,” said Richard Barron, who oversees elections in Fulton County, Georgia, and has spoken recently with two FBI agents. “I hope they make some arrests.”

Barron said he and his staff faced a torrent of threats and abuse after Democratic electoral victories last year in the traditionally red state. He said he recently shared two death threats with local FBI officials, including one made earlier this summer that warned he “would be served lead.”
Other officials contacted recently by the FBI include Claire Woodall-Vogg, the executive director of the Milwaukee Election Commission. In a recent interview on CNN, Woodall-Vogg estimated that she had received more than 150 threats.

Following the airing of that interview earlier this week, Woodall-Vogg said she got another “really sinister” email that she has since forwarded to the FBI.

In Arizona — another state that flipped from red to blue last year — Bill Gates, a Republican member of the Maricopa County Board of Supervisors, said an FBI agent visited him in late August to discuss the tsunami of harassment and threats there.

The Justice Department declined on Friday to comment on any specific, ongoing investigations.

But agency spokesman Joshua Stueve said the DOJ is “committed to aggressively addressing threats of violence directed toward state and local election officials and workers” and is coordinating with federal, state and local officials to “combat this recent and entirely unacceptable phenomenon.”

And in a statement, John Keller, a top attorney in the DOJ’s Public Integrity section who heads the new election task force, said the agency has specially designated federal agents and prosecutors “in every jurisdiction in the country” to work on the issue and is supplementing efforts by local and state authorities.

DOJ officials say they are looking for patterns in the threats, including whether “common actors” are targeting multiple election administrators.

The agency conducted training in July for FBI agents and US Attorney Offices on the issue. Top DOJ brass and FBI Director Christopher Wray also met with some 1,400 election officials late last month.

Any federal cases the Justice Department pursues likely would be brought under a cluster of existing statutes that deal with issues such as using the mail or “interstate communications” to make threats, the officials said.

A new voting rights bill introduced by Senate Democrats earlier this week would specifically make harassing election officials, workers and volunteers a federal crime, punishable by up to five years in prison. (That bill faces almost insurmountable odds in the Senate, where it is expected to fall short of the 60 votes needed to overcome a Republican-led filibuster.)

David Becker, a former Justice Department lawyer who runs the Center for Election Innovation & Research, said he’s talked to dozens of election supervisors this year and has reviewed the messages they’ve received.

“They are credible threats, by any measure,” he said. “There’s no question in my mind if they were directed at the president of the United States, the Secret Service would be at someone’s door in 24 hours.”

But Becker, who recently helped launch a network to provide free legal help to beleaguered election administrators, said the Justice Department has never had to confront this kind of task before: establishing the federal infrastructure to deal with an avalanche of threats against the people who run elections.

Becker said he has “a hard time remembering even one threat against an election official of this sort” during his career. “And we’ve seen hundreds of these cases in the last year.”

Some state officials say they need even more federal help, including money to monitor threats and provide security.

Kim Rogers, the executive director of the Democratic Association of Secretaries of State, said her organization is considering helping to underwrite some of the security costs for the election chiefs who are members of the group.

“Without resources to monitor threats or provide security, the (DOJ) task force is of little comfort,” she said.

“We urge the Department of Justice to invest the resources needed to proactively monitor, report, and address threats,” she added. “Until then, we will continue to step up to ensure the safety of our secretaries.”

The threats against election officials, the persistent falsehoods about the 2020 election and a wave of new laws in Republican-controlled states that seek to usurp the authority of election officials have raised concerns of a potential mass exodus of experienced officials from the election workforce.

Nearly one in three local election officials included in a survey this year by the liberal-leaning Brennan Center for Justice reported feeling unsafe because of their jobs.

“We don’t have much more time before the bullying and intimidation of election officials results in a mass exodus,” Becker said.

In Maricopa County, where someone recently mailed an orange jumpsuit to the county’s supervisors and talked of them going to jail, Gates isn’t sure that the FBI’s stepped-up activity will result in arrests or change anyone’s behavior.

Instead, he said more of his fellow Republicans need to speak up and tell the truth about the 2020 election. “Tell people that No. 1: Joe Biden won and we need move on to the next election, but also, that it’s not right to threaten election administrators,” he said.

Gates added: “If more Republicans start speaking out, then we can move forward… The silence has been deafening from most in my party.”