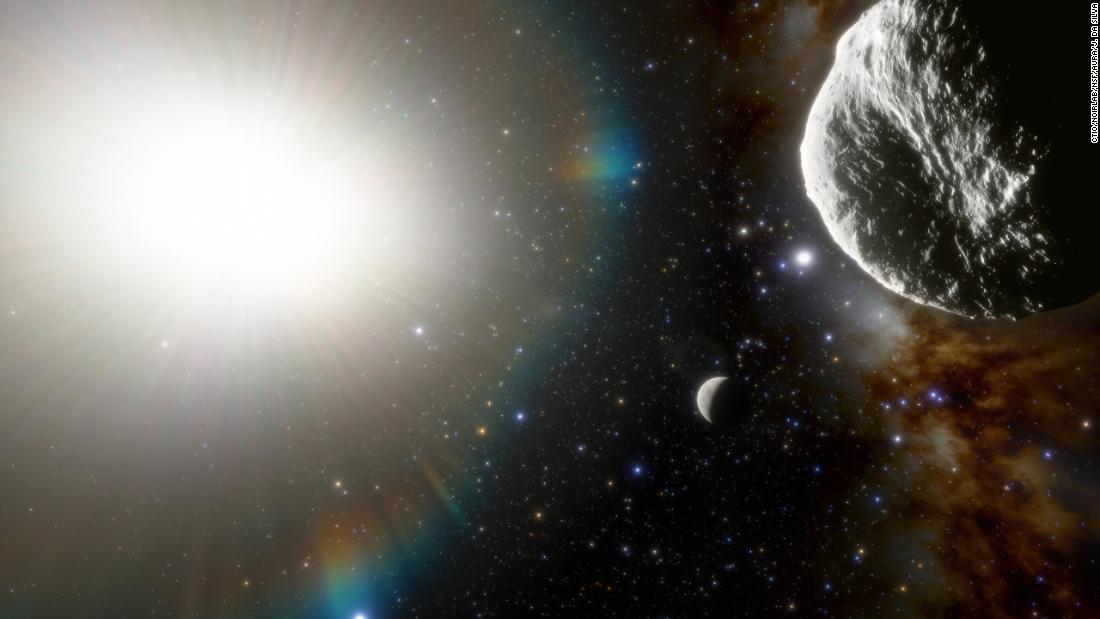 Meet the fastest asteroid in our solar system, which zips around the sun every 113 days. This artist’s rendering shows the asteroid 2021 PH27 (top right) and Mercury (below) orbiting the sun.

A ghostly set of X-ray rings were found around a black hole with a companion star. These rings are created by light echoes.

This image, taken with the Atacama Large Millimeter/submillimeter Array in Chile, shows the PDS 70 system 400 light-years away. This planetary system is still forming and still in the process of being formed. One of the planets in the system has a moon-forming disk around it.

This image shows supernova 2018zd (pictured as the large white dot on the right), a new type of supernova called an electron capture. To the left is the galaxy NGC 2146.

This image from the STARFORGE simulation shows the “Anvil of Creation,” a giant gas cloud with individual stars forming inside of it.

Astronomers used NASA’s Chandra X-ray Observatory to study the supernova remnant Cassiopeia A and discovered titanium, shown in light blue, blasting out of it. The colors represent other elements detected, like iron (orange), oxygen (purple), silicon (red) and magnesium (green).

The supermassive black hole at the center of the M87 galaxy, the first to ever be imaged, can now be seen in polarized light. Swirling lines reveal the magnetic field near the edge of the black hole.

This image from the Sloan Digital Sky Survey shows the galaxy J0437+2456, which includes a supermassive black hole at its center that appears to be moving.

This artist’s impression shows how the distant quasar P172+18 and its radio jets may have looked 13 billion years ago. The light from the quasar has taken that long to reach us, so astronomers observed the quasar as it looked in the early universe.

This image shows the vicinity of the Tucana II ultrafaint dwarf galaxy, captured by the SkyMapper telescope.

These images show two giant radio galaxies found with using the MeerKAT telescope. The red in both images shows the radio light being emitted by the galaxies against a background of the sky as it is seen in visible light.

This artist’s conception of quasar J0313-1806 depicts it as it was 670 million years after the Big Bang. Quasars are highly energetic objects at the centers of galaxies, powered by black holes and brighter than entire galaxies.

Shown here is a phenomenon known as zodiacal light, which is caused by sunlight reflecting off tiny dust particles in the inner solar system.

This artist’s impression of the distant galaxy ID2299 shows some of its gas being ejected by a “tidal tail” as a result of a merger between two galaxies.

This diagram shows the two most important companion galaxies to the Milky Way: the Large Magellanic Cloud (left) and the Small Magellanic Cloud. It was made using data from the European Space Agency Gaia satellite.

The Blue Ring Nebula is thought to be a never-before-seen phase that occurs after the merger of two stars. Debris flowing out from the merger was sliced by a disk around one of the stars, creating two cones of material glowing in ultraviolet light.

The red supergiant star Betelgeuse, in the constellation of Orion, experienced unprecedented dimming late in 2019. This image was taken in January using the European Southern Observatory’s Very Large Telescope.

This is an infrared image of Apep, a Wolf-Rayet star binary system located 8,000 light-years from Earth.

An artist’s illustration, left, helps visualize the details of an unusual star system, GW Orionis, in the Orion constellation. The system’s circumstellar disk is broken, resulting in misaligned rings around its three stars.

This is a simulation of two spiral black holes that merge and emit gravitational waves.

This artist’s illustration shows the unexpected dimming of the star Betelgeuse.

This extremely distant galaxy, which looks similar to our own Milky Way, appears like a ring of light.

The blue dot at the center of this image marks the approximate location of a supernova event which occurred 140 million light-years from Earth, where a white dwarf exploded and created an ultraviolet flash. It was located close to tail of the Draco constellation.

When a star’s mass is ejected during a supernova, it expands quickly. Eventually, it will slow and form a hot bubble of glowing gas. A white dwarf will emerge from this gas bubble and move across the galaxy.

The afterglow of short gamma ray burst that was detected 10 billion light-years away is shown here in a circle. This image was taken by the Gemini-North telescope.

This Hubble Space Telescope image shows NGC 7513, a barred spiral galaxy 60 million light-years away. Due to the expansion of the universe, the galaxy appears to be moving away from the Milky Way at an accelerate rate.

This artist’s concept illustration shows what the luminous blue variable star in the Kinman Dwarf galaxy may have looked like before it mysteriously disappeared.

This is an artist’s illustration of a supermassive black hole and its surrounding disk of gas. Inside this disk are two smaller black holes orbiting one another. Researchers identified a flare of light suspected to have come from one such binary pair soon after they merged into a larger black hole.

This image, taken from a video, shows what happens as two objects of different masses merge together and create gravitational waves.

This is an artist’s impression showing the detection of a repeating fast radio burst seen in blue, which is in orbit with an astrophysical object seen in pink.

Fast radio bursts, which make a splash by leaving their host galaxy in a bright burst of radio waves, helped detect “missing matter” in the universe.

Astronomers have discovered a rare type of galaxy described as a “cosmic ring of fire.” This artist’s illustration shows the galaxy as it existed 11 billion years ago.

This is an artist’s impression of the Wolfe Disk, a massive rotating disk galaxy in the early universe.

A bright yellow “twist” near the center of this image shows where a planet may be forming around the AB Aurigae star. The image was captured by the European Southern Observatory’s Very Large Telescope.

This artist’s illustration shows the orbits of two stars and an invisible black hole 1,000 light-years from Earth. This system includes one star (small orbit seen in blue) orbiting a newly discovered black hole (orbit in red), as well as a third star in a wider orbit (also in blue).

This illustration shows a star’s core, known as a white dwarf, pulled into orbit around a black hole. During each orbit, the black hole rips off more material from the star and pulls it into a glowing disk of material around the black hole. Before its encounter with the black hole, the star was a red giant in the last stages of stellar evolution.

This artist’s illustration shows the collision of two 125-mile-wide icy, dusty bodies orbiting the bright star Fomalhaut, located 25 light-years away. The observation of the aftermath of this collision was once thought to be an exoplanet.

This is an artist’s impression of the interstellar comet 2I/Borisov as it travels through our solar system. New observations detected carbon monixide in the cometary tail as the sun heated the comet.

This rosette pattern is the orbit of a star, called S2, around the supermassive black hole at the center of our Milky Way galaxy.

This is an artist’s illustration of SN2016aps, which astronomers believe is the brightest supernova ever observed.

This is an artist’s illustration of a brown dwarf, or a “failed star” object, and its magnetic field. The brown dwarf’s atmosphere and magnetic field rotate at different speeds, which allowed astronomers to determine wind speed on the object.

This artist’s illustration shows an intermediate-mass black hole tearing into a star.

This is an artist’s impression of a large star known as HD74423 and its much smaller red dwarf companion in a binary star system. The large star appears to pulsate on one side only, and it’s being distorted by the gravitational pull of its companion star into a teardrop shape.

This is an artist’s impression of two white dwarfs in the process of merging. While astronomers expected that this might cause a supernova, they have found an instance of two white dwarf stars that survived merging.

A combination of space and ground-based telescopes have found evidence for the biggest explosion seen in the universe. The explosion was created by a black hole located in the Ophiuchus cluster’s central galaxy, which has blasted out jets and carved a large cavity in the surrounding hot gas.

This new ALMA image shows the outcome of a stellar fight: a complex and stunning gas environment surrounding the binary star system HD101584.

A white dwarf, left, is pulling material off of a brown dwarf, right, about 3,000 light-years from Earth.

This image shows the orbits of the six G objects at the center of our galaxy, with the supermassive black hole indicated with a white cross. Stars, gas and dust are in the background.

After stars die, they expel their particles out into space, which form new stars in turn. In one case, stardust became embedded in a meteorite that fell to Earth. This illustration shows that stardust could flow from sources like the Egg Nebula to create the grains recovered from the meteorite, which landed in Australia.

The former North Star, Alpha Draconis or Thuban, is circled here in an image of the northern sky.

Galaxy UGC 2885, nicknamed the “Godzilla galaxy,” may be the largest one in the local universe.