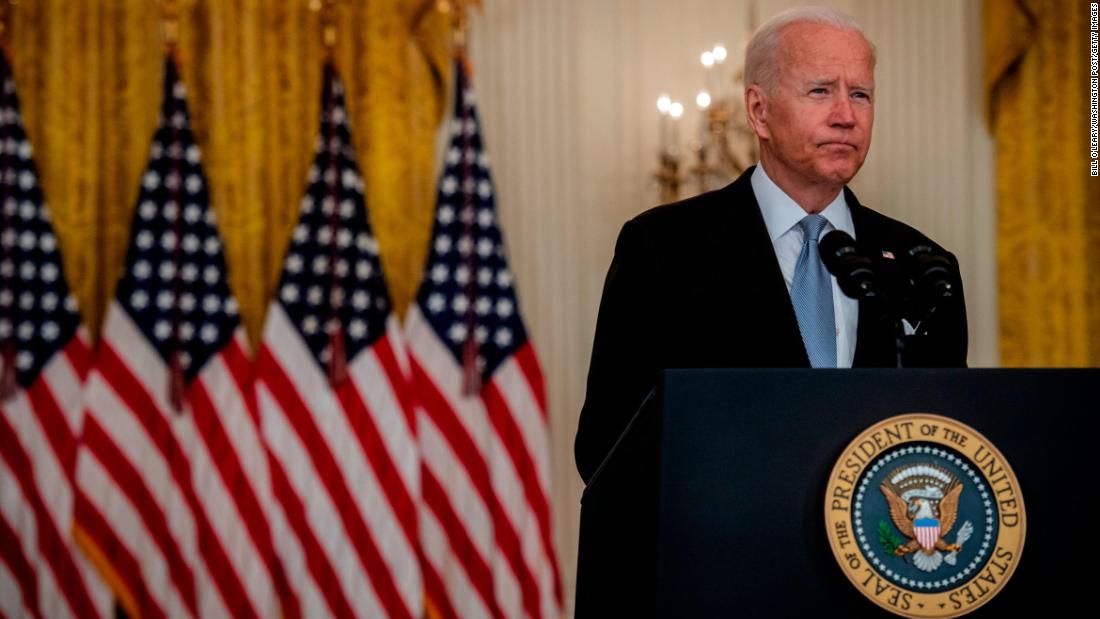 “We spent over a trillion dollars. We trained and equipped an Afghan military force of some 300,000 strong. Incredibly well equipped. A force larger in size than the militaries of many of our NATO allies. We gave them every tool they could need,” Biden said in a White House speech on Monday.
Biden also cited the “300,000” figure in previous speeches. And Secretary of State Antony Blinken used the figure in a CNN interview on Sunday with anchor Jake Tapper.
Figures on the size of the Afghan forces were consistently marred by the problem of so-called “ghost” fighters: no-show soldiers and police officers who were listed on the employee rolls only so corrupt people could collect their salaries. Even after the implementation of a biometric verification system to try to cut down on this fraud, it was never clear how many of the employees “were really showing up every day, as opposed to people who were paid to show up once to get enrolled,” said Jonathan Schroden, who has studied the Afghan forces as director of the Countering Threats and Challenges Program at CNA, a federally funded research and analysis organization in Virginia.
The government watchdog used the 300,000 figure — 300,699, to be precise — in the July report, saying this was the number reported by the US-led Combined Security Transition Command-Afghanistan as of late April. However, in the same report, the watchdog noted that it had repeatedly expressed “serious concerns” about corruption issues like “the existence of ghost soldiers and police” and about “the questionable accuracy of data on the actual strength of the force.” (The watchdog, called the Special Inspector General for Afghanistan Reconstruction, or SIGAR, also raised other concerns, such as the data not accounting for intangibles like “the will to fight.”)
The “ghost” fighters weren’t the only hole in the 300,000 figure. Persistently high turnover in the Afghan ranks meant that, at any given time, many military and police positions were either vacant or filled by legitimate employees who were not ready for battle.
“By 2020, Afghan security forces were still replacing a quarter of the force annually, which the U.S. military has come to view as normal,” the watchdog wrote in another report that was released this week.
Also, the 300,000 figure didn’t only count members of the actual military. Anthony Cordesman, the Arleigh A. Burke Chair in Strategy at the Center for Strategic and International Studies think tank and a former federal official, noted that the figure included both the military (182,071 people, according to the April figures used in the watchdog report in July) and the police (118,628 people, according to the report). Cordesman said it is “fundamentally dishonest” to “count police as troops,” since, he said, they were not sufficiently trained or equipped to fight Taliban forces.
Cordesman said it was common knowledge that “only a very limited number of units” in the Afghan forces were effective, “and they were being constantly overburdened, taking excessive causalities, deployed too quickly and sometimes for political reasons.” And Cordesman said that, in the absence of the military contractors and US troops that had left the country, many of the Afghan forces — which had low literacy levels — were unable to maintain and operate some of the key equipment they had been provided, including planes and land vehicles.

Though there is a widespread belief among experts that the 300,000 figure was too high, there is no consensus on any other single figure for the size of the Afghan forces before the Taliban victory. Schroden estimated that the true number was “likely” in the range of 150,000 to 200,000 people.