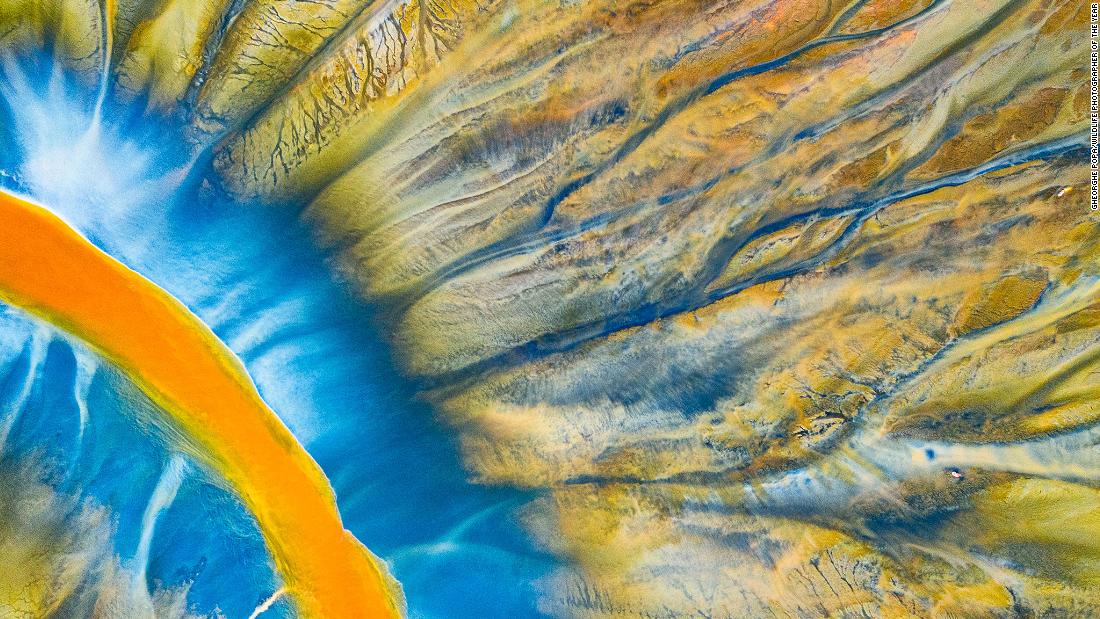 It’s easy to forget that amid the daily hustle and bustle of our lives — especially for those of us who only see wildlife when a bird or a squirrel darts by the window.

Remember when you were a kid and evidence of Earth’s menagerie was all around you? Whether we see them living in mighty jungles, grassy plains or desert oases, our view of animals shapes how we look at the world, from the time we’re just grasping how to speak, read and write.

A photograph of a wild animal can stop you in your tracks — for me, the first time was when I saw an image of a rare snow leopard when I was 6.
These images carry an intrinsic message, something we knew as children but maybe forgot: We can do more to protect our world and all of its life so future generations may share in the same joy of discovery.

Once upon a planet

Narwhal shrimp in the deep blue water of the French Mediterranean. Ghost fungus in Australia. Cheetahs battling to swim across a raging river.

These are some of the stunning entries to the Wildlife Photographer of the Year competition, organized by the Natural History Museum in London.

The photos reveal some of the wonder to be found in nature, as well as challenges our planet is facing due to the climate crises.

In the face of so much awe, don’t forget to laugh. Photographers also managed to capture animals at their funniest in the 2021 Comedy Wildlife Photo Awards — I’m torn between the goofy gophers and the grumpy bird. You can vote for the image that makes you chuckle the most until October 10.

The vast, inhospitable deserts across the Arabian Peninsula don’t seem ideal for a long trek, but ancient “Green Arabia” was much more welcoming to our early human ancestors.

Periods of heavy rainfall in the desert between 400,000 and 50,000 years ago created lush grasslands that served as the perfect backdrop for both animals and humans migrating to and from Africa.

Perhaps the most intriguing idea to result from this latest finding is that multiple species of early humans, including Neanderthals, may have interacted and mated in this area. While this helps fill a gap in human history, the discovery points to a more ancient mystery.

Sometimes, space gets a little complicated (and not just when we’re trying to figure out the universe).

Despite threatening to pull Russia out of the International Space Station prematurely, the head of the country’s space agency is now promising to remain NASA’s partner at least until the orbiting outpost is eventually retired. “This is a family, where a divorce within a station is not possible,” Dmitry Rogozin told CNN in his first interview with western media since becoming Roscosmos’ director general.
The Federal Aviation Administration is also investigating Richard Branson’s recent flight to space, saying the rocket-powered plane operated by his company, Virgin Galactic, veered off course during its descent.
But space doesn’t always have to be so serious. If you prefer to jam out to some stellar tunes while watching spacewalks, check out our out-of-this-world playlist. These songs are perfectly suited for listening while you watch a starman waiting in the sky. And who says food has to be boring on the space station? Watch these astronauts have a pizza party in space.

It’s been a rough week for many across the US facing natural disasters — including wildfires, drought and Hurricane Ida — that are only exacerbated by the climate crises.

Hurricane Ida forged a path of devastation from the southern states up through the Northeast, bringing unusually catastrophic flooding to New York City.

Human-caused climate change is making hurricanes stronger, slower and wetter. Scientists warn that storms like Ida will only become more common as the planet warms.
What can we do stop it? Deep cuts to greenhouse gas emissions and ending our dependence on fossil fuels could stave off some of the more catastrophic climate change impacts the world is currently experiencing.

If you’ve missed watching gymnastics since the Olympics ended, look no further than the wacky world of agile animals.

Meet spotted skunks. They’re “the acrobats of the skunk world,” and scientists have discovered more of these species than they previously thought existed.

To scare off predators, they perform an intimidatingly impressive handstand. The squirrel-sized skunks kick out their back legs, puff up their tails and rush at their attackers — they even use this trick to freak out mountain lions.
And while you may think that geckos can scale just about anything because they have sticky feet, guess again. When leaping from tree to tree, some of these lizards crash headfirst — but a remarkable (and awkward) maneuver allows them to land securely at ballistic speeds — and they owe it all to another part of their anatomy.

Consider these worthy of a double-take:

— Babies may have the cutest laughs ever — and infant laughter is very similar to that of another species.
— The fossil of Big John, the world’s largest Triceratops skeleton, is up for sale, but you’ll need deep pockets to bring him home.
— Mars is home to planet-encircling dust storms — just one reason we have to be able to forecast the weather on other worlds before we can visit them.
Like what you’ve read? Oh, but there’s more. Sign up here to receive in your inbox the next edition of Wonder Theory, brought to you by CNN Space and Science writer Ashley Strickland, who finds wonder in planets beyond our solar system and discoveries from the ancient world.