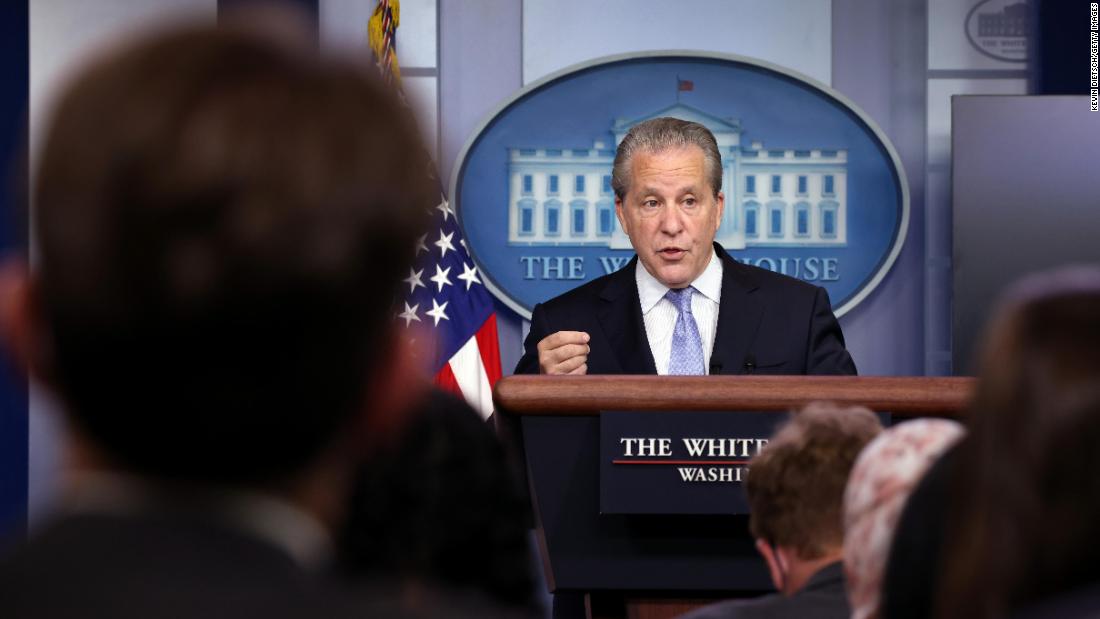 The effort ultimately came up short, the officials said, leaving millions of renters in the lurch and exposing a rare divide with Democratic members of Congress.

“I don’t think this means this President is going to give up,” said Gene Sperling, the White House official responsible for managing coronavirus relief efforts, during an afternoon briefing. “I think he’s going to keep looking, keep pushing.”

Still, Sperling and other White House officials made clear that even after renewed examination, the President’s authority to continue banning evictions was limited. Instead, the White House said it was working to prevent a major housing crisis by calling on states to accelerate rental assistance payments and pass their own laws banning evictions.

But a disconnect with Congress was still evident, as Democratic leaders continued to call on Biden to extend the moratorium even though his administration made clear he lacks the legal authority to do it.

The White House and congressional Democrats each sought to explain how a long-anticipated sunset of a nationwide eviction moratorium appeared to catch them by surprise last week, allowing the provision to expire and leaving millions of renters in the lurch.

The back-and-forth exposed a rare divide between President Joe Biden and members of his party and led to veiled accusations of who was to blame. An estimated 11.4 million adult renters are behind on rent, according to the Center on Budget and Policy Priorities. Legal aid groups have said the ban’s expiration caused a flood of calls from tenants fearing imminent eviction.

Progressive Democrats, some of whom camped out of the steps of the Capitol to bring attention to the issue, said it was Biden’s fault for throwing the matter on Congress 60 hours before the moratorium expired. They have questioned why he is unwilling to extend the ban in the face of an unfavorable Supreme Court ruling.

The White House, while not explicitly blaming congressional leaders, insisted the parameters of the situation have been evident to everyone since late June, when the court ruled further extensions of the freeze would require Congress’ backing. And they accused the Trump administration of leaving them unworkable guidelines for distributing rental assistance that has bottle-necked at the state level without reaching those who need it.

Underpinning everything, administration officials said, is the recent spike in Covid-19 cases caused by the highly contagious Delta variant, which lent fresh urgency to keeping people in their homes and not in settings where the outbreak could be exacerbated, like shelters or on the street.

Biden himself did not respond to shouted questions about the eviction issue when he returned midday Monday to the White House from Camp David. Vice President Kamala Harris, visiting the Senate Monday afternoon, sidestepped a question about why the administration won’t extend the eviction moratorium administratively.

The episode, which has yet to be resolved, underscored the ways the recent spike in Covid-19 cases upended Democrats’ agenda after the pandemic appeared to be waning just a month ago.

Originally conceived as an emergency health measure to prevent the spread of coronavirus, the eviction moratorium was not a major public priority until last Thursday, when the White House said Biden would be forced to allow it to expire rather than challenging the Supreme Court’s ruling.

That left almost no time for Democratic lawmakers to pass legislation to extend the eviction ban and caused many to accuse the White House of blindsiding them with the responsibility.

“We thought the White House was in charge,” Rep. Maxine Waters, who sponsored a measure to extend the moratorium, said over the weekend.

Even after the moratorium expired at midnight Sunday, House Speaker Nancy Pelosi continued to publicly press the administration to extend it, despite clear indications from the White House it wasn’t legally feasible. She called it a “moral imperative.”

At the White House, officials spent the weekend debating the scope of Biden’s ability to extend the moratorium, despite an earlier determination by the White House counsel’s office that doing so could risk a more harmful ruling down the line limiting the administration’s ability to enact other emergency public health rules.

Some on Biden’s team pressed internally for a reexamination of the legal determination over the past week, but White House lawyers said there was no gray area in the decision.

“We spent a lot of time looking at it. The Supreme Court ruling is very clear,” one official told CNN.

On Sunday, Biden asked the US Centers for Disease Control and Prevention to explore their own legal options for a narrower eviction ban only in areas with high rates of Covid-19 transmission. But the agency came back a day later to say they did not believe such authority existed.

By Monday afternoon, Sperling insisted Biden was still “kicking the tires” on his authorities for extending the freeze on evictions, even as the White House called on state governments to pass their own moratoria. Sperling also downplayed the likelihood that the President could convince administration lawyers to change their determination on his legal options.

“He has double, triple, quadruple checked,” said Sperling, underscoring that while Biden continues to explore his own authorities, state governments should work harder to distribute billions in unused housing relief dollars.

So far only a small percentage of the $47 billion program has been disbursed, a shortfall the White House has pinned on states it says have been too slow to act.

“If some states and localities can get this out efficiently and effectively, there’s no reason every state and locality can’t,” Sperling said. “There’s simply no excuse, no place to hide for any state or locality that is failing to accelerate the emergency rental assistance fund.”