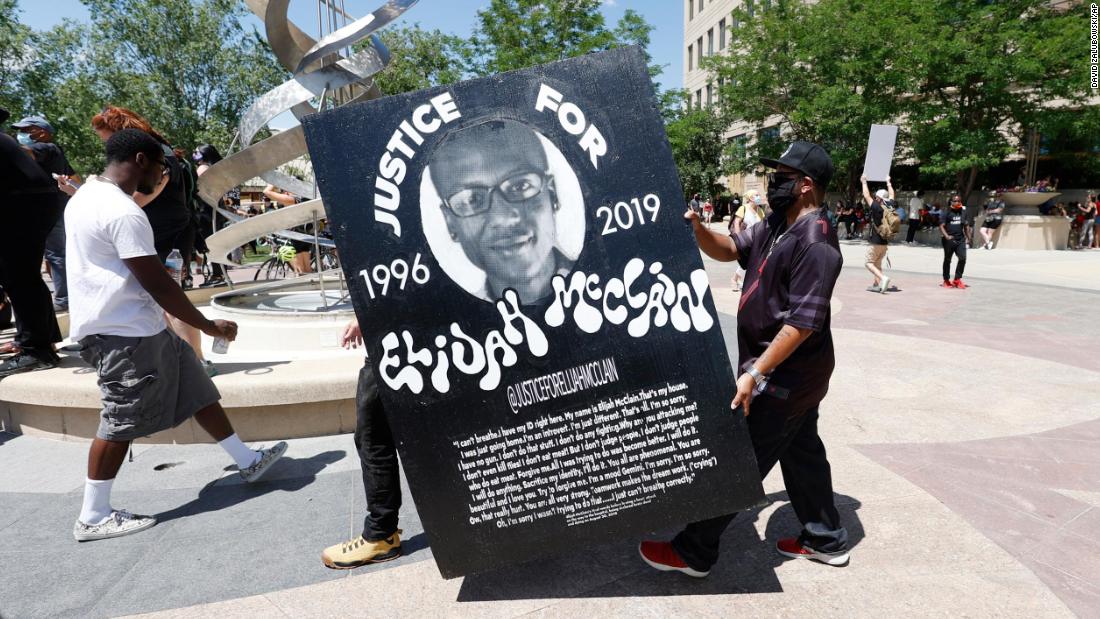 Asked if he felt the charges were a long time coming, Mosley said, “Yes. Better late than never.”

Colorado Attorney General Phil Weiser announced the indictments Wednesday, just over two years since the 23-year-old Black man died after he was stopped by Aurora police officers while walking home from a store, placed in a carotid hold and injected with ketamine.

Two Aurora police officers, one former officer and two paramedics were each indicted on charges of manslaughter and criminally negligent homicide, among other charges, as part of a 32-count indictment.

But McClain — described by his father as a “caring” and “sweet person” who “cared more about others’ feelings than his own” — won’t get justice until those involved in his death go to jail, Mosley told CNN.

“These indictments here in Colorado serve not just as a reminder to the law enforcement officers here but across the entire country that they are not above the law,” Mari Newman, an attorney for McClain’s family, told CNN’s Kate Bolduan Thursday.

In 2019, the Adams County District Attorney declined to bring criminal charges, but the case gained more attention last June amid a nationwide reckoning over racial injustice after the police killings of George Floyd and Breonna Taylor.
Gov. Jared Polis announced a re-examination of the case, and Weiser was appointed as special prosecutor and opened a grand jury investigation into McClain’s death in January.

The indictment detailed the moments leading to McClain’s death, after officers received a call about a “sketchy” person wearing a ski mask. McClain, who was walking home from a convenience store, was confronted by the officers but “resisted contact,” a police news release at the time said.

Officers tried to physically restrain McClain, the indictment states, leading to a struggle. In video recorded by body cameras, McClain, who had earbuds in his ears, is heard telling the officers he was trying to stop his music so he could listen to them.

The indictment says officers twice placed McClain in a carotid control hold. McClain briefly lost consciousness, the indictment states, but continued to struggle with officers after waking up. Officers also put him in handcuffs and held him on the ground despite repeated pleas that he could not breathe, the document states.

Paramedics arrived at the scene and diagnosed McClain with “excited delirium,” a controversial diagnosis that describes violent agitation. Neither paramedic checked his vital signs, talked to McClain or touched him before making the diagnosis, the indictment states.

They then injected McClain with a dose of the sedative drug ketamine based on an estimate that he was 200 pounds; he in fact weighed 143 pounds, according to the indictment.

McClain never regained consciousness and was declared brain-dead on August 27, the indictment states.

Newman acknowledged Floyd’s death — and the murder conviction of a former Minneapolis police officer who knelt on Floyd — impacted McClain’s case. The indictment announced Wednesday would not have happened without the national attention on Floyd’s death, she said.

“It’s horrible that it took the tragic death of another man across the country to bring attention to Aurora, Colorado,” Newman said. “We all know — those of us who have been doing this work for decades as I have, and of course Black men like LaWayne, who have lived in this world — that racist police brutality has been a scourge in Colorado and across the United States for decades or even centuries.”

“Elijah was such a peaceful person,” she said. “I mean, if Elijah McClain was not safe walking on the streets in this world, then no Black man is safe.”

“If there’s any case where there should be charges brought, this is the one.”

CNN’s Emma Tucker and Eric Levenson contributed to this report.