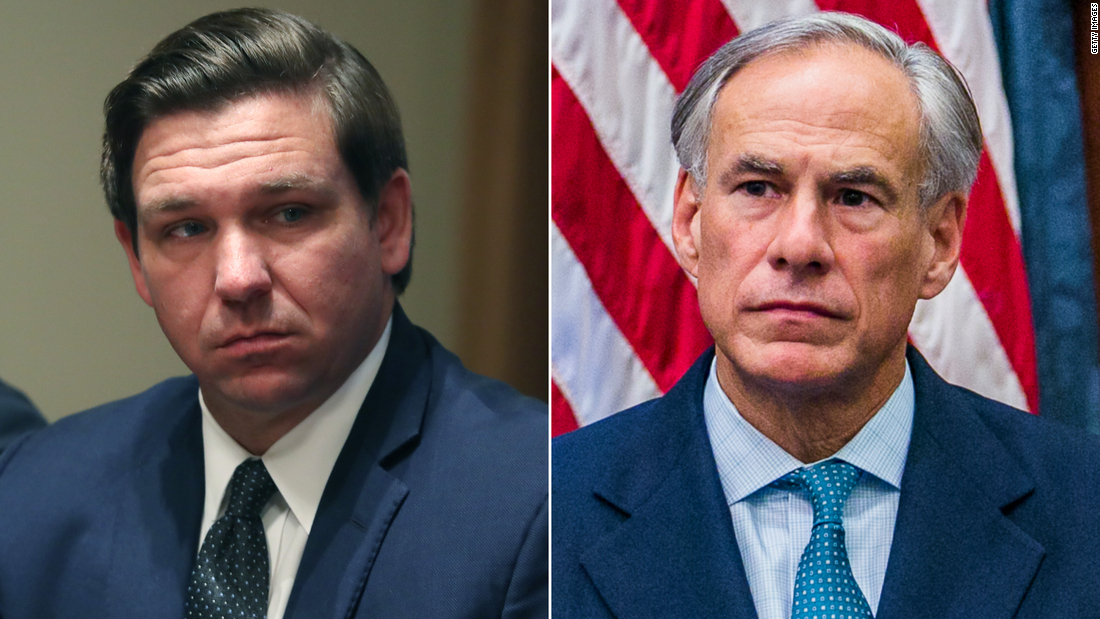 In the new letters to Govs. Ron DeSantis of Florida and Greg Abbott of Texas, Education Secretary Miguel Cardona stressed that their respective states’ school mask policies go against “science-based strategies for preventing the spread of COVID-19” and sharply voiced the Biden administration’s support for the states’ educators.

Cardona wrote to DeSantis that he is “deeply concerned” by the governor’s executive order issued last month directing health and education departments to leave it to parents to decide if students wear masks. Cardona also took aim at the recent threat from the governor’s office that the state board of education could move to withhold the salaries of superintendents and school board members who disregard his executive order, which effectively prohibits mask mandates.

“The Department recognizes that several school districts in your State have already moved to adopt such policies in line with guidance from the CDC for the reopening and operation of school facilities despite the State level prohibitions. The Department stands with these dedicated educators who are working to safely reopen schools and maintain safe in-person instruction,” Cardona wrote in the letter, which was also addressed to Florida Education Commissioner Richard Corcoran.

In Texas, Abbott prohibits mask mandates, but two judges there have issued restraining orders temporarily blocking the enforcement of his order. Cardona sent a similar warning to Abbott and the state’s education commissioner, Mike Morath, underscoring that “Texas’s recent actions to block school districts from voluntarily adopting science-based strategies for preventing the spread of COVID-19 that are aligned with the guidance from the Centers for Disease Control and Prevention (CDC) puts these goals at risk and may infringe upon a school district’s authority to adopt policies to protect students and educators as they develop their safe return to in-person instruction plans required by Federal law.”
Cardona’s direct messages come as President Joe Biden and members of his administration have specifically targeted the governors of Florida and Texas for standing in the way of mask and vaccine requirements, pointing to the extraordinary amount of Covid cases and hospitalizations in their states.

CNN’s requests for comment from the offices of both governors and state education commissioners were not immediately returned Friday.

The letters followed statements from White House press secretary Jen Psaki earlier this week, who told reporters that the White House and federal government are continuing to look for ways to support local school districts and educators in Florida “as they try to follow the science, do the right thing and save lives.”

Psaki said later that paying for salaries could be a part of that, and the Department of Education is looking at options. Withholding funds is not the intention, she said.

In Friday’s letter to DeSantis and Corcoran, Cardona pointed to how Florida school districts can use funds from federal Covid relief for educators’ salaries, noting that “any threat by Florida to withhold salaries from superintendents and school board members who are working to protect students and educators (or to levy other financial penalties) can be addressed using ESSER funds at the sole and complete discretion of Florida school districts.”

In the letter to the Florida Association of School Administrators on Friday, Cardona further emphasized the administration’s support for the state’s educators: “I want you to know that the U.S. Department of Education stands with you. Your decisions are vital to safely reopen schools and maintain safe in-person instruction, and they are undoubtedly in the best interest of your students.”

Implementing mask requirements in schools has become a politicized topic of debate in some states across the country. As of last week, at least seven states — Arkansas, Arizona, Iowa, Oklahoma, South Carolina, Texas and Utah — prohibit districts from requiring masks in schools, although there are efforts underway to push back against those bans.